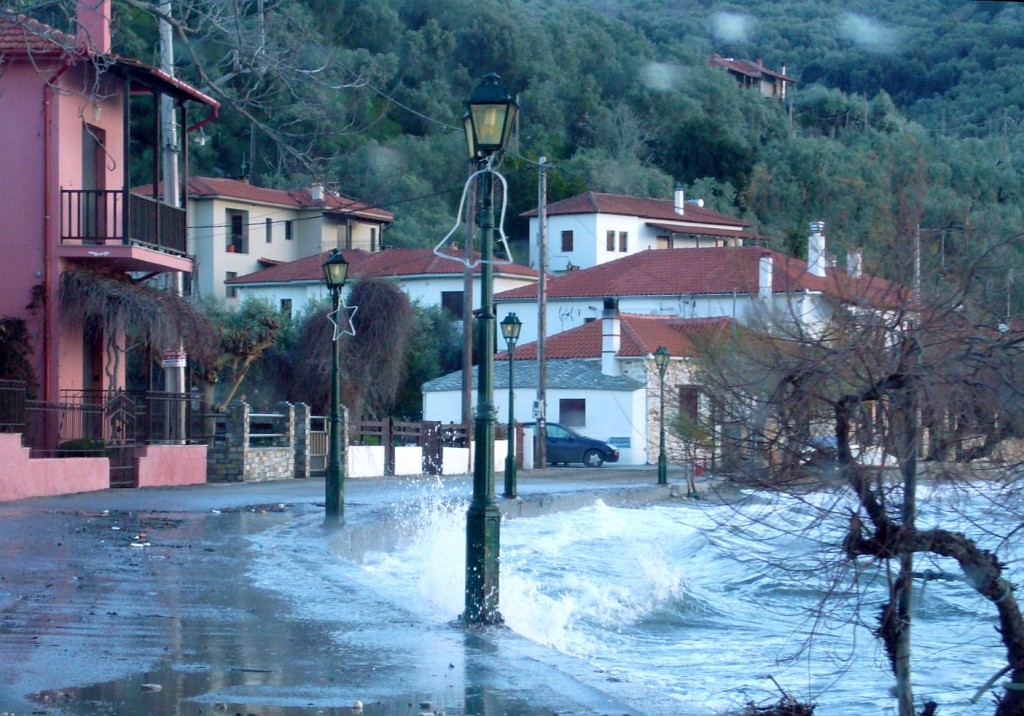 The south wind, that most unwelcome bearer of Sahara dust, has been blowing wildly most of the week, yielding occasionally to the rages of the competitive west wind. So choking has the dust been that the elderly and those suffering from breathing complaints have been strongly advised to remain indoors.

Newspapers the world over run banner headlines to the effect that the weather is nuts, has gone mad, is weird, strange, odd, ominous. To hear some tell it, the end of the world is upon us. So must the Ancients have believed when Aeolus, heeding the command of the gods, opened his bag of tricks and let loose the four winds.

Who has angered the gods this time? No idea, but someone up there on Mt. Olympus was certainly livid enough earlier this week to demand that Aeolus really let rip. Unpleasant as the south wind is, it’s no match for the west wind in full throttle. All through the long Monday night it ranted and roared, pounded the coast, sent shutters shuddering, surely terrorized many creatures, and kept us awake. Nor was Aeolus instructed to bag his west wind again come morning, with the result that it grumbled along, squabbling with the south wind until late yesterday. 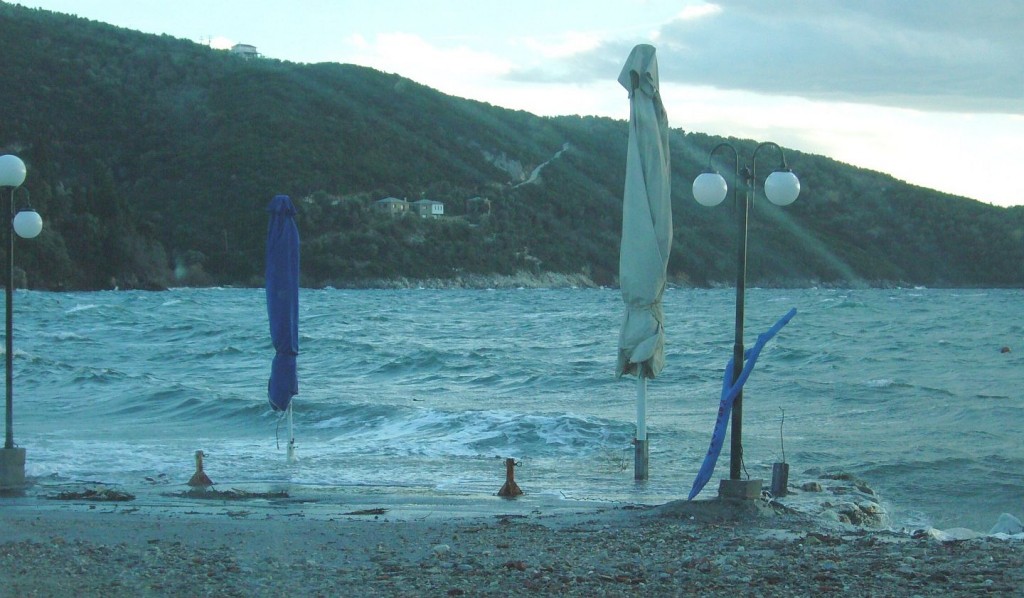 Wind is hardly uncommon here on the Pelion Peninsula where the many islands and inlets of the Pagasitic Gulf, together with the hilly and mountainous terrain, interact to influence the weather patterns. The Pag is beloved by sailors, its merry breezes with their sudden shifts in intensity and direction providing challenges to amateur and pro alike.

The locals have a delightful vocabulary of expressions to describe the effects of what Aeolus is offering: kapelato, kareklato, trapezato being among my favourites. Kapelo is a hat, karekla is a chair, trapezi a table. Well, what he unleashed on Monday night had no difficulty lifting tables, none at all, as was soon obvious to us in the morning when we set off for Volos. We took the coastal road which is practically deserted at this time of year and shortens the trip by a good 15 minutes. West wind’s temper tantrum had littered the beaches with debris. Branches, rocks, stones are objects of nature, 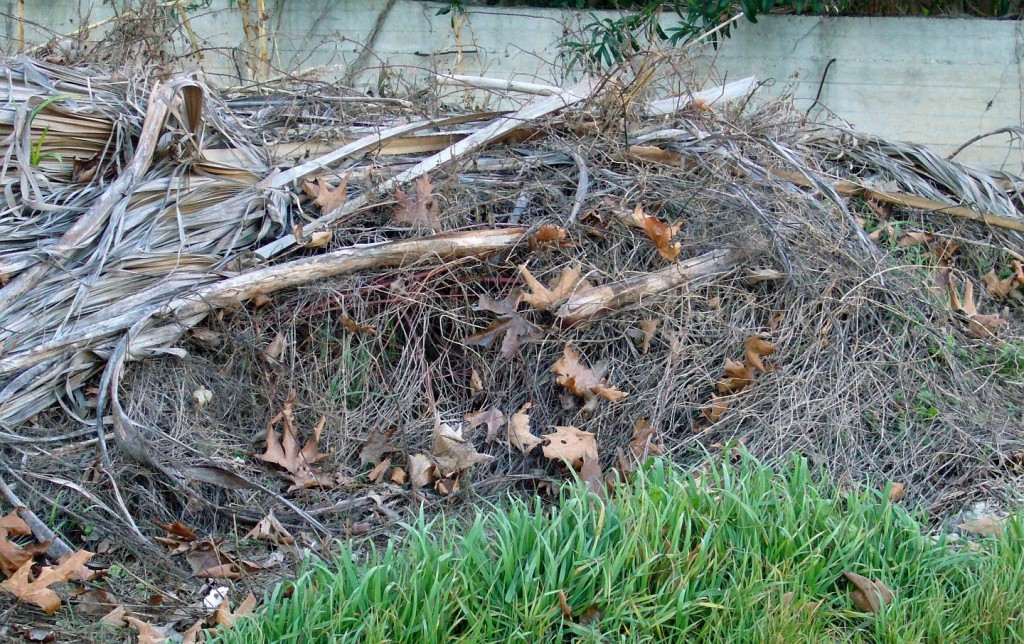 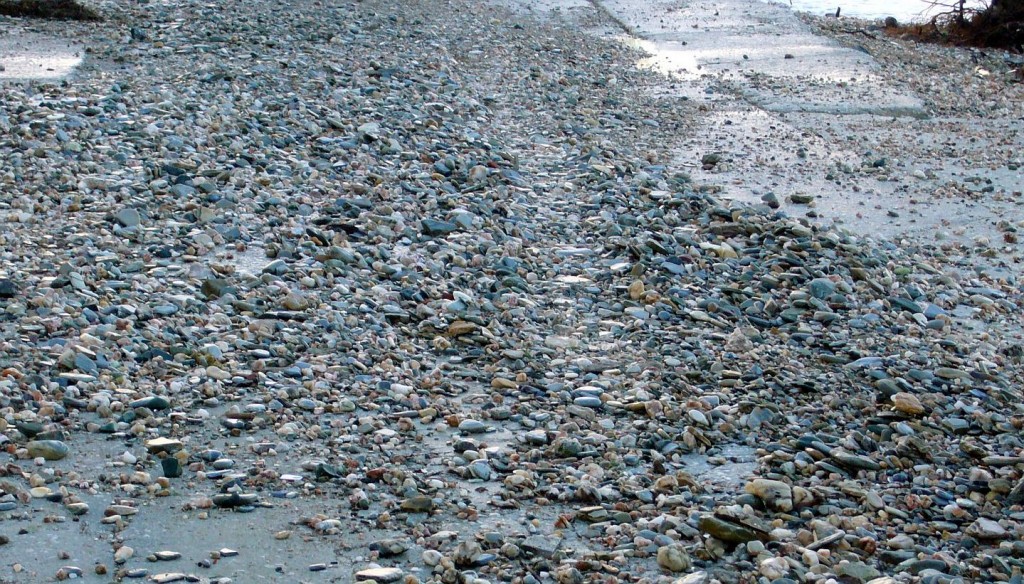 but the heaps of plastic and other examples of man-made items hurled up by the sea are an eyesore, though in fairness some had clearly been dislodged by force of wind and wave. 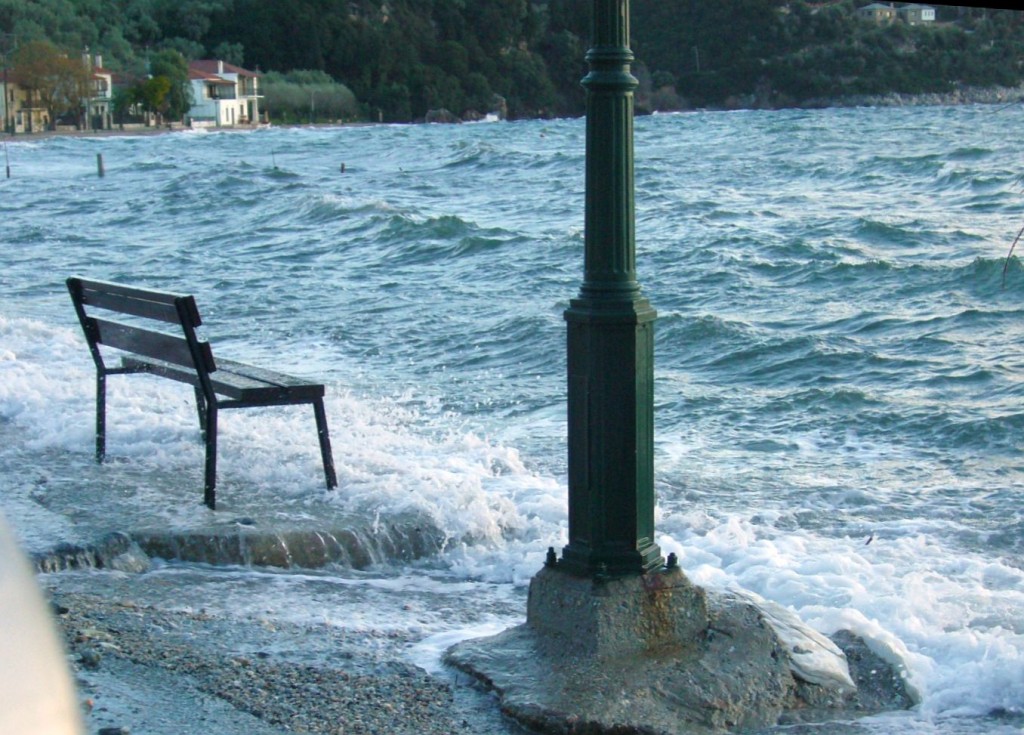 Parts of the road had sheared off in the violence, making the narrow road more challenging still, 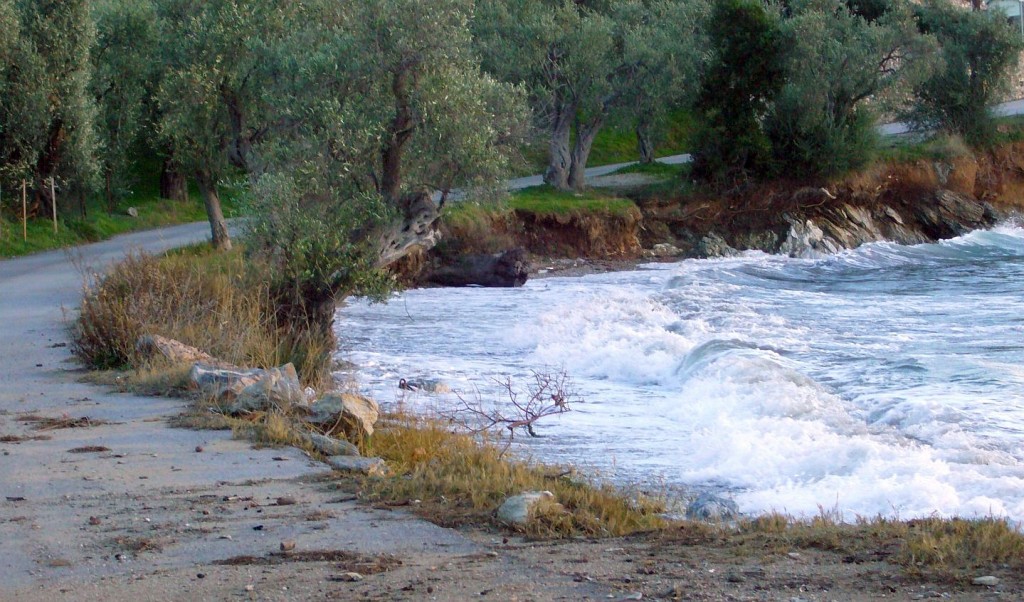 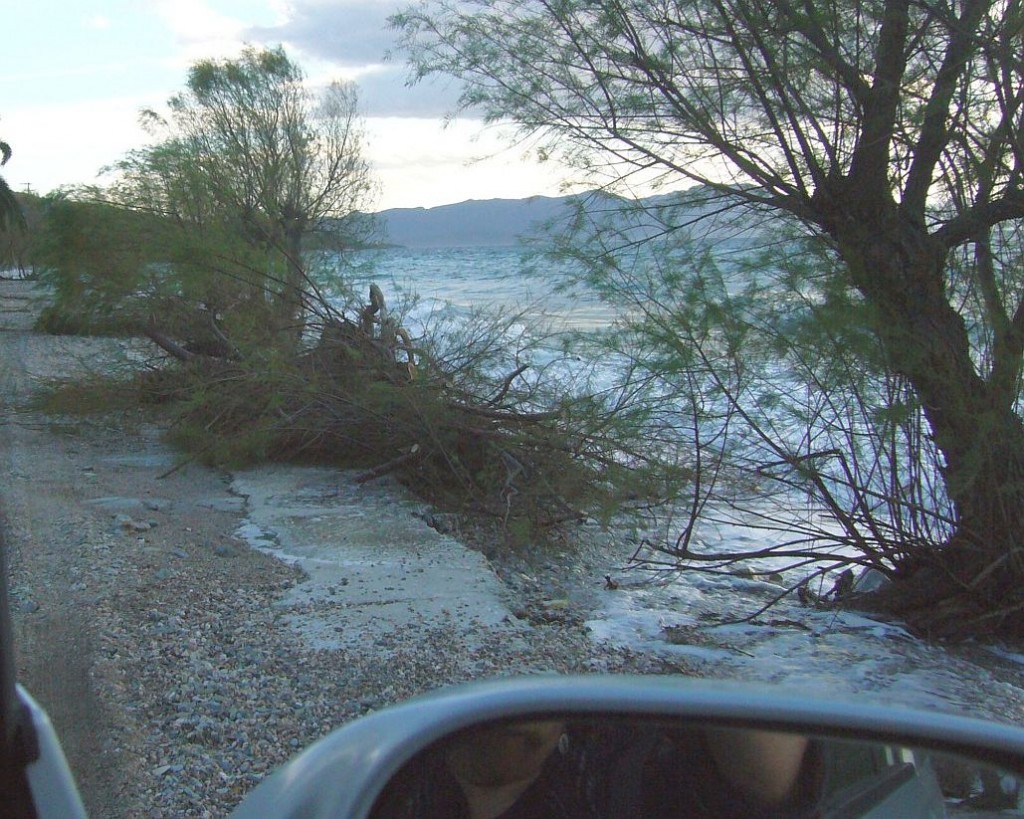 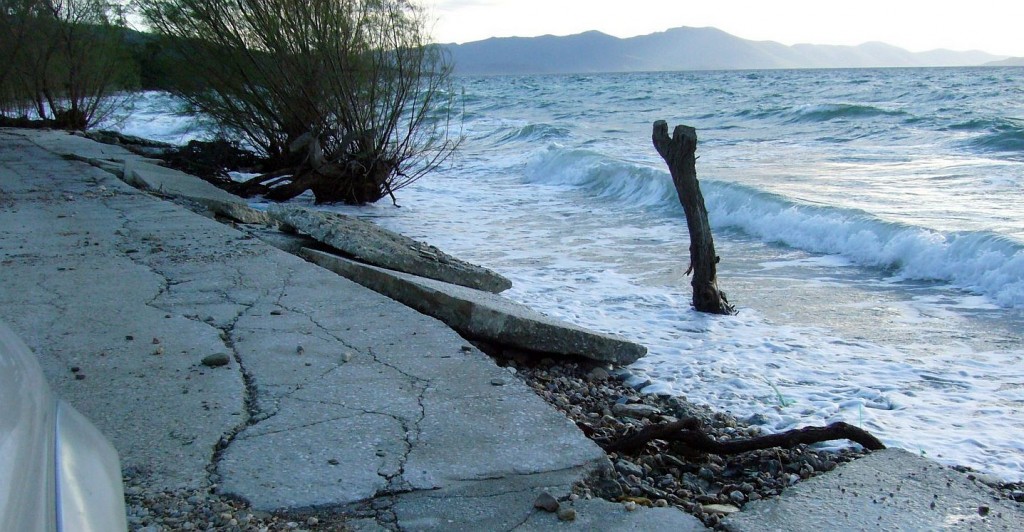 but what brought us to a complete standstill was the large tamarisk tree, torn from its position between the beach and the road, blocking any further passage. 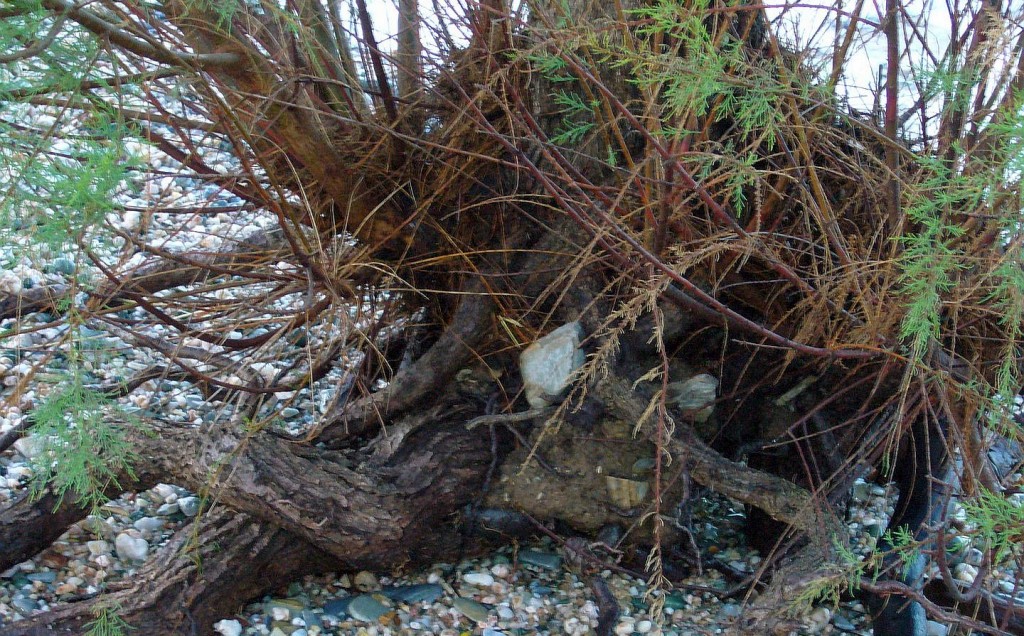 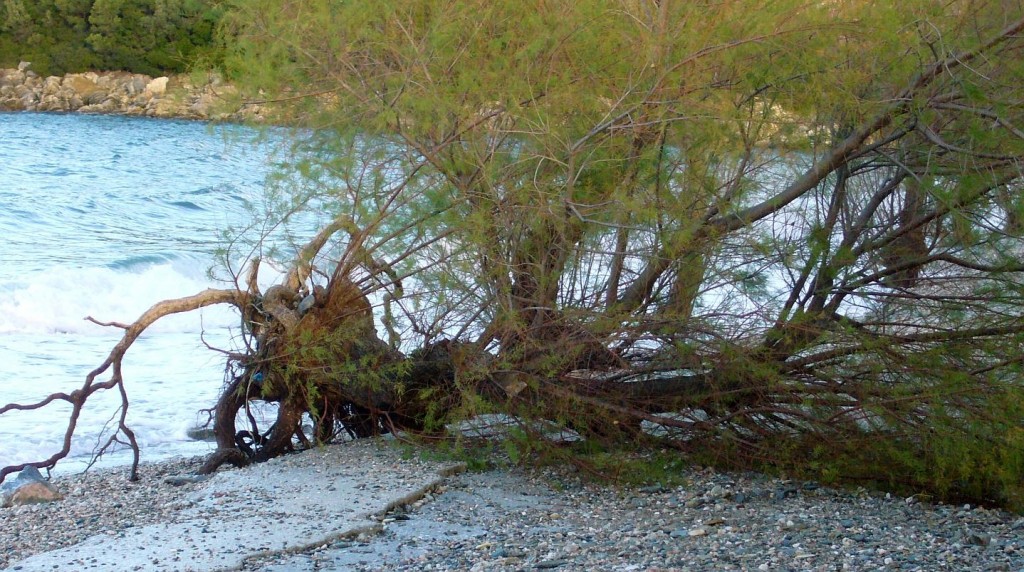 Hubby was unfazed, stopping the car to get out and survey the situation.
I carried on knitting. 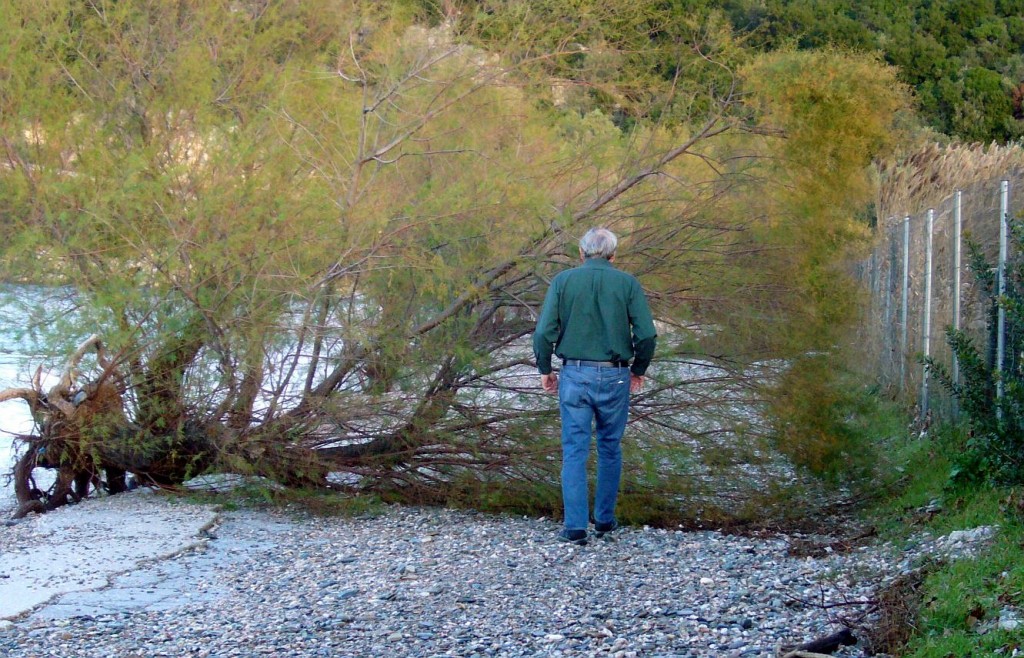 “We left with plenty of time to spare,” he reassured me as he returned to the car.  “I’ve a handsaw in the back – soon take care of this.”

I continued knitting; he appeared to be rummaging about longer than I’d expected. 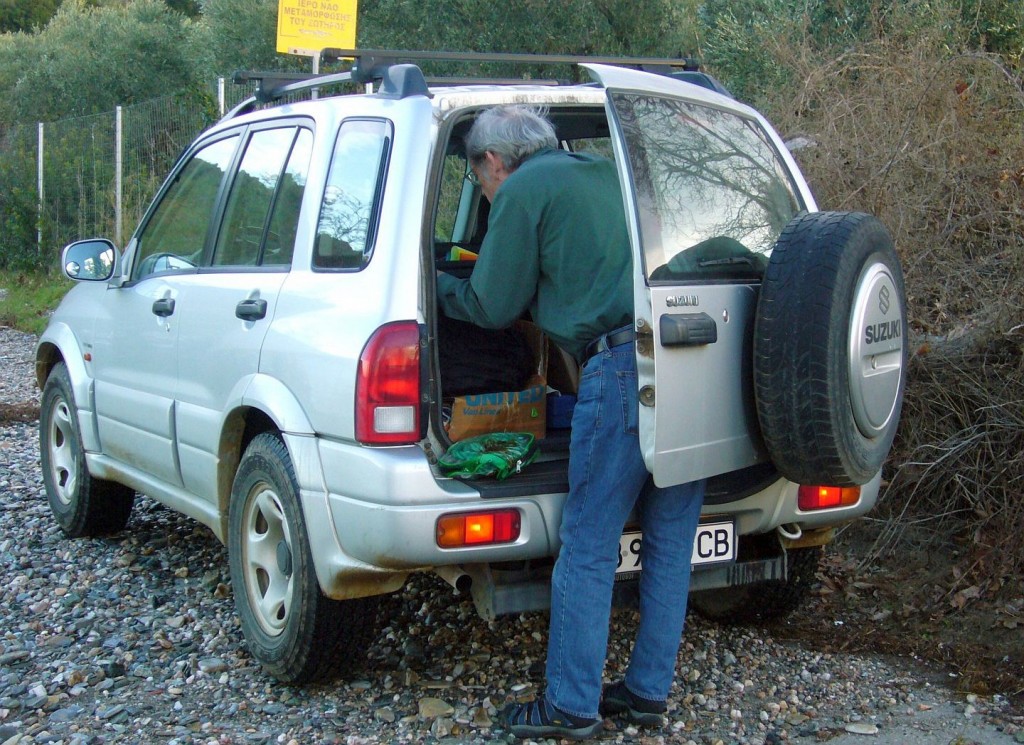 “Rats!” he announced (or something similar). “I must’ve forgotten to get it back when I lent it to Costa.”

Well, that put a spanner rather than a saw into the works. I abandoned the knitting in favour of documenting the incident for posterity.

Ron moved on to plan B.
“I’ll use the tow rope to pull it out of the way,” he said, uncoiling it from the collection of hydraulic jacks, oil, jumper cables, tire pump, and sundry other items apparently essential to our survival when traversing the Balkans. (I might mention here that my emergency supplies typically run to plenty of knitting and chocolate.)
“It won’t take long.”

He worked at securing the cable to the tamarisk and then to the car’s bumper, yelling at me to get well out of the way as he climbed back in to start the car. 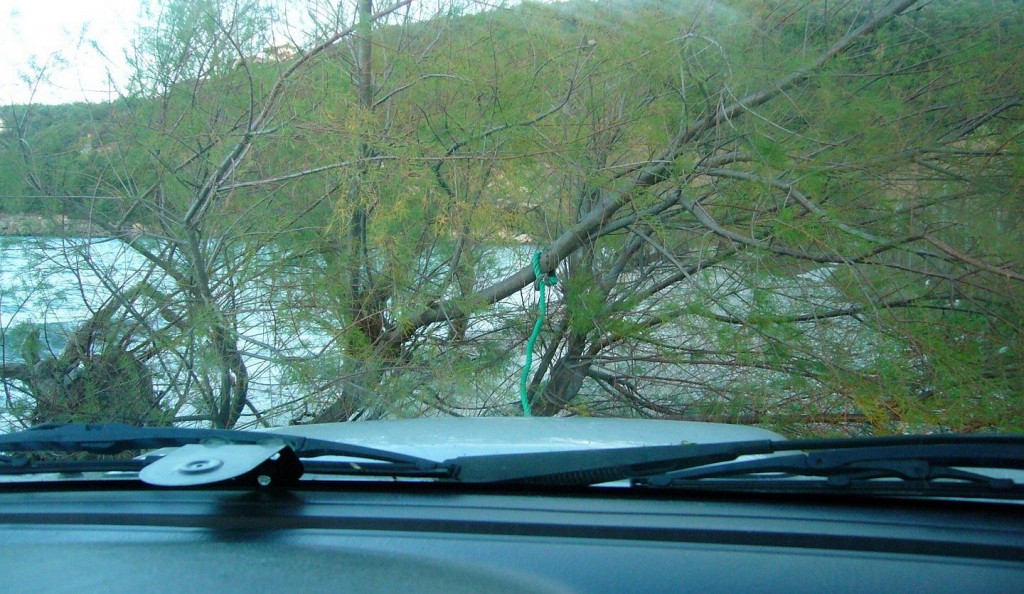 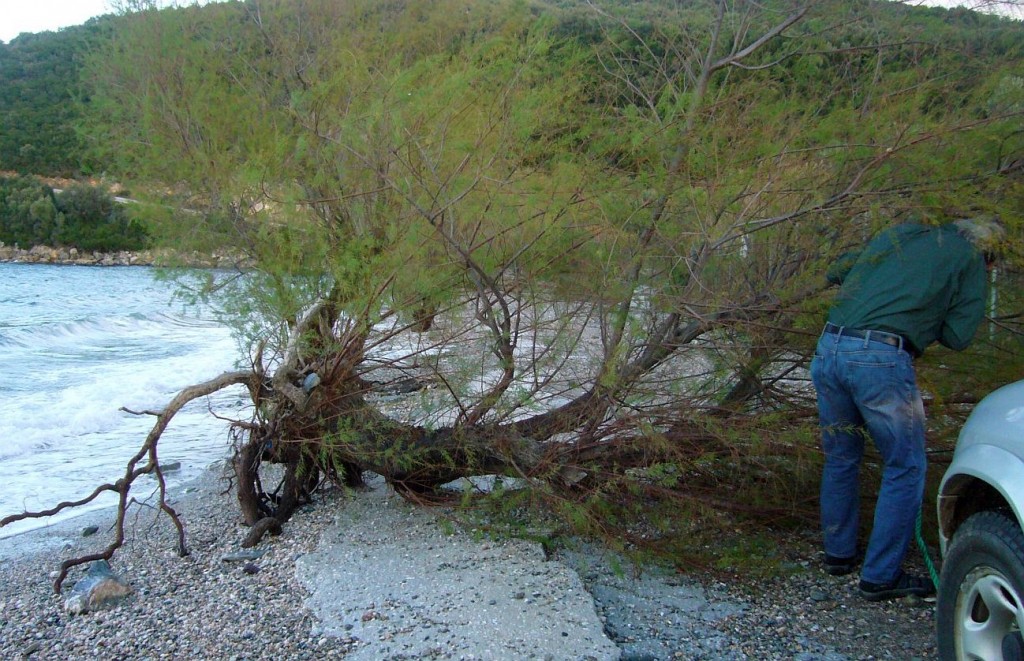 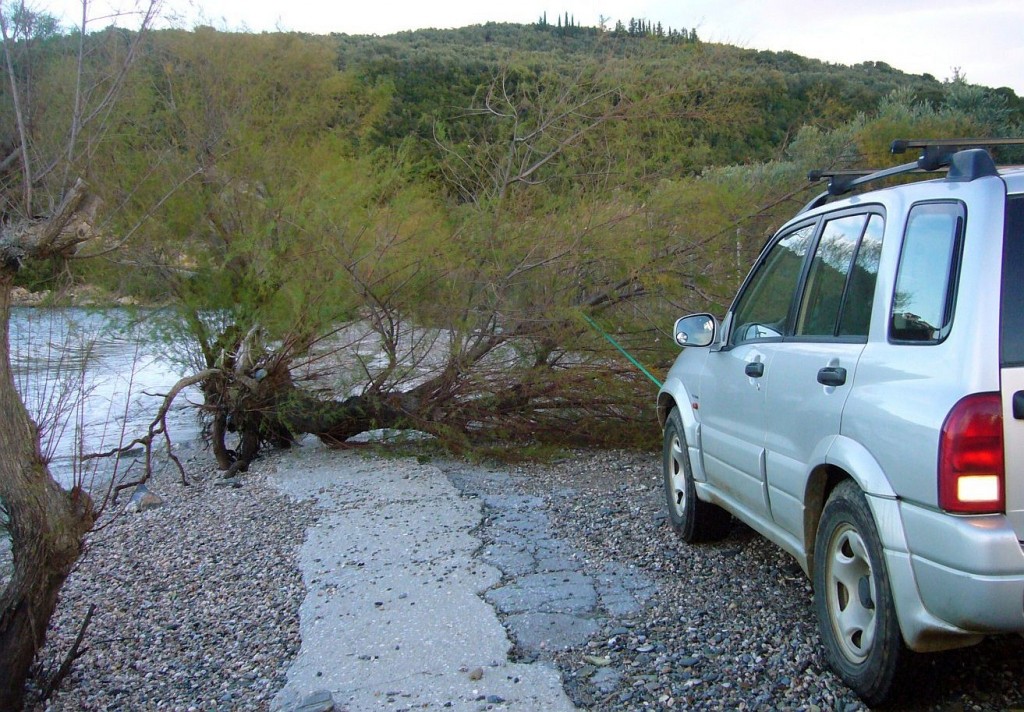 Waves crashed, spray spat, tires screeched, stones crunched but the tree budged nary an inch. Again he tried. Again the collection of sounds filled the air. Again the tree resisted. 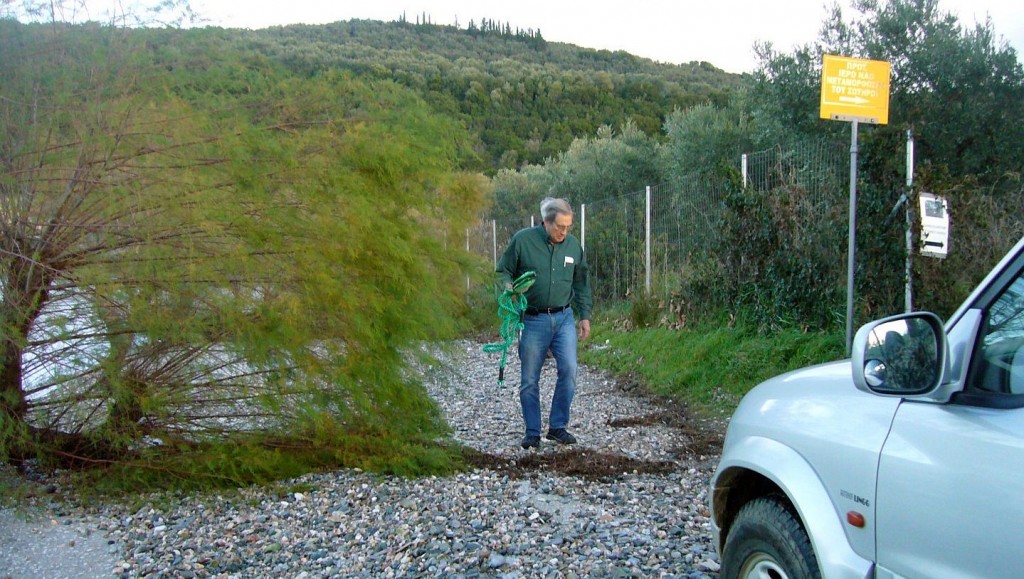 Ron climbed back out to retrieve the cable, I climbed back in. There was no option but to retrace our journey and take the upper road. Now considerably delayed we were grateful for the cell ‘phone though it was some time before we could get a signal and let it be known we were running late.

We stopped at the first inhabited property to advise of the obstruction which would need a chainsaw to clear away completely. 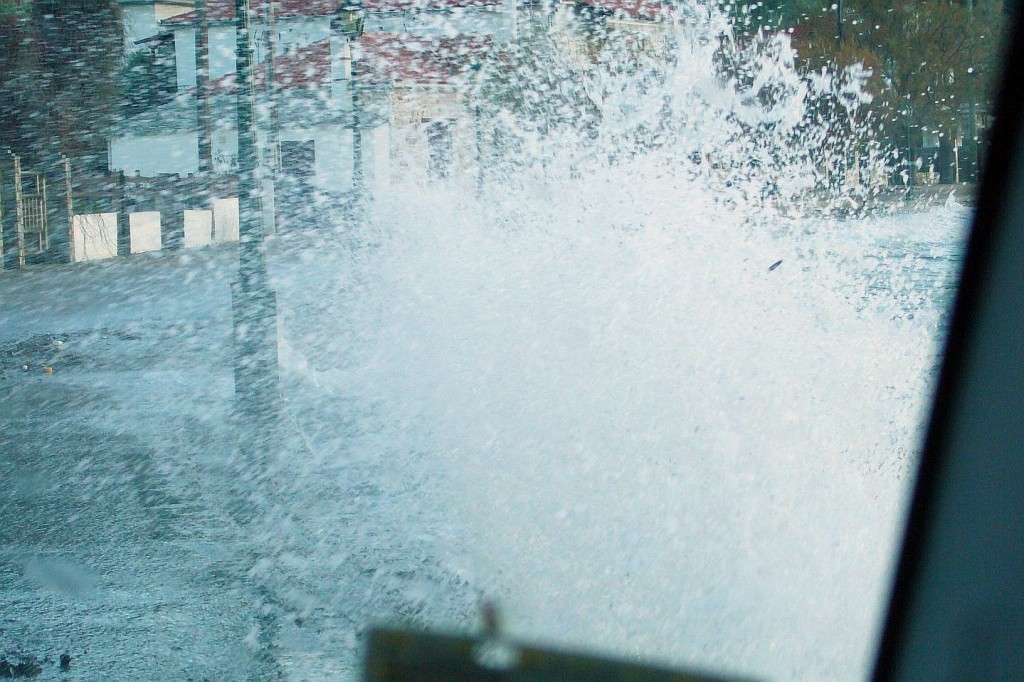 Missions in Volos accomplished – which included hubby purchasing a handsaw – we returned via the coastal road. The tamarisk had meanwhile been chopped up and stacked at the side of the road by some public-spirited soul; Ron had missed his chance.