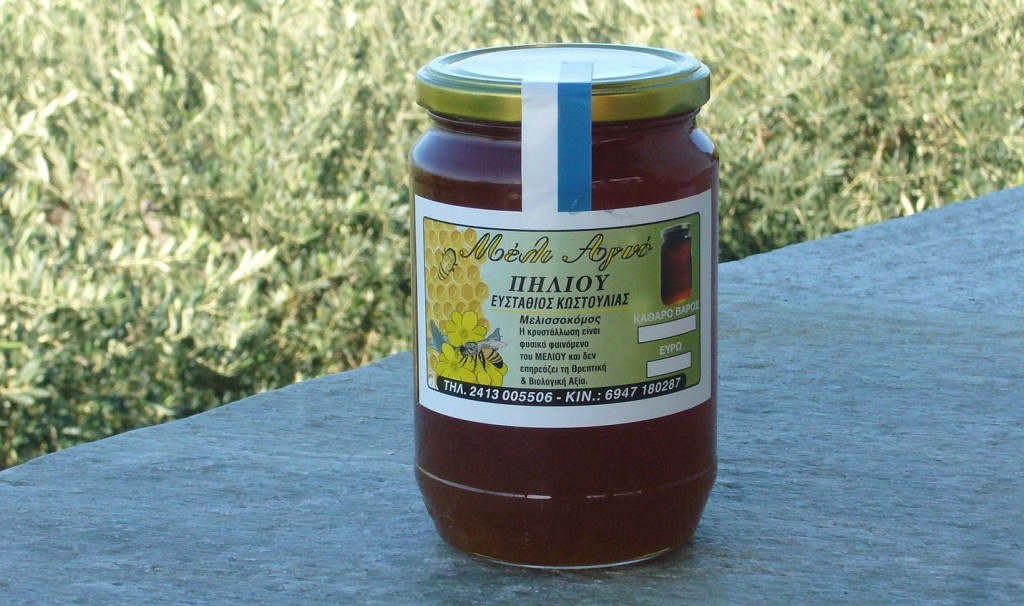 Strangely warm weather continues, and although it’s very pleasant indeed it can only be a matter of time before the inevitable change occurs, unleashing nature’s pent-up fury. Hubby made his way to the upper village this morning to run errands, but I chose to stay home, wandering around the garden that will all too soon be storm-lashed and dejected. 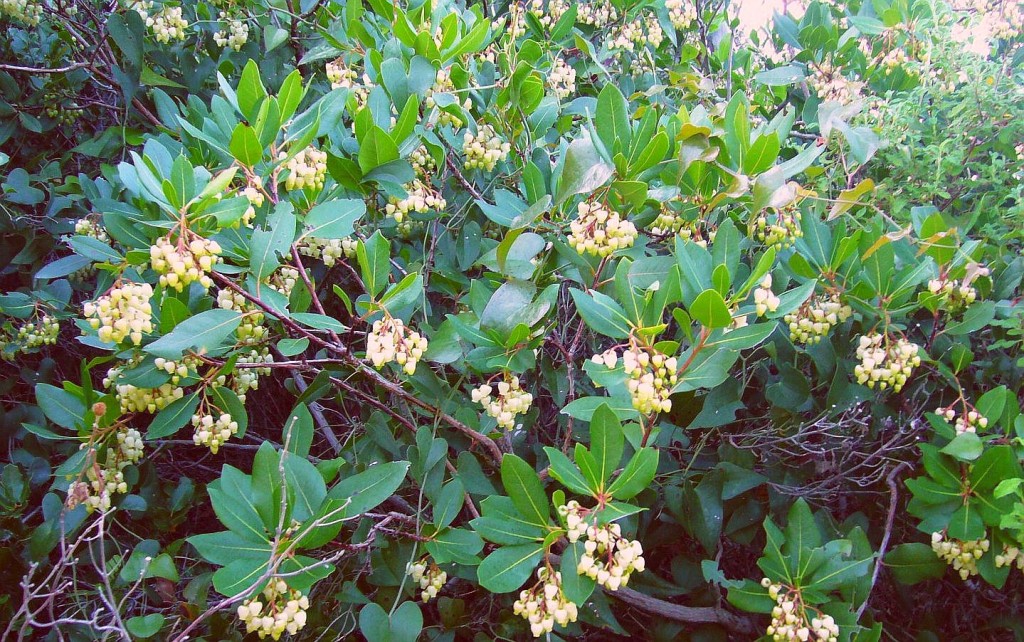 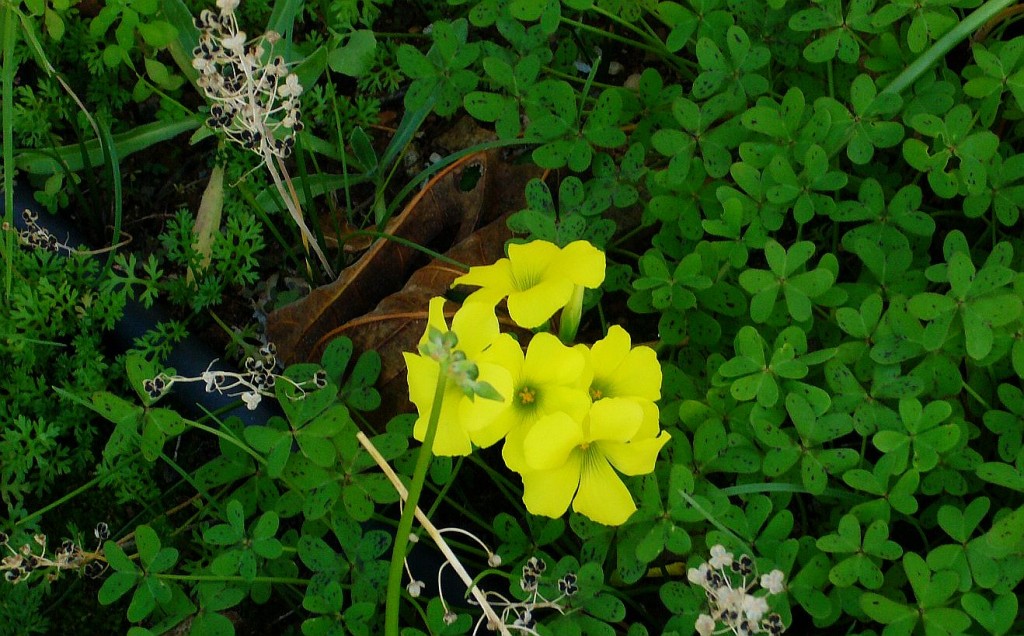 The humming and the thrumming of bees – these are wild and not belonging to any beekeeper – competed with the raucous screeching of the gulls overhead in a frenzied buzz. Do bees sense that this is an exceptional time? Are they somehow aware of this extended period in which to gather food? By now there’d usually be at least some snow on the mountain, while the bees would be hunkered down in their hives, deep in the forest. 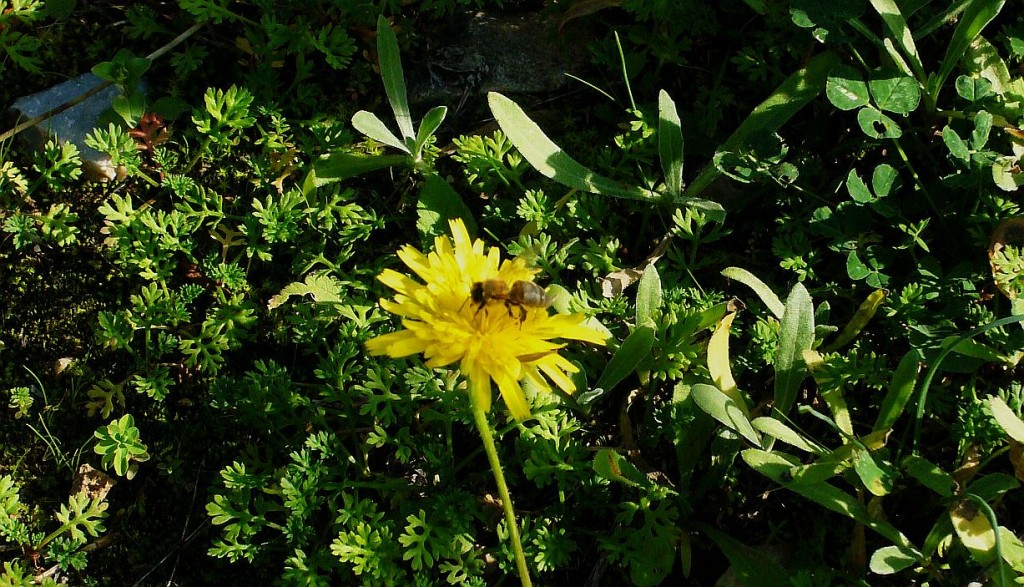 My thoughts turned to honey. Honey was long known to the ancients, who greatly appreciated it, singing its praises in story and verse. The Pelion region produces honey which can only be described in that overused phrase: fit for the gods. We have never tasted anything like it anywhere. Ever.

The beekeepers can be seen through the warm months, as busy as their bees, moving the wooden hives about the countryside, up the mountain, near to ancient springs, deep into valleys and fields dense with native plants. It’s the variety of pollen the bees feed on from the hundreds of different wild flowers, the heathers, the fruit trees, that give the honey its unique taste and texture. Infused with a myriad of flavours, the golden liquid is so thick you can scarcely pour it. 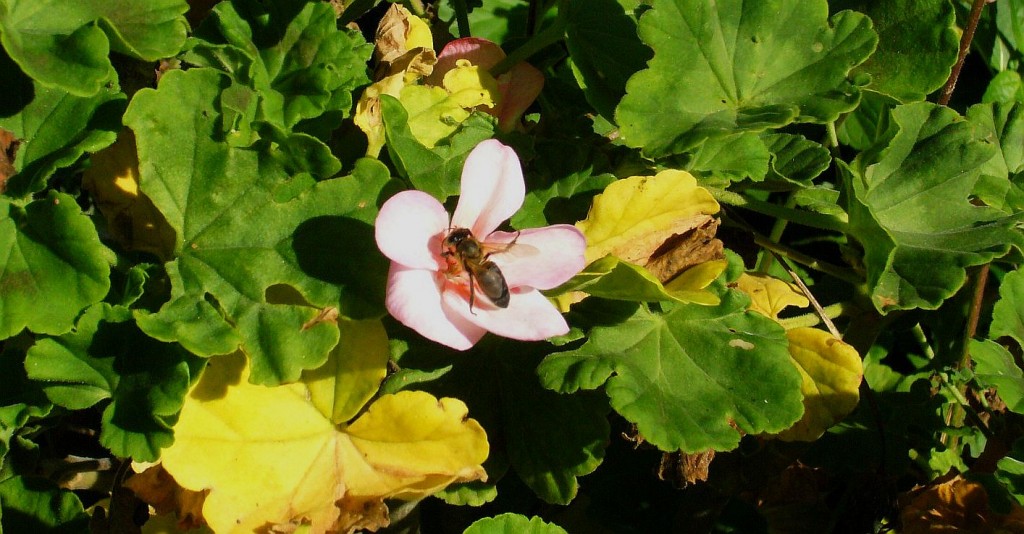 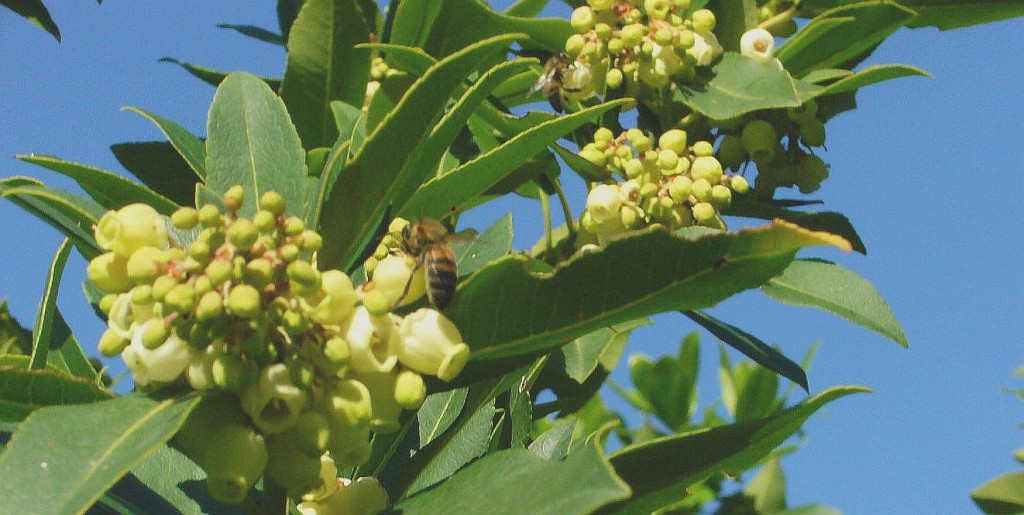 My various furry companions heard the returning car before I did, darting off to welcome Ron home and check on what might be forthcoming.

He too had been busy. “Look, I got quite a few jars of honey from Stathis to see us through the winter.” Serious winter’s still a way off (I hope) and I’m not sure that much of Stathis’s delicious honey will last that long. He’d also brought bread, still warm from the bakery, thick with grains and seeds. Now that’s definitely not going to last! 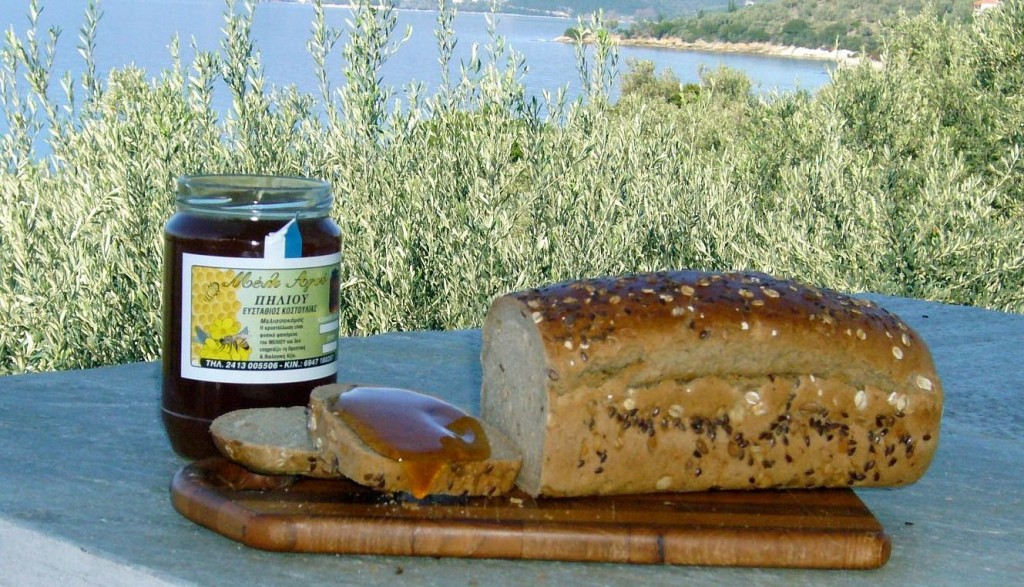 And yes, the glorious weather is also about to end – the forecast is for a significant change to sweep in overnight. Wind and rain, thunder and lightning – all the weather gods will be doing their bit in this performance. Our bees will be glad of the food stocks they’ve so carefully stored in their hives. 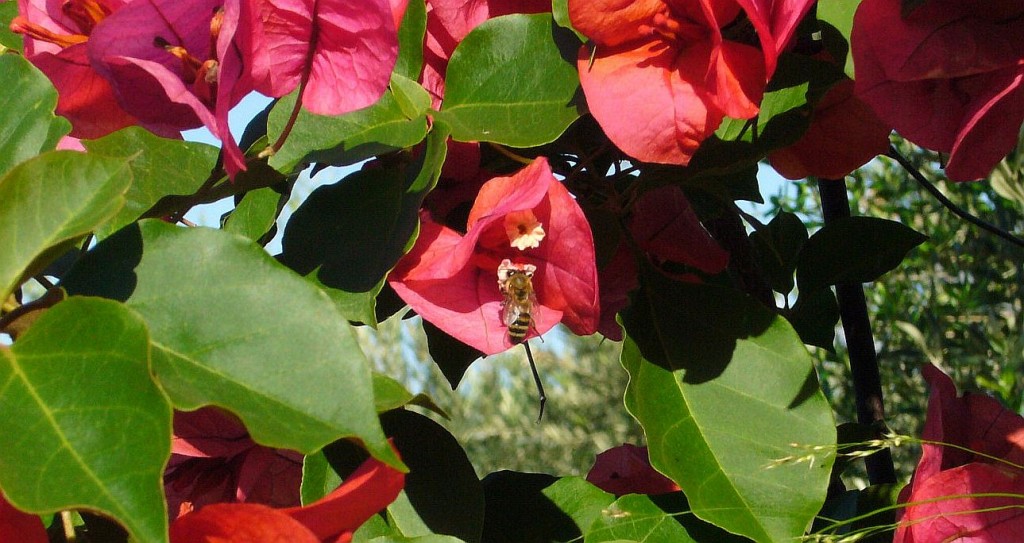 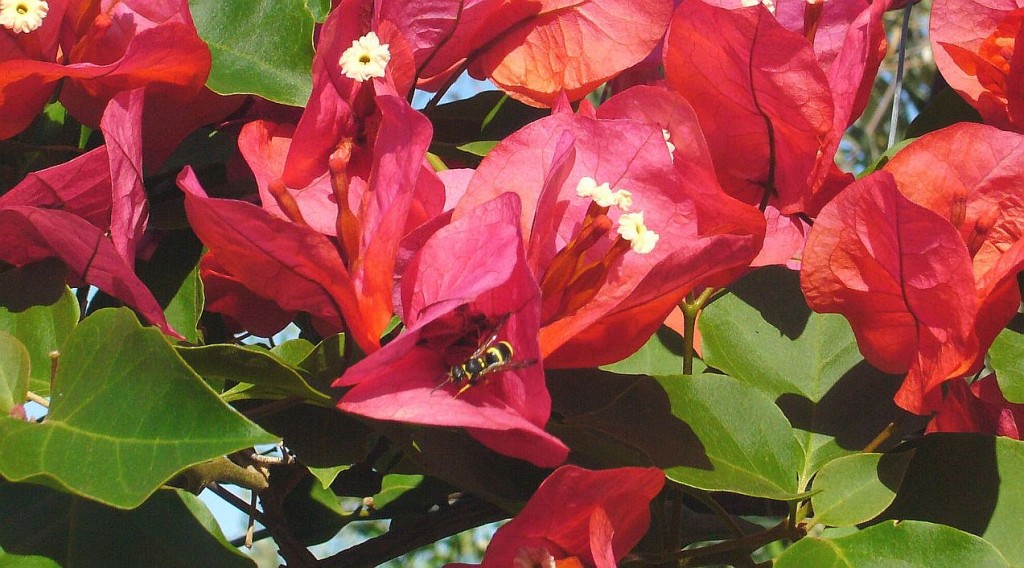 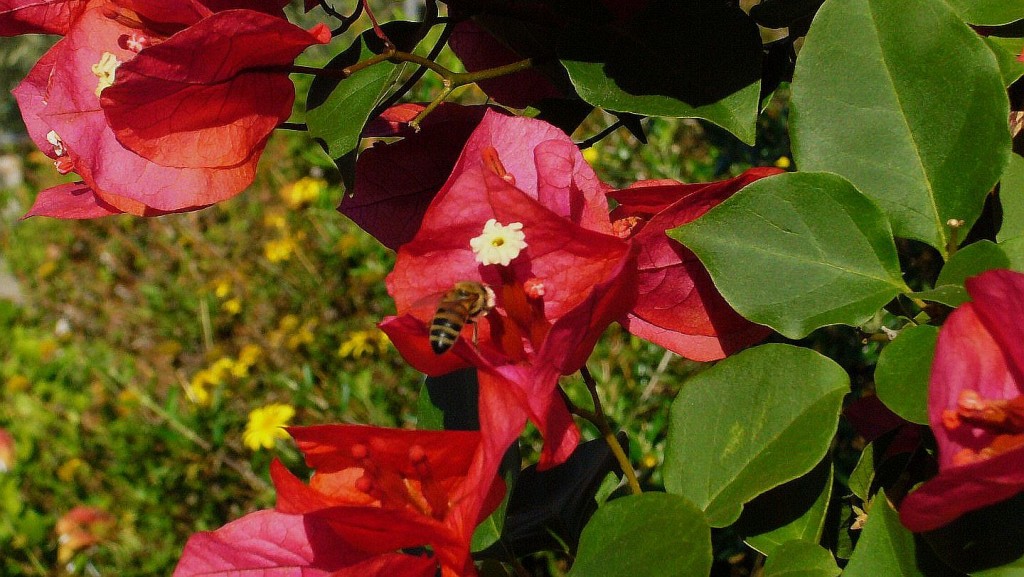 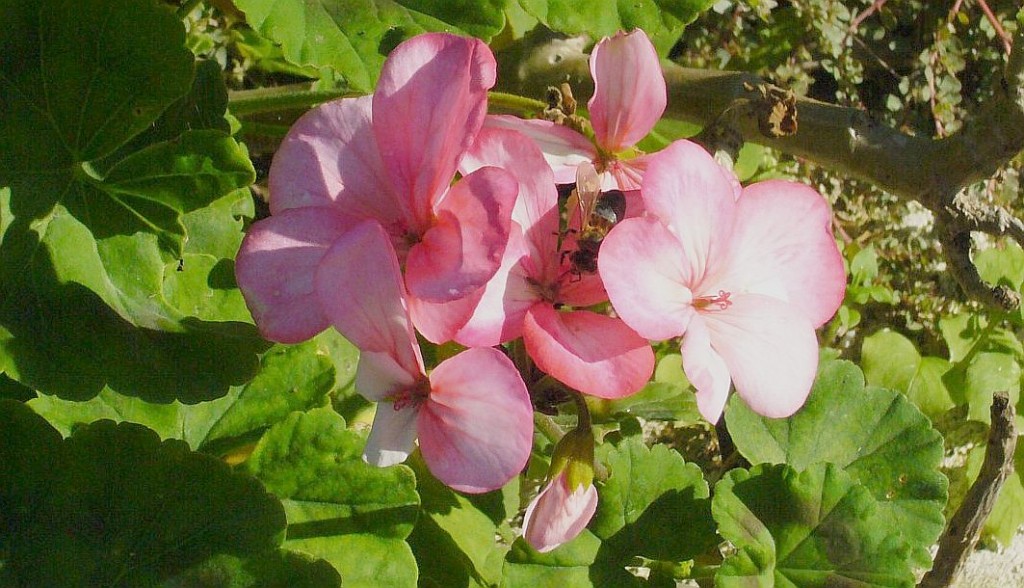 Yesterday a very dear friend gently asked if I’d abandoned this blog; I’m startled to see that it has been quite seriously neglected. The summer was busy, stuff intervened, and here we are, headed into a winter which has generated much discussion as to what we might expect of the weather.

The summer was exceptionally hot, with record-breaking temperatures and barely a drop of rain. The heat continued well into autumn, and it’s still unusually warm. A prolonged period of heavy rain coincided with the turning back of the clocks, resulting in darkly gray, sunless days which rather discombobulated most folk, accompanied as the drabness was by a temporary drop in temperature.

Talk of severe winter peppered every conversation, with many of the older folk making pronouncements: “When you have seen as many winters as I, you know it will be a heavy/light one this year.” Such statements might be countered with: “Ah, but you forget the winter of 19-whatever when we had floods / bizzards / a mini ice-age / tropical heat / tornadoes…” The speaker would be accompanied by much nodding or shaking of heads, spirited talk of past weather related events breaking out among the participants, while the occasional modern philosopher might quietly remark: “The weather will be what it will be.”

Who can truly predict the weather? Maybe the shepherds know something I don’t because driving into Volos yesterday we encountered several flocks being moved, though whether to fresh pasture or to their winter pens I couldn’t tell. 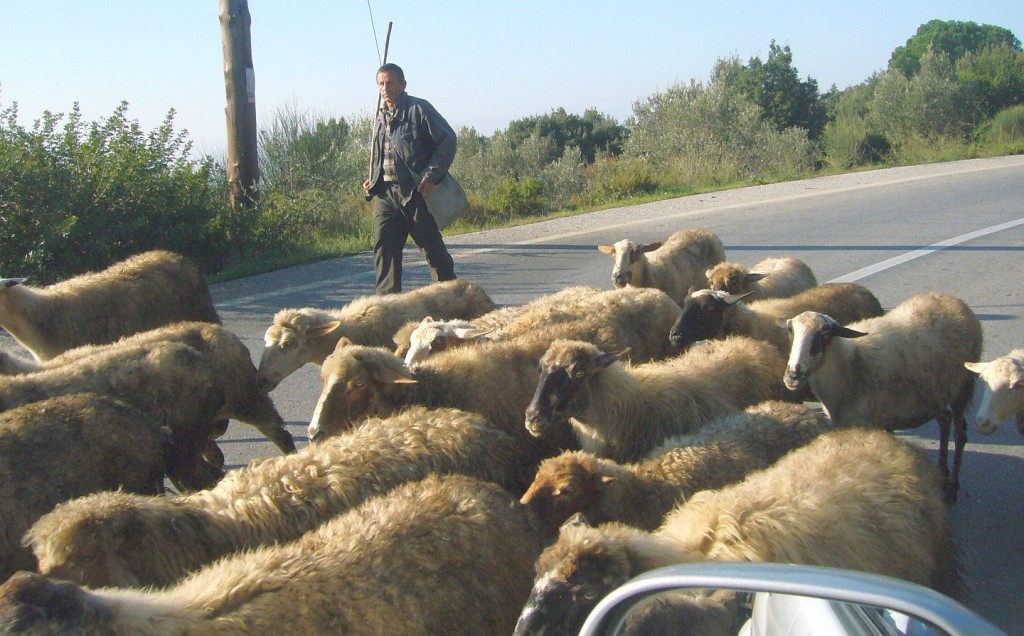 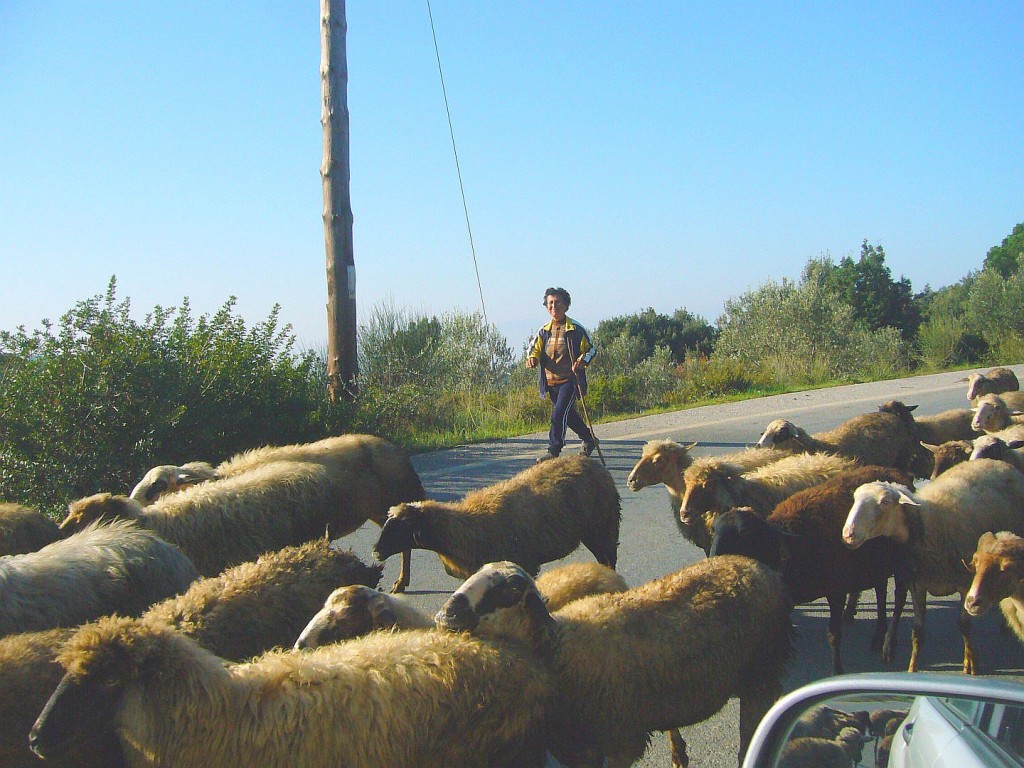 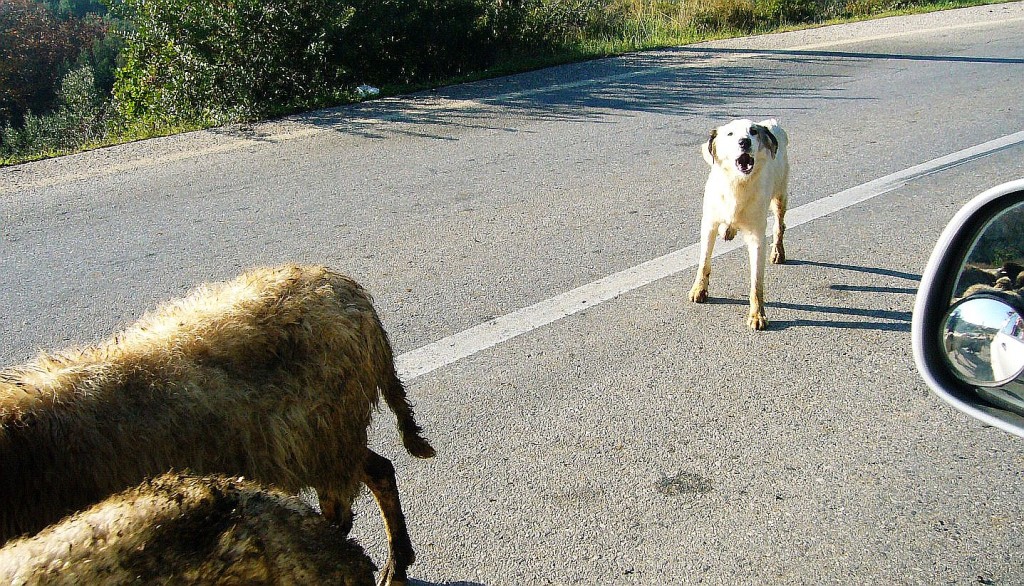 On our way back from Volos we stopped to get gas, whereupon I spotted a shepherd urging his sheep along a nearby side road into an olive grove. The garage owner who knows me and my passion, for I’m always knitting in the car or while waiting for our olives to be pressed at his busy modern mill, was amused at my interest in the sheep.

Very kindly, he instructed his young Albanian helper, Panos, to take me to the action. We crossed the busy road, stumbling on through the fields with me clutching my camera, while Panos kept grabbing me lest I trip. The shepherd gazed in bemusement as Panos explained to his compatriot that I’d like to take photographs. The sheep clearly had no problem with this plan for the interruption enabled them to feast on the luscious fresh growth of weeds which has sprung up after the rains. 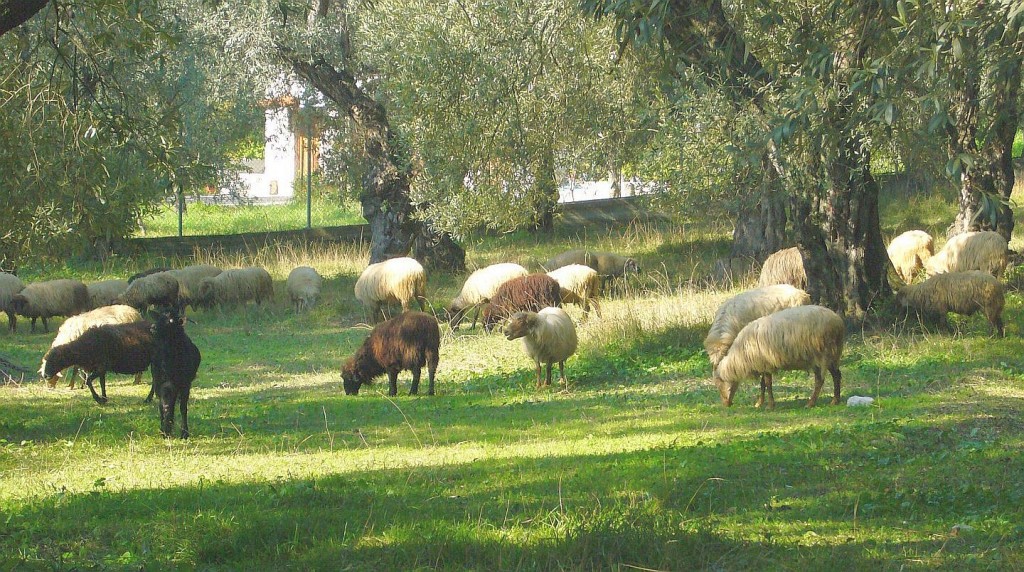 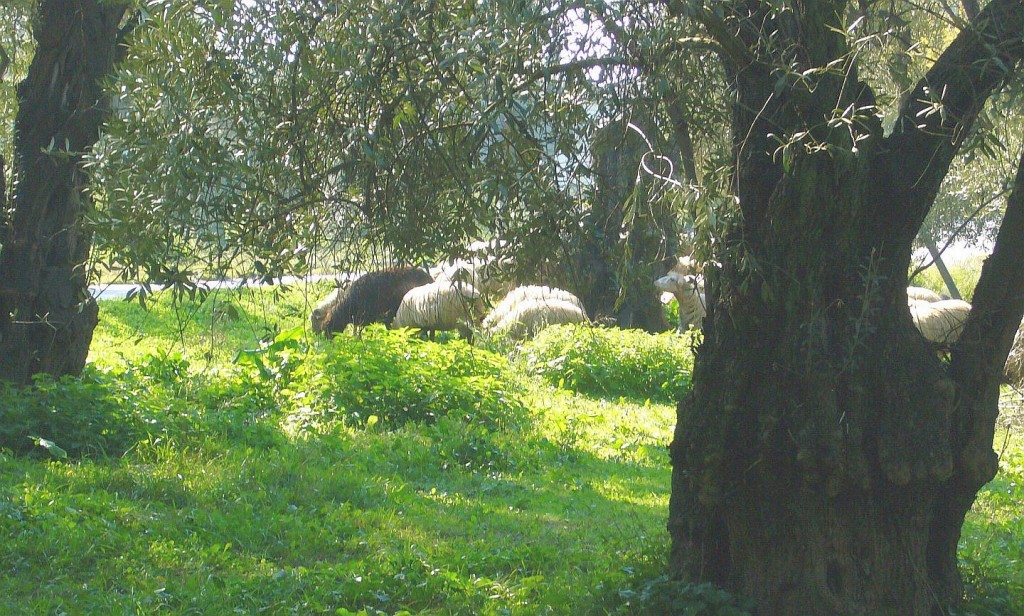 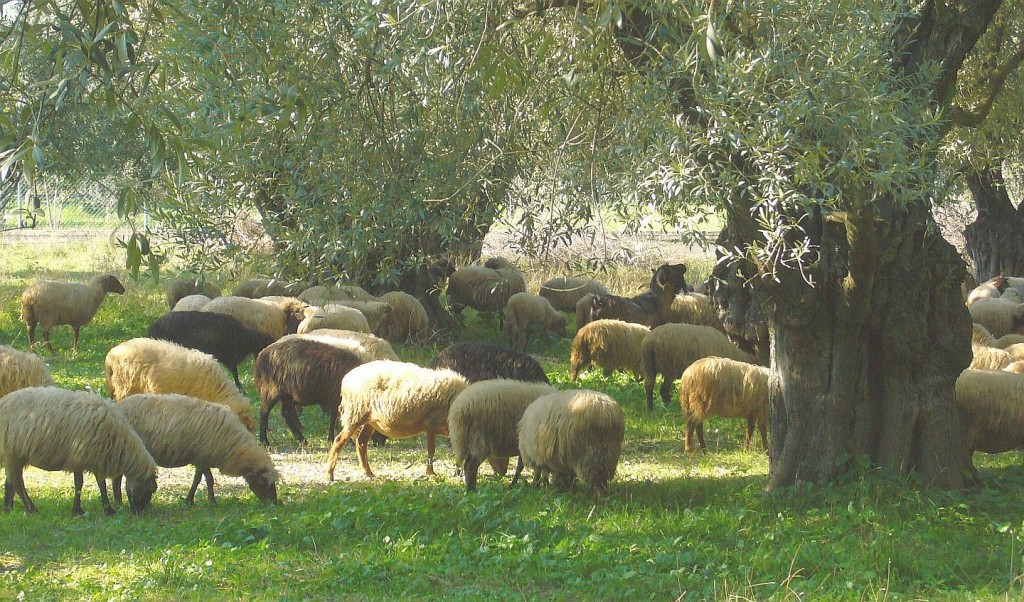 Panos speaks excellent Greek, the shepherd is less fluent, and both have a smattering of English obtained from that ubiquitous teacher, the television. My Albanian consists of two and a half words interspersed with a lot of gesticulation, the universal language in these situations.

We had a lively conversation. The shepherd raises sheep for their wool which he sells in Albania where it’s handspun and woven on ancient looms into blankets. I’ve handled some of these. Coarse and very heavy, they certainly don’t approach a product even remotely luxurious, but they’re warm, hard wearing and much needed in the harsh Albanian winter.

We spoke of knitting – a craft with which both men are very familiar, speaking fondly of the work produced by their grandmothers. Panos told the shepherd that I knit “round and round and round”, which rather fascinates him, accustomed as he is to socks being knitted on 5 needles, but garments being worked flat, back and forth.

He also, sweet lad that he is, said that I’m very young to be knitting! I imagine that knitting falls to the older womenfolk in their remote villages for the younger ones will be busy with farm chores and child-rearing. Perhaps I should knit each man a soft, warm winter cap. Panos’s grandma might be surprised to examine a seamless hat.

After another 40 minutes of driving, we turned off the main road and began working our way down the track to our house. Evgenia was rounding up her flock in fields overlooking the Pagasitic Gulf, as the shadows lengthened and the placid turquoise sea turned, in Homer’s words “wine dark.” We stopped for a quick chat as we haven’t seen her for some weeks.

She’s a lovely soul, always cheerful and rather child-like, very fond of ice cream which we often bring her in the summer, but she was distressed. One of her gorgeous Greek sheepdogs is missing, and she fears he may have been poisoned. We offered sympathy, tried to jolly her up a bit, and urged her not to delay returning the sheep to their pen where they would be milked. Apollo was moving his chariot rapidly across the sky, taking the sun away from us, urging us all to go home. 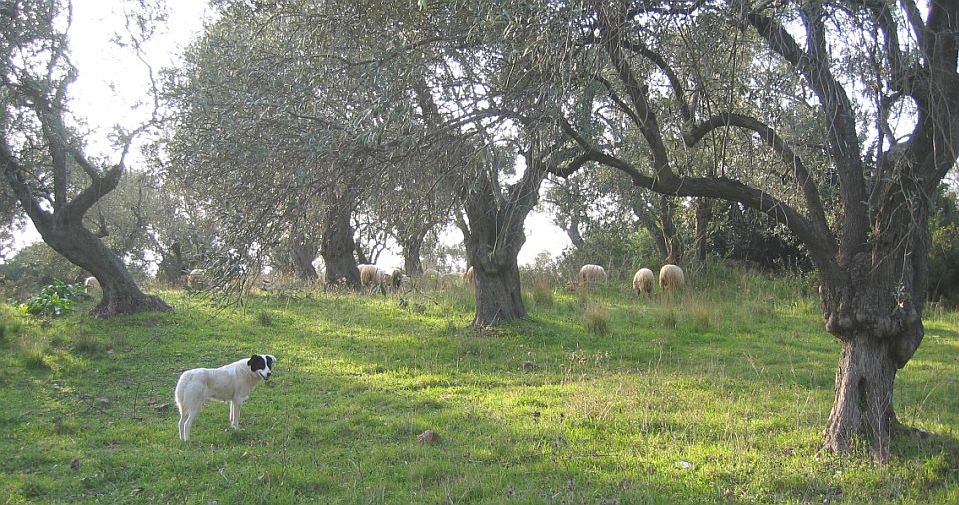 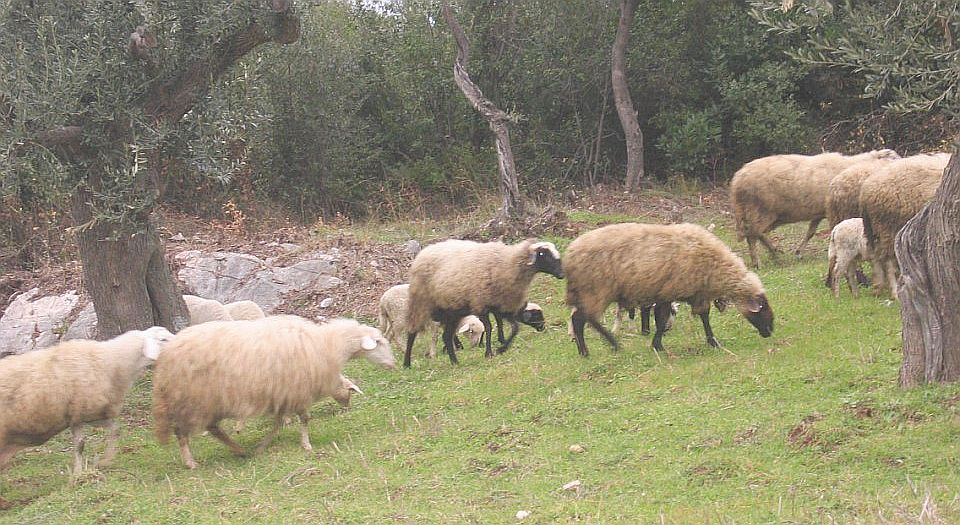