COMMUNICATION: a process by which information is exchanged between individuals through a common system of symbols, signs, or behavior 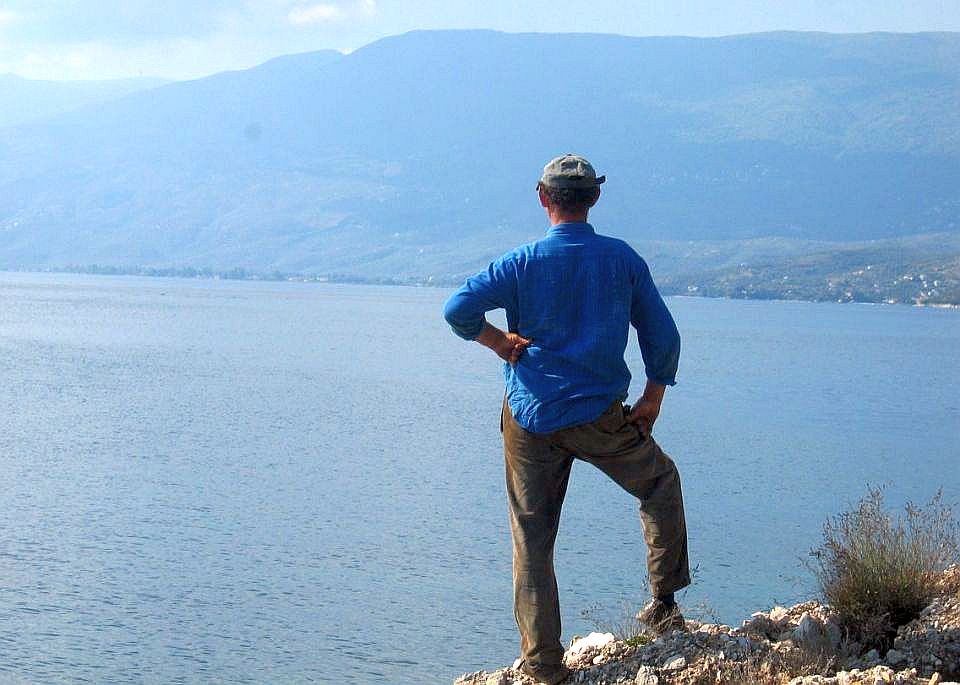 As previously mentioned Costa and I do a lot of talking in various combos of Greek and Albanian. He speaks a fair Greek considering he learnt as an adult when he came here from Albania in search of work.

Kids usually learn a new language so much more quickly than adults do, but it’s amazing how much can be communicated by just a few words, and the universal language of hands. Pointing, waving, gesturing help quite a bit to get a point across. 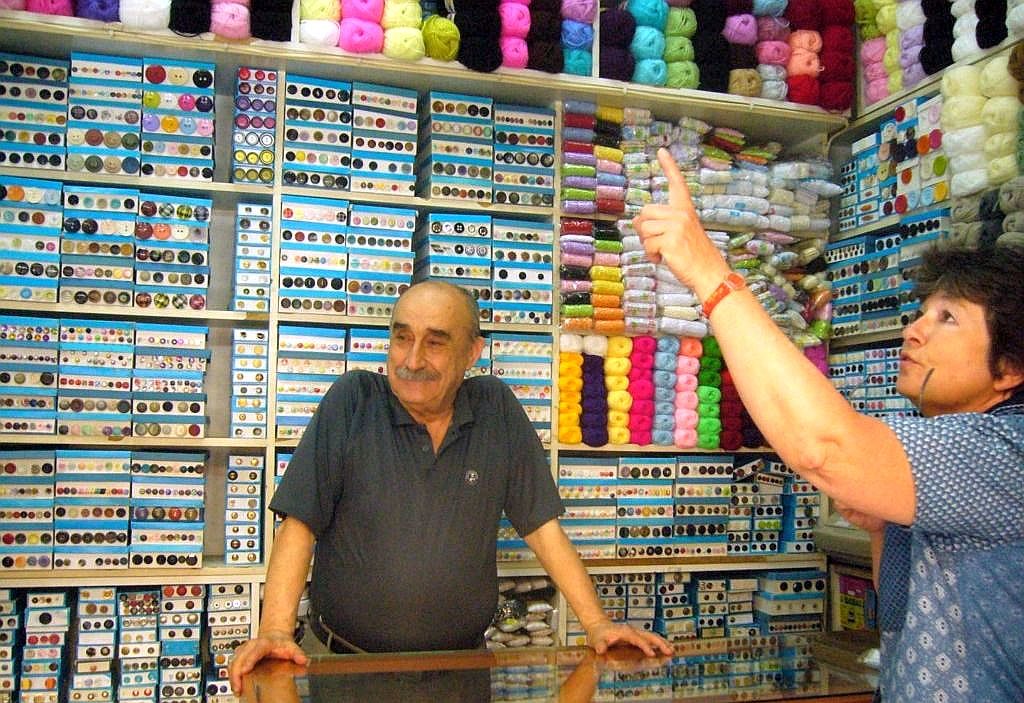 “So,” says Costa, “I cut down your oleanders. That’s upset you?” 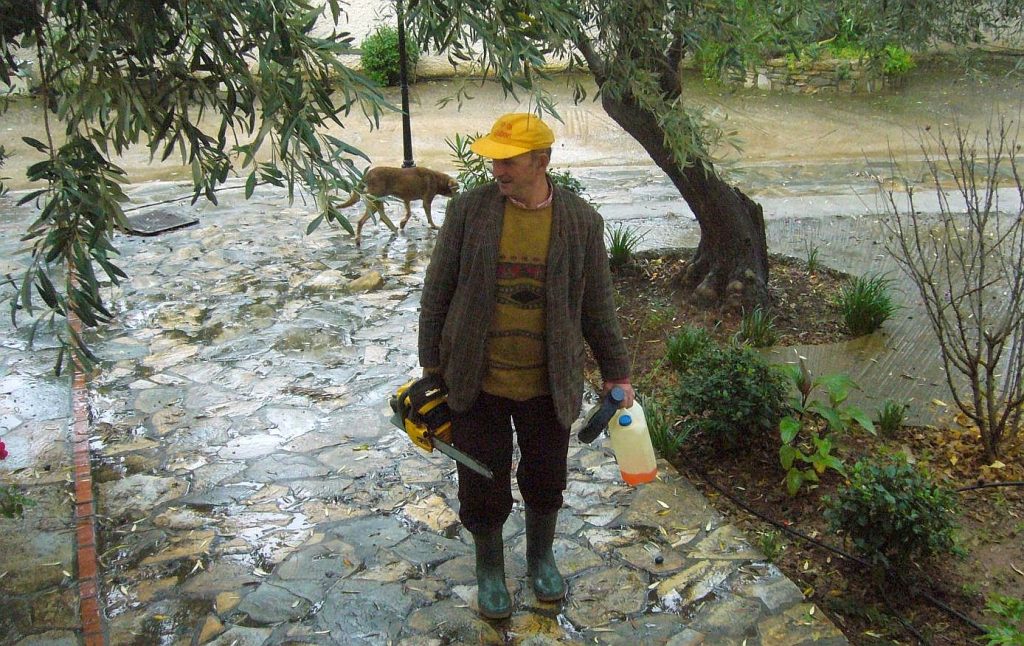 “Well, yes, seeing they were flourishing and seemed always to be in bloom.”

“But I didn’t tell you to cut them back,” I respond.

“Well then, cut me down,” he jokes, making ghastly throat cutting actions. “I’m Albanian. We had the Ottomans. We know about that.”

“Stop! Just stop!” I say, shuddering. He’s been making these jokes for years. We used to laugh, but now in the light of recent horrors they can’t even be thought of.  I throw up my hands as we play through the familiar pantomime. “Do what you like, Costa, do what you like.”

He grins and goes off into the garden, whistling. 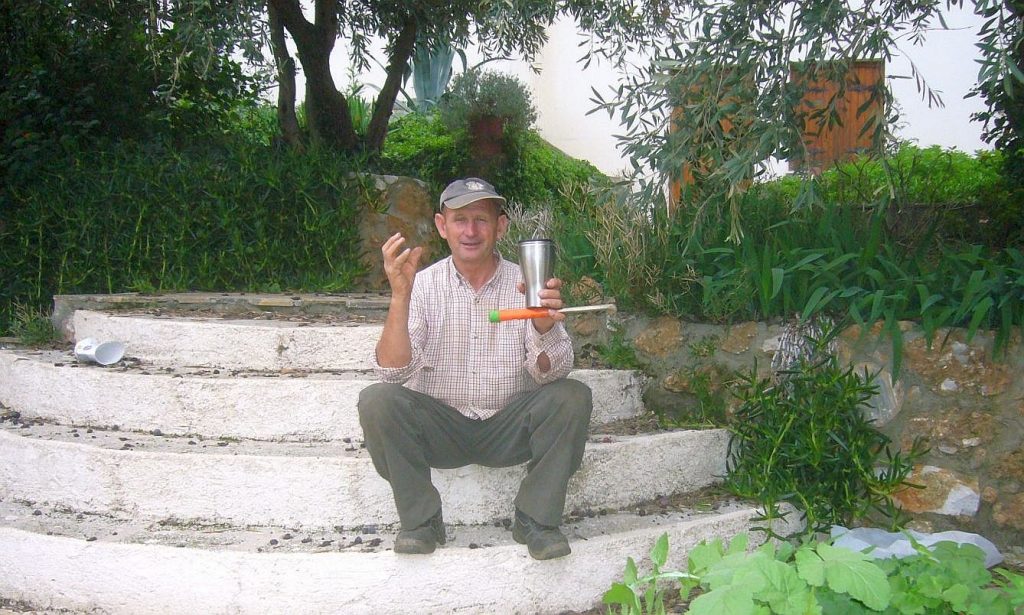 His cheerful whistling is another form of communication for it usually brings at least one of the cats and dogs running. No words needed. It’s probably also a very polite way of Costa pointing out that he’s won. Again! 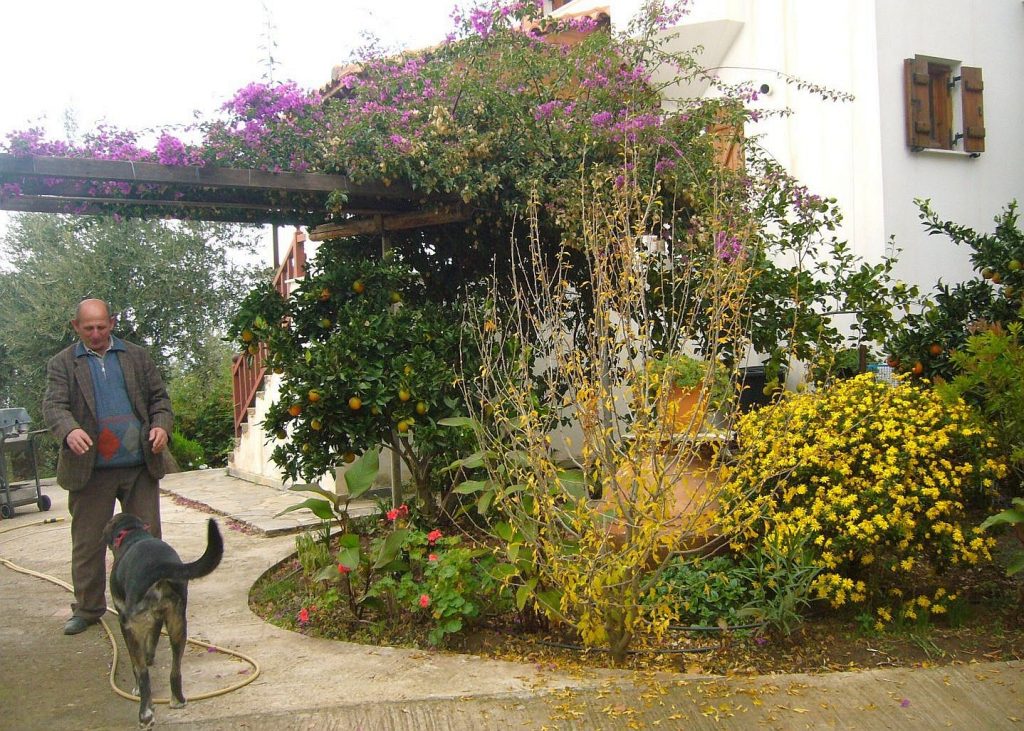 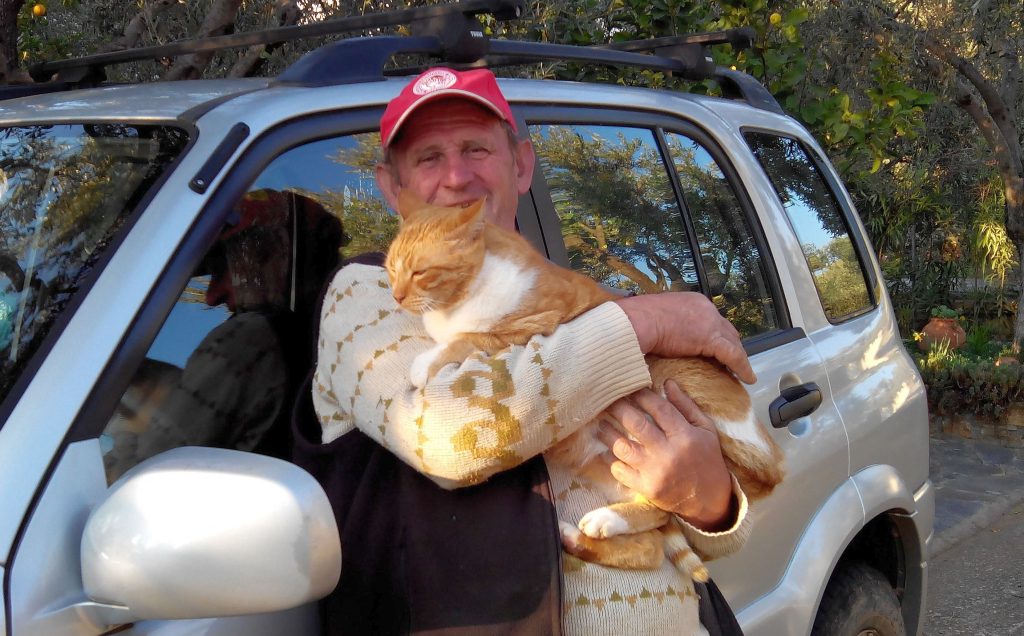 When it comes to people trying to communicate in a foreign language it’s invariably a game of hands. Some cultures ‘speak’ with hands more than others though, and family and friends tell me they can tell what language I’m speaking just by watching my hand movements. I’m not conscious of it, I must say, but it’s interesting to know.

The hand raised in greeting is one of the most ancient forms of non-verbal communication. It’s universal, and when accompanied by smiles it’s clearly friendly. The classic STOP hand signal might however have all manner of connotations, from a warning of danger ahead to a very definite “Get the #$!* out of here!” The accompanying body language often establishes the context. 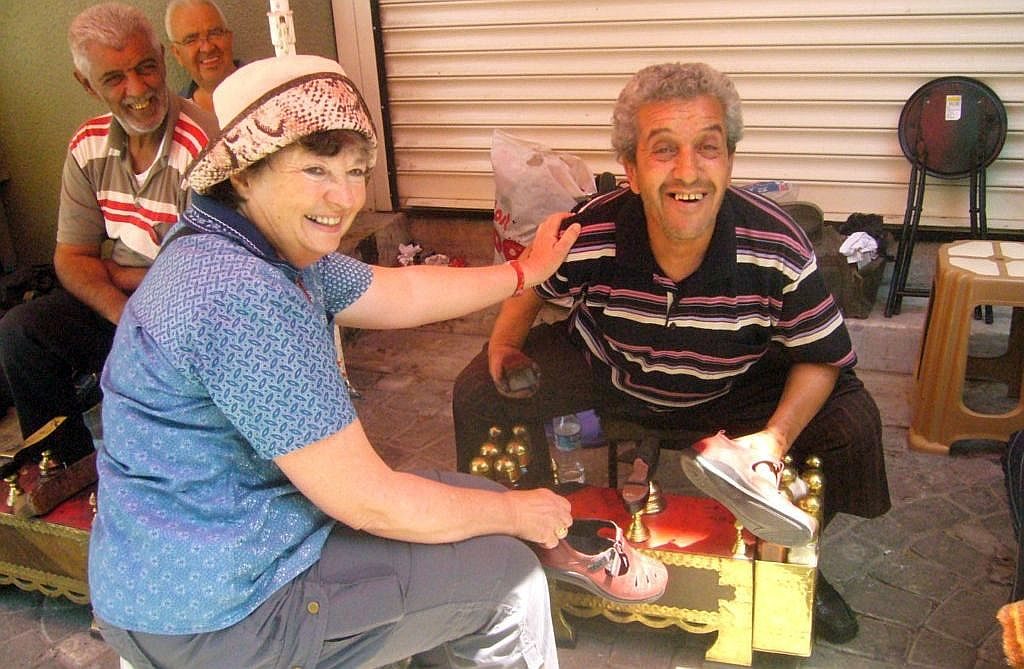 I had a wonderful conversation in Izmir with this lovely fellow and his companions. We laughed, we smiled, we made hand gestures. None of us had the faintest idea what was being said. It didn’t matter a bit. What was being said was that we were having a grand old time just being. They were all such good ambassadors for their country; it’s distressing to think of what’s happening there now. 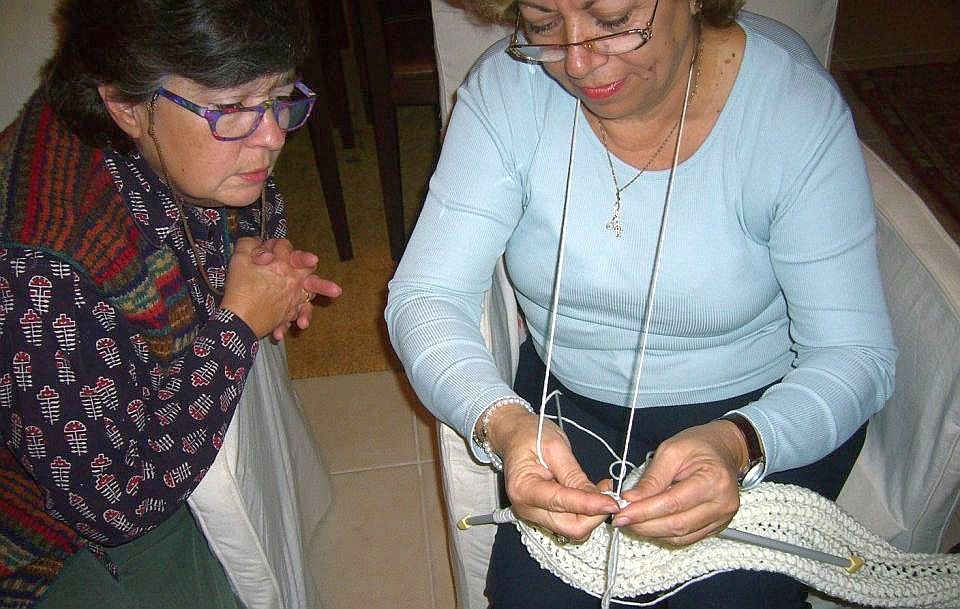 It’s probably not escaped your notice that I love to knit. And yes, I guess I do go on about it. A bit.  Yarn and needles are a language spoken worldwide. There can’t be many countries where the language of knitting isn’t known, where yarn and its attributes and possibilities are not at the very least a dialect.

I have been fortunate to meet knitters in many countries. We have an instant connection – we communicate instinctively without any words. Non-verbal communication is more than adequate when the topic is knitting. The hands and eyes can explain whatever it is you want to know about a technique.

Diagrams and symbols, yet another form of non-verbal communication, can be jotted down and carried with you to be studied again and again, and can be passed on to others. 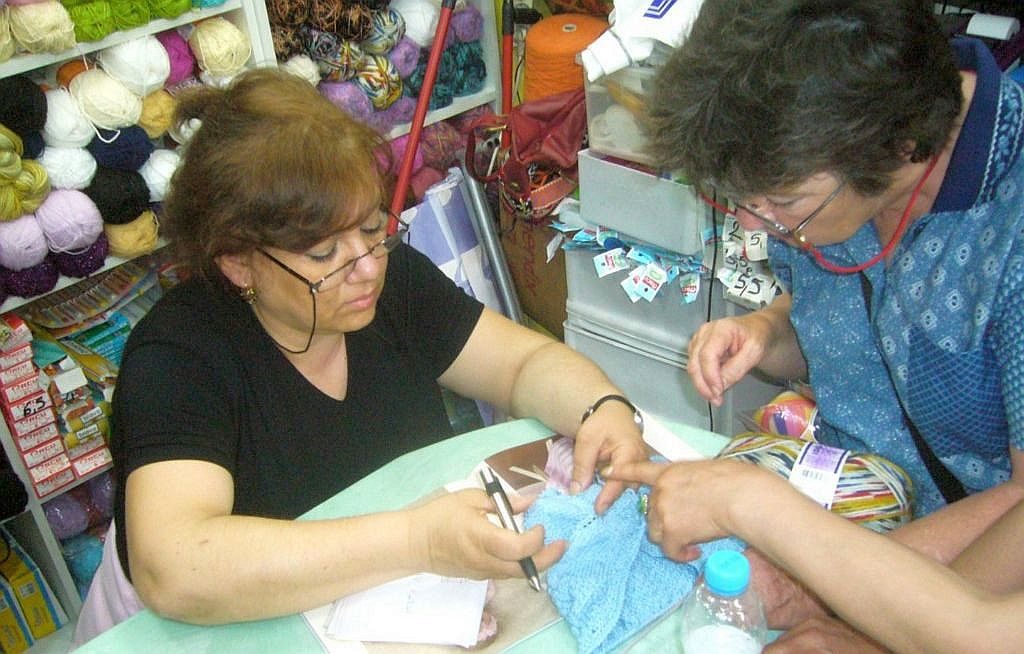 Those who speak knitting are often oblivious to the lack of verbal communication. The spoken language barrier is of no consequence. Demonstrations, the show-and-tell and the tactile signals translate without any effort from those participating in the discussion. 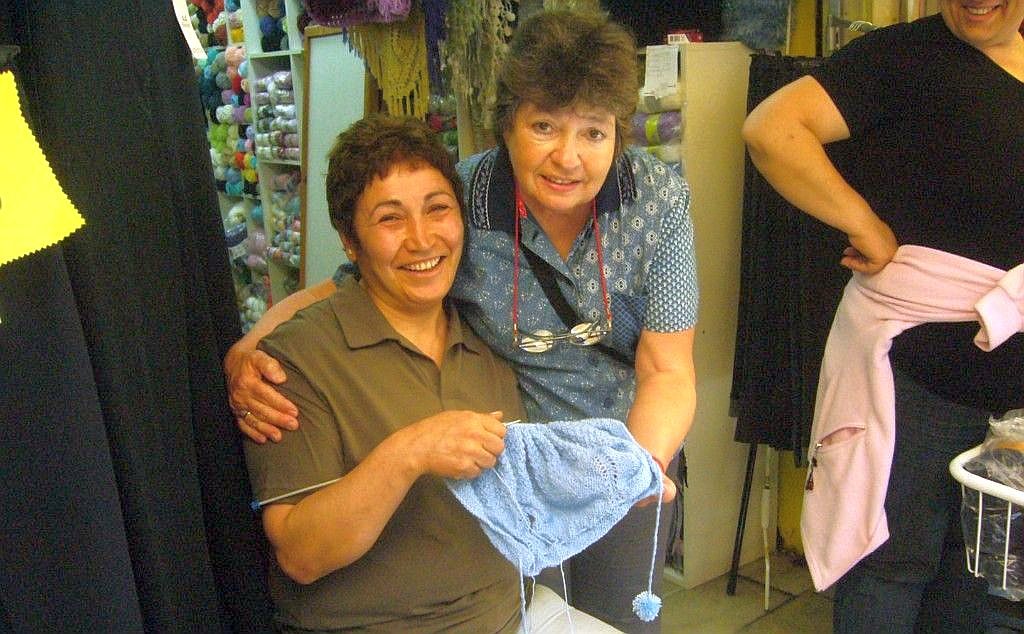 I have never failed to make an instant connection with a knitter whose language I do not speak. I have never been treated with anything but the utmost courtesy, delight and enthusiasm. I have been warmly embraced, offered refreshment and have often had a gift pressed upon me. 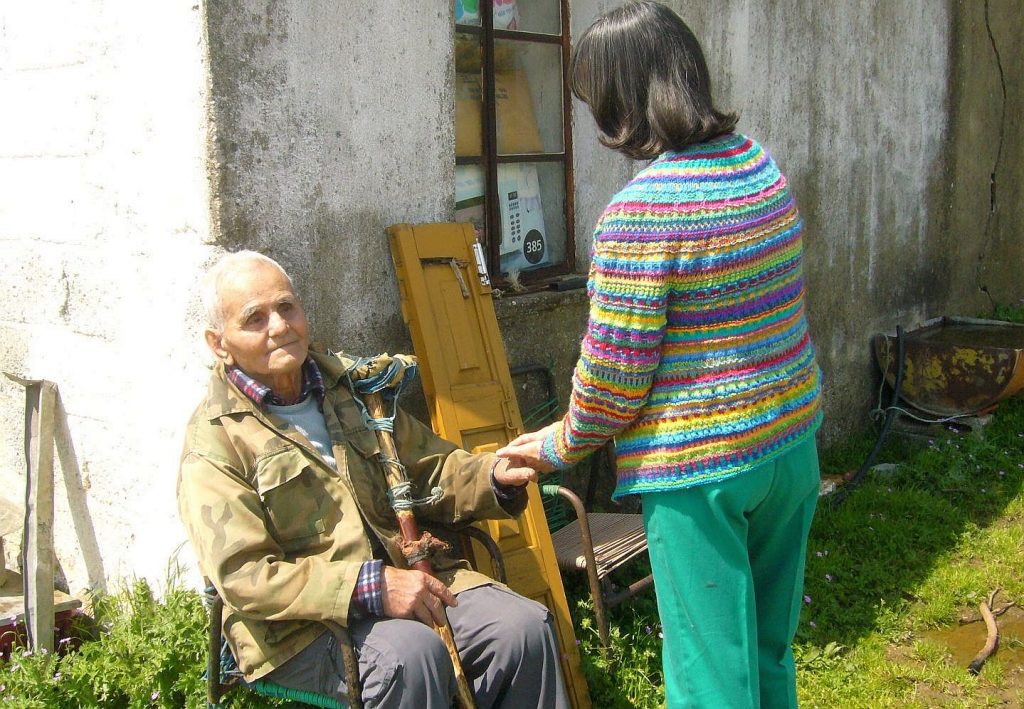 Without my hands and eyes I am reduced. With only my voice to communicate I would be diminished. This photograph of my friend quite literally in touch with a blind man had me close to tears when I took it. They had no common language, but the gentleman could ‘see’ her, he told me, and could tell she’s a very good woman. Communication with no need for words. 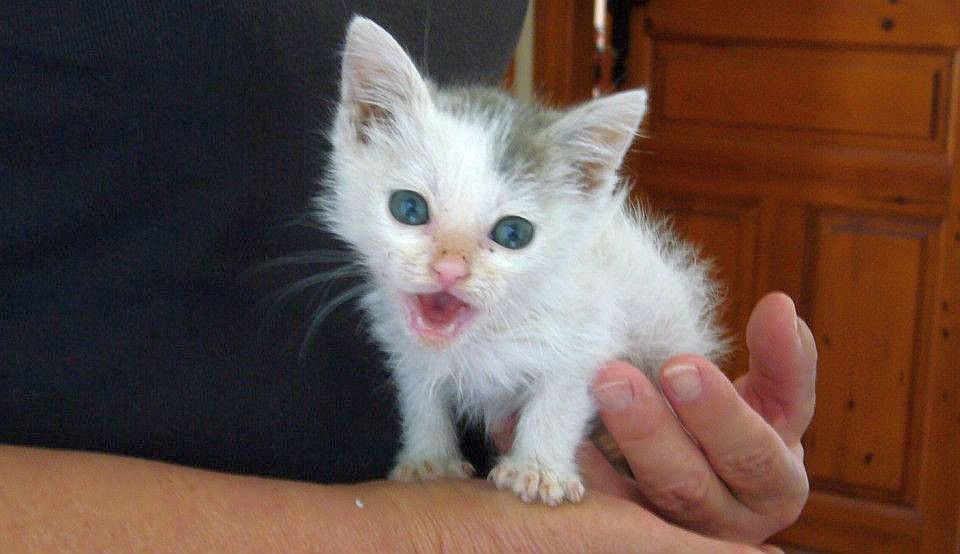 The very, very young typically have enormous eyes, a feature designed to appeal to the protective instincts of adults of that species. That demon Raki is a case in point, and coupled with his pathetic little cries he had no trouble communicating his desperate need for care. We fell for it! 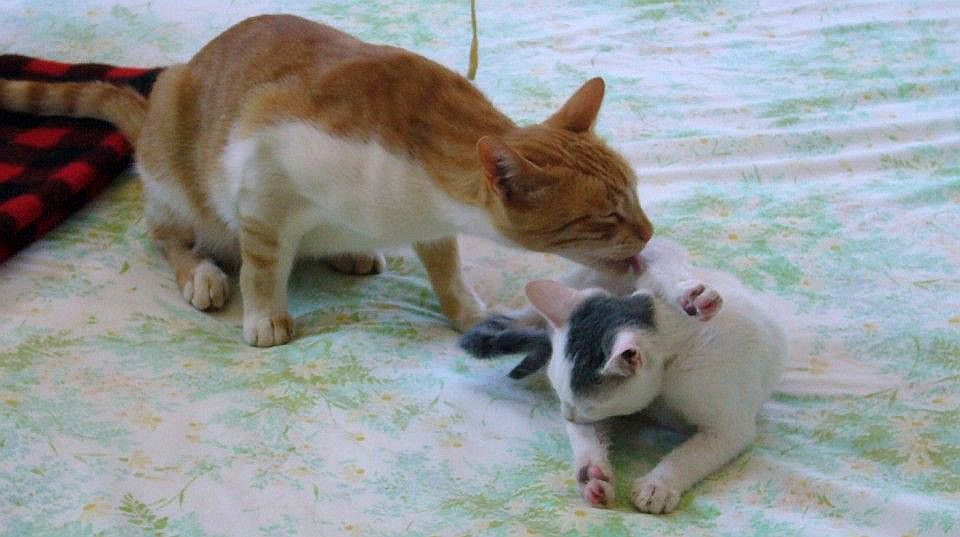 So did Mythos, who communicated a great deal of loving care to the infant Raki, and interesting that he recognized Raki posed no threat to his position as dominant male cat. 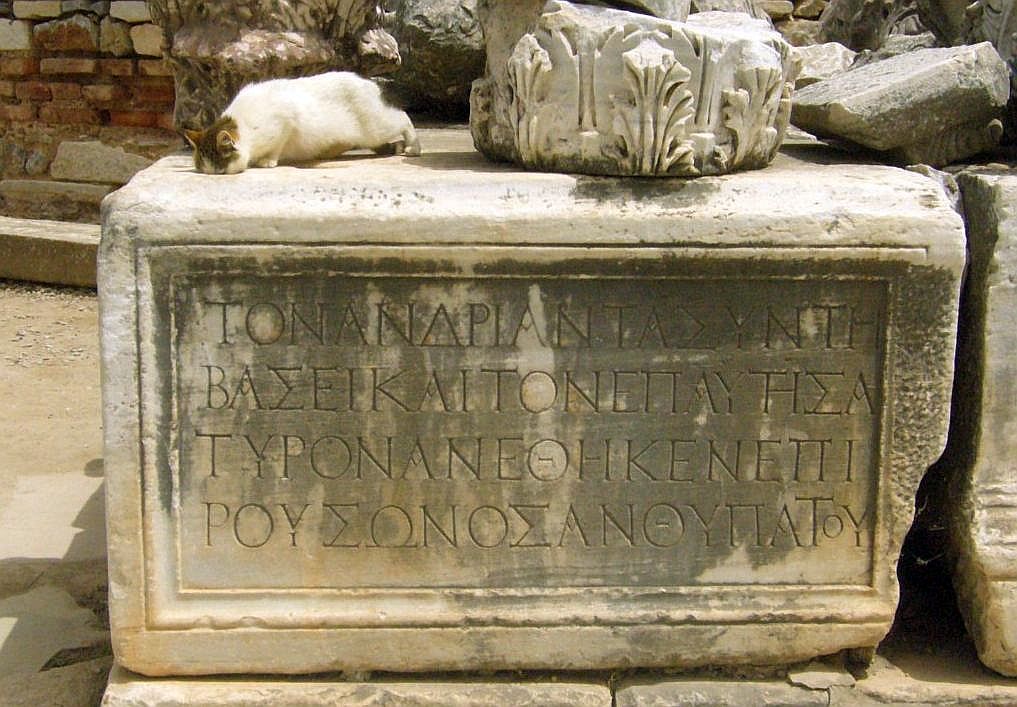 Non-verbal forms of communication such as signs and symbols written in some manner on a surface that can be preserved convey information of every conceivable type, in every language from the most ancient to the very latest graffiti. 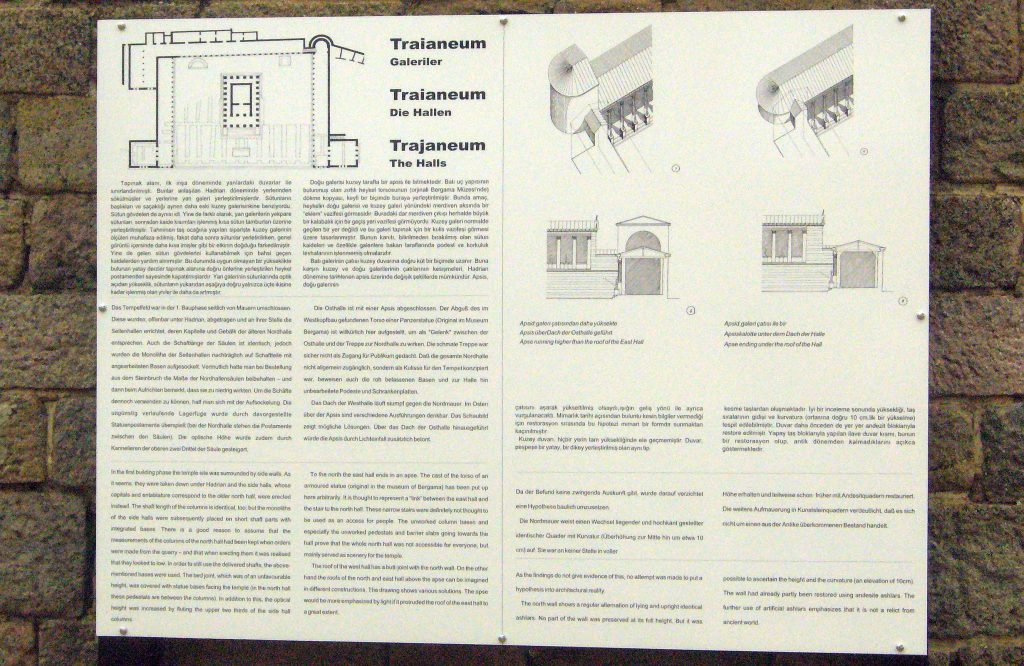 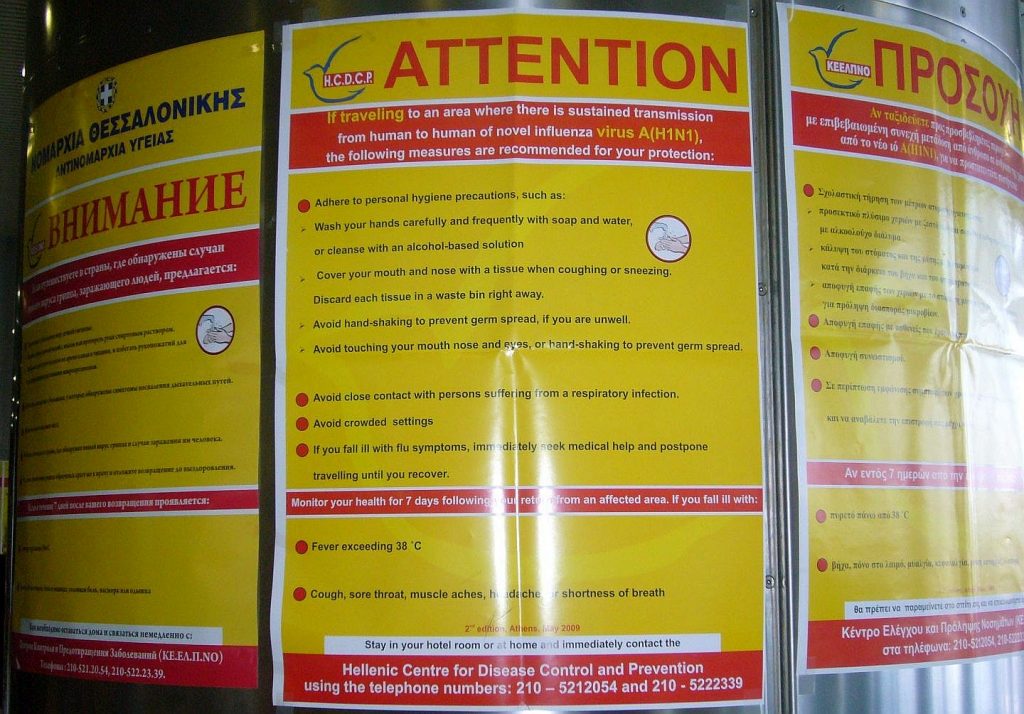 Nothing new about graffiti though – we’ve been making marks where we shouldn’t for aeons. 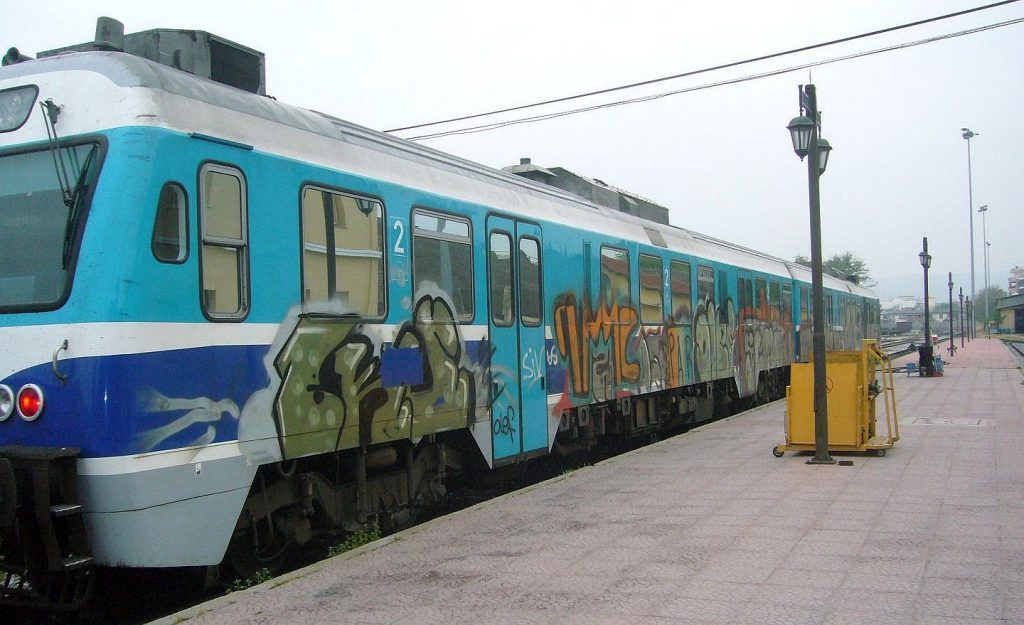 Messages can be communicated in coded symbols by various means, as witness the tally of guillotined heads entered into the knitting of the fictional Madame Defarge. The methods of passing on info through symbols range from messages worked into textiles, from smoke signals to flags, from piled up rocks to carvings on trees and from word and number play to fires and flashing lights. Such communications are limited only by man’s imagination, and that the intended recipient must know the code. 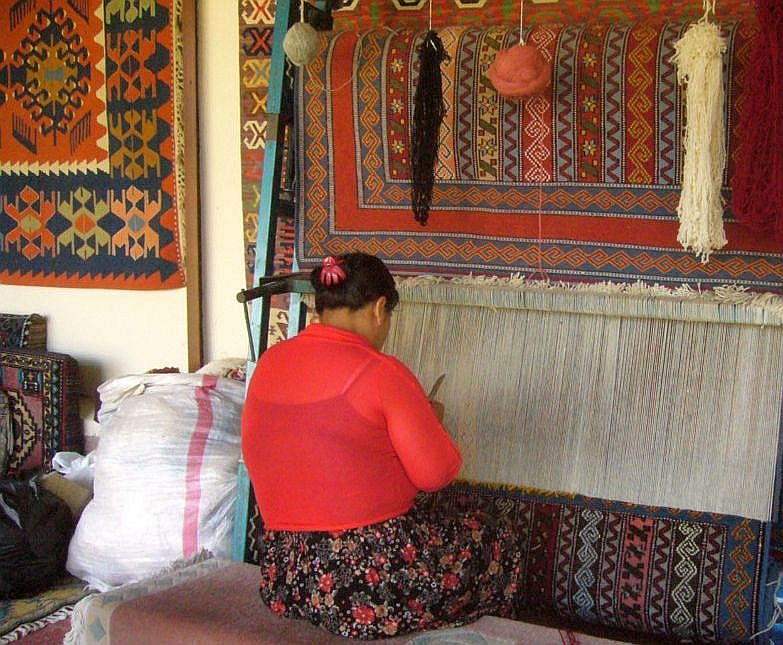 Music and dance are modes of communication with roots almost as ancient as man himself.

Dances are often codified forms of expressing the record of a culture, as this example of traditional dance from the Pelion village of Trikeri shows. 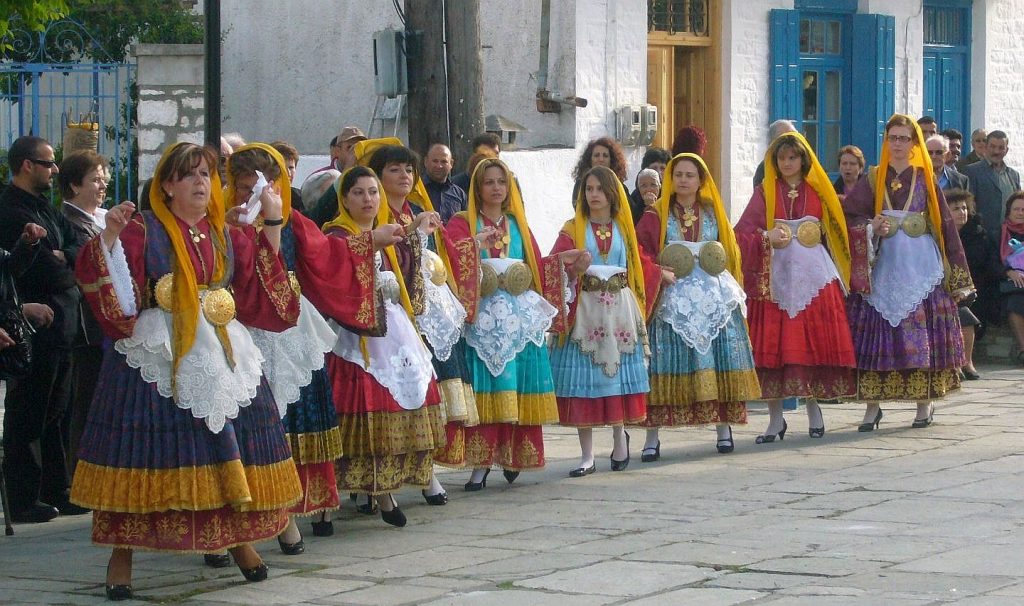 Costumes, simple or elaborate, body painting and various markings used by countless peoples throughout recorded history contain information of importance, not only to the group, but to anthropologists and other academics who might be engaged in studying them. 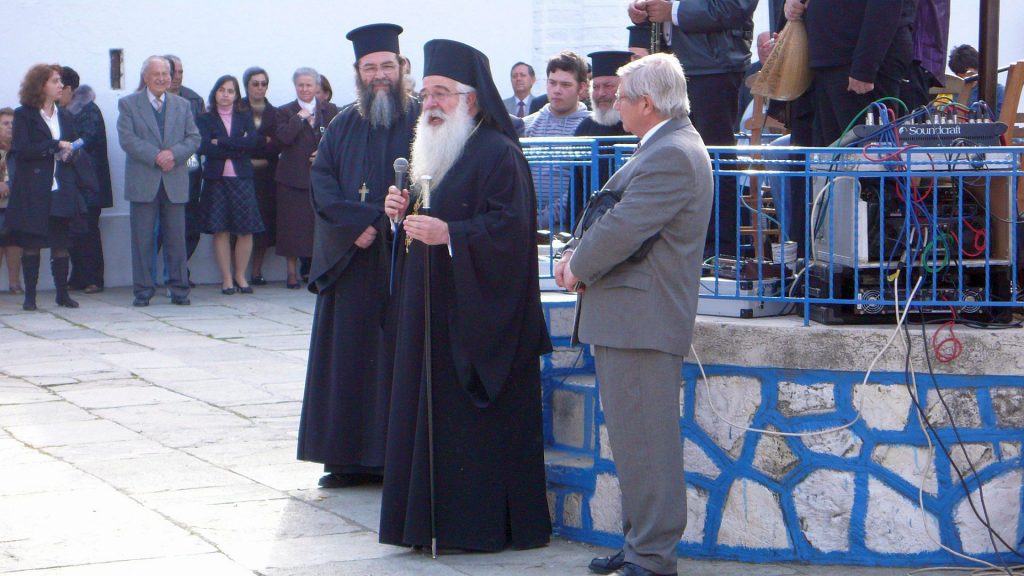 The objects carried by this Archbishop of the Greek Orthodox Church are visual communications, as are the traditional robes, which serve to establish his standing in the hierarchy. These symbols are non-verbal communications of his authority and understood by all who are part of the particular community. So powerful are these symbols that even foreigners understand the implications.

Language and other means of communication have interested me for a long time, ever since I was a small child living in a variety of cultures. I’ve been fortunate to have written a book about language and communication so that kids might enjoy it too.