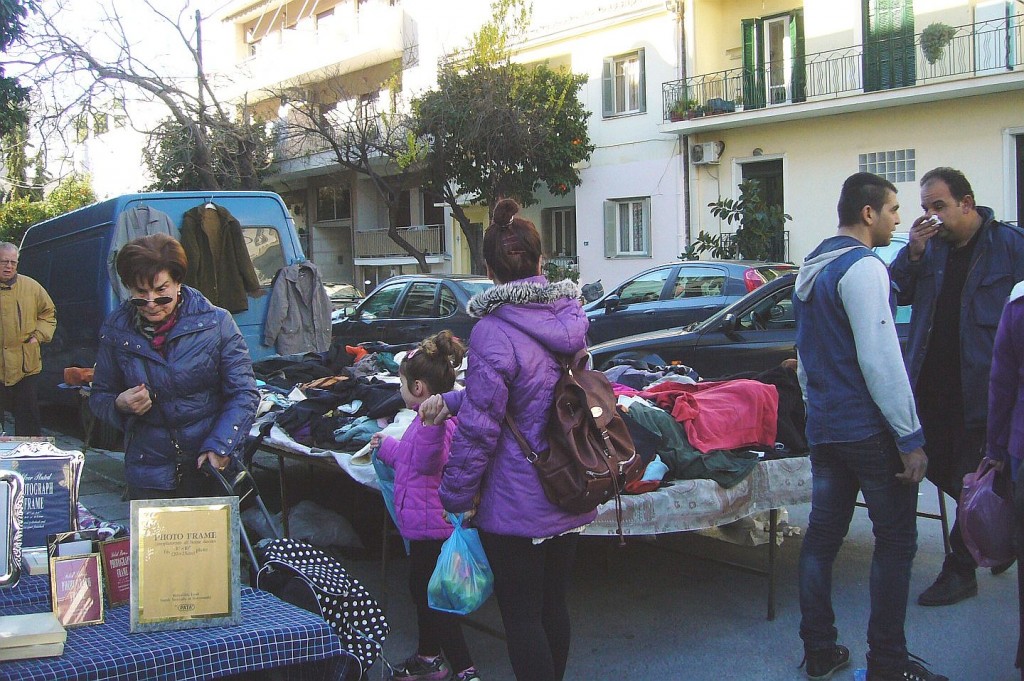 Street markets are a common sight throughout Europe. Many towns and cities grew from ancient beginnings at crossroads where merchants from exotic parts set up bazaars to buy, to sell, to swap news, to plot, to scheme. In short, to engage in all the activities man is capable of.

Several of these markets are historically significant, well documented in book and film, essential destinations for tourist and trader alike. There is much to explore, both in open air and covered street markets, while the careful observer will note that little has changed with respect to human behaviour. Sadly now in certain countries local markets are fast becoming targets for those whose twisted minds seek to sow horror and carnage.

As one travels further and further east across the Balkans, away from the sophisticated culture of urban areas and deeper into the simpler life of isolated rustic communities, the street market has much more in common with its ancient counterpart. The exchange of goods, especially fresh produce, is vital to the well-being of the community. It is not unusual, even today, to encounter people clad almost entirely in handmade garments, people who have never gone beyond their village of birth.

On to the fun! Friends have been regaling me with stories of their fantastic buys in recent months, and as it’s been some time since we visited a Volos street market, we decided to do so this past Friday. Small neighbourhood markets take place on most days, typically offering fish and fresh produce, while the Wednesday and Friday markets are the largest with regard to clothing and household goods.

They can be huge, occupying several blocks, so these markets are required to rotate their locations in order not to inconvenience residents and shopkeepers on a regular basis. There’s a roster determined by the municipality, but because the clothing markets are situated in an area of upper Volos, away from the town centre, it’s not strictly necessary to know exactly where they will be held – it soon becomes obvious as you drive along where the hustle and bustle is.

It’s also apparent that parking is a problem: the streets are narrow, the vehicles numerous, the obstacles many, the crowds large. Nothing for it but to get stuck in. Literally. You can see why we don’t often go. Hubby dropped me at an intersection and went off to sandwich the car somewhere; thank goodness for cell ‘phones which make it possible to locate each other in the throng. 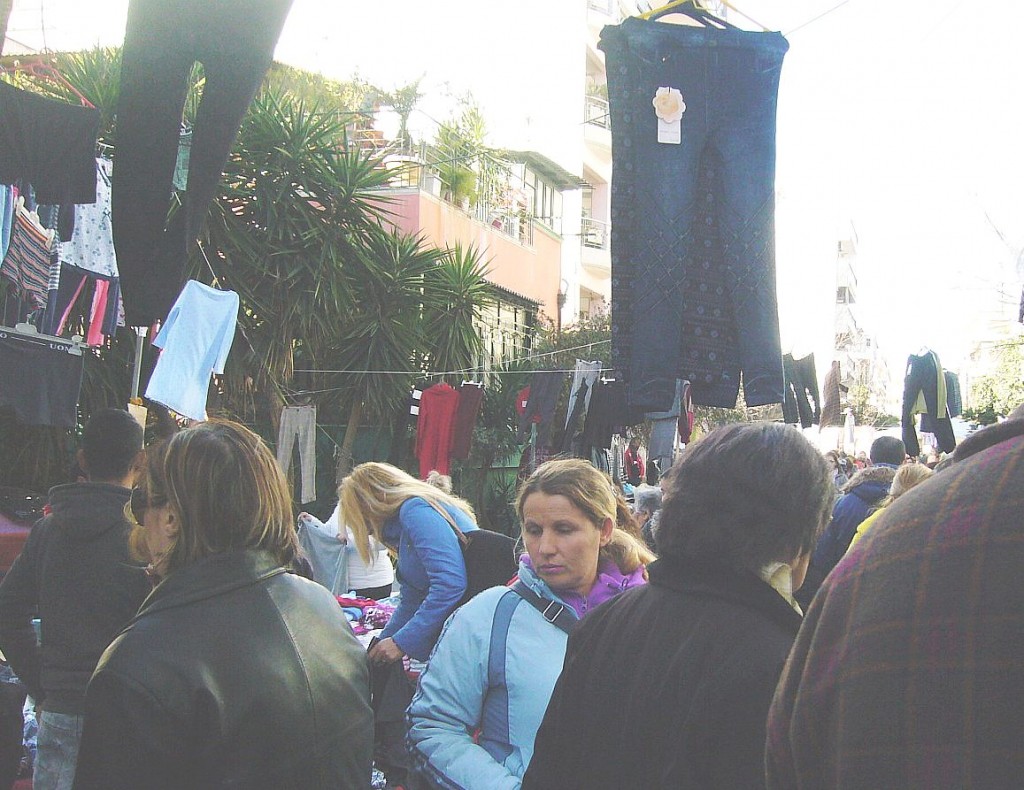 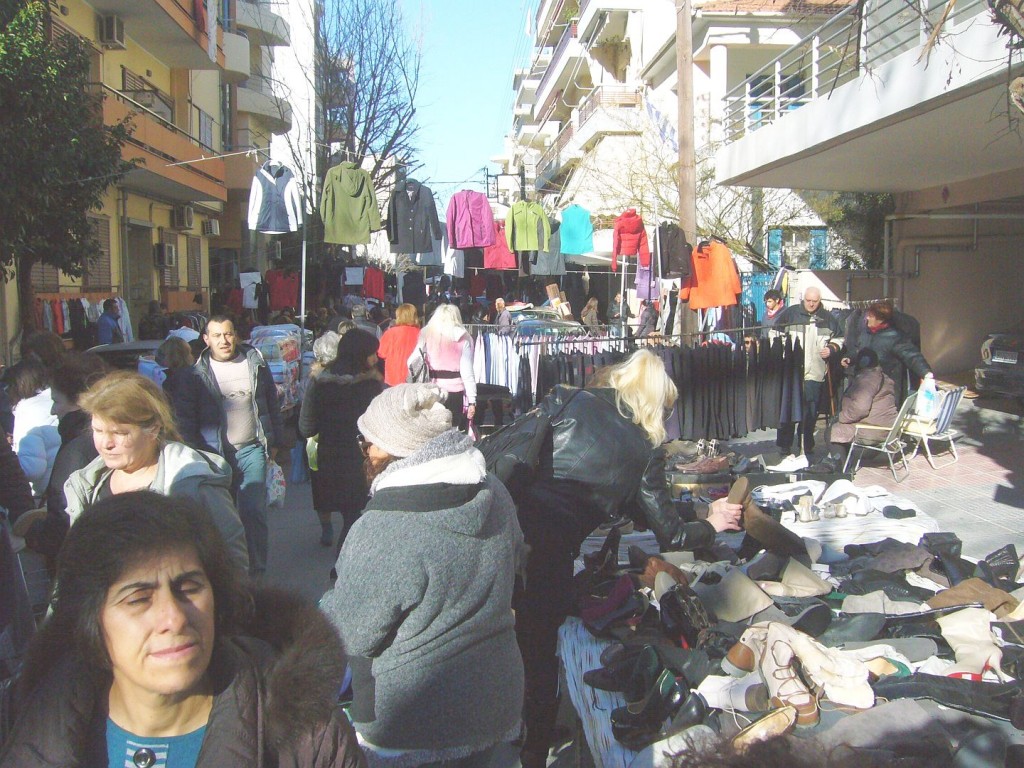 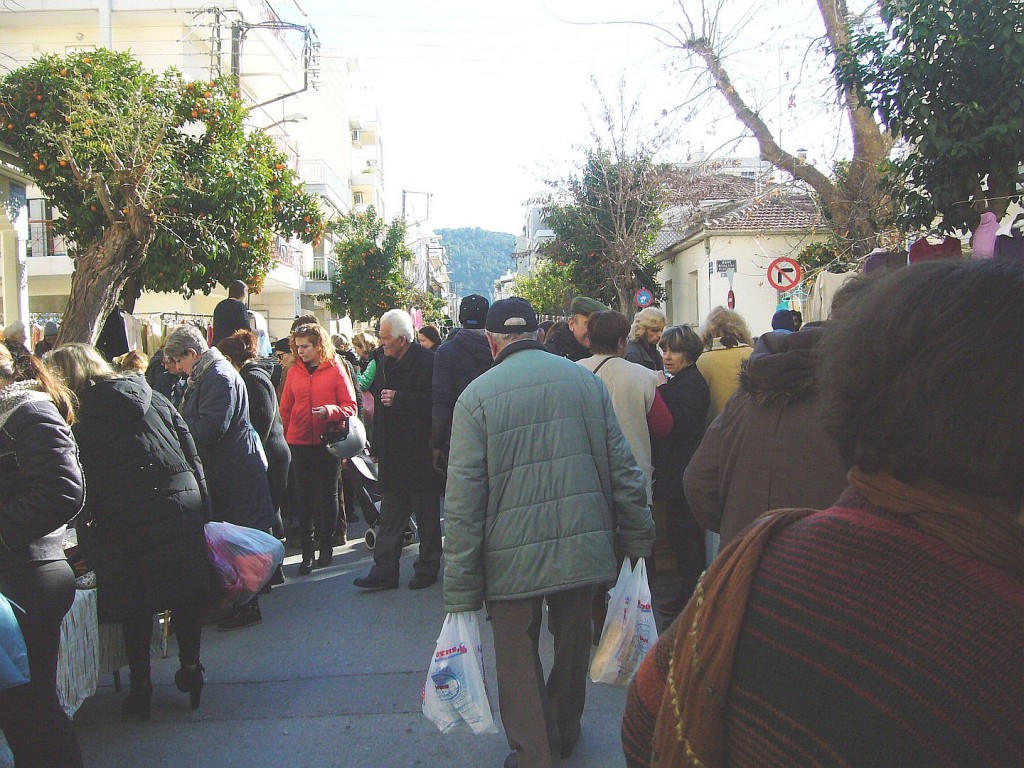 We often joke that you can clothe yourself from head to foot as you meander through the stalls, such is the variety of goods on sale, from shoes and socks, underpants and some rather improbable-looking bras, to sweaters, coats and headgear. You can eat too, if street food’s your thing – souvlaki, sausages, grilled corn on the cob, the ubiquitous sesame bread twists. The smells are tempting but I confess to a certain reluctance to sample them. 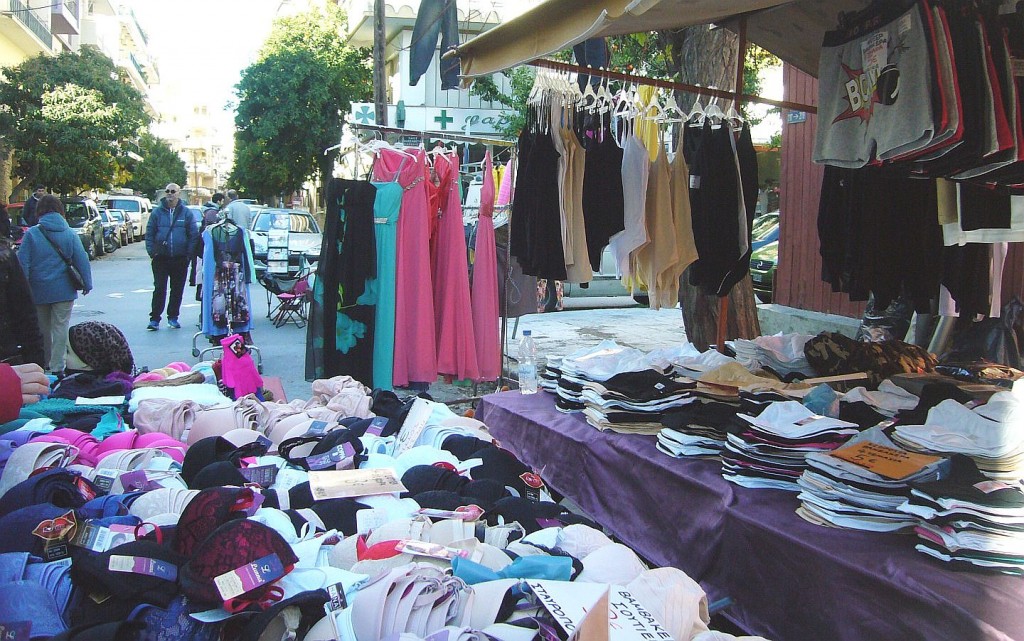 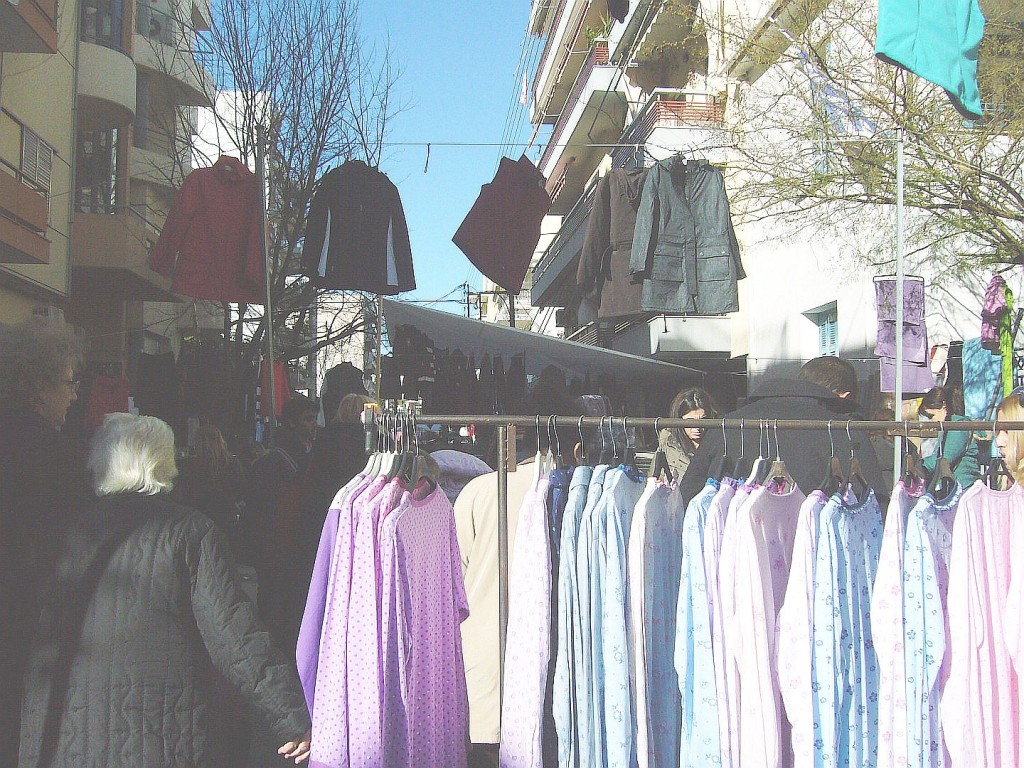 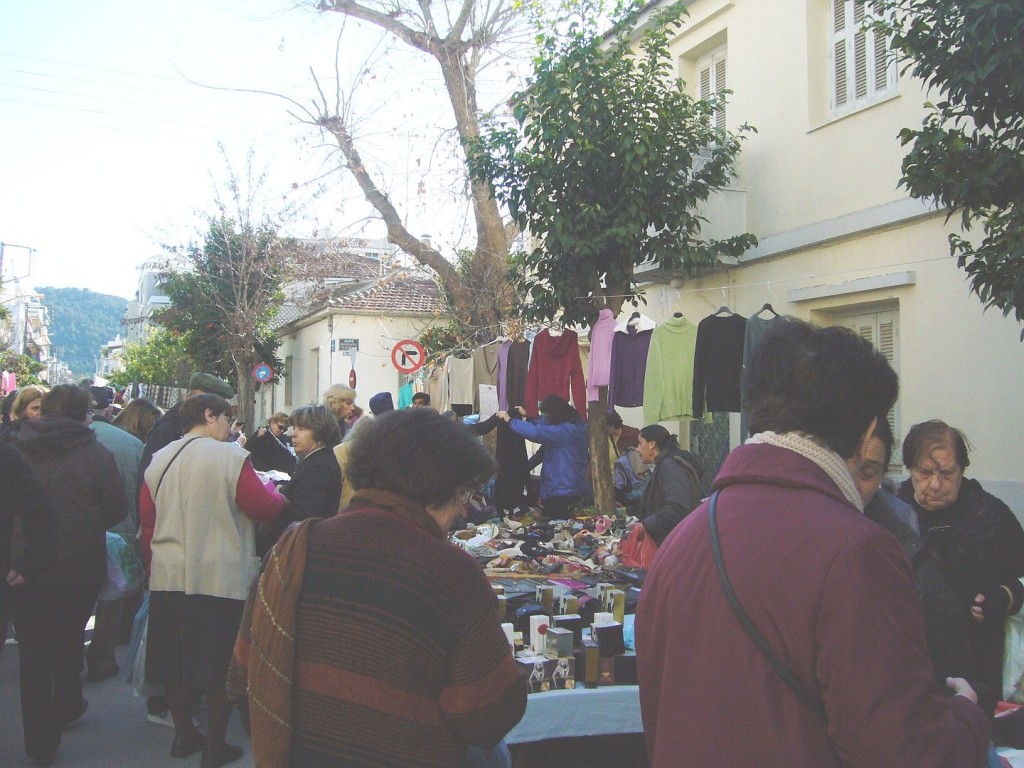 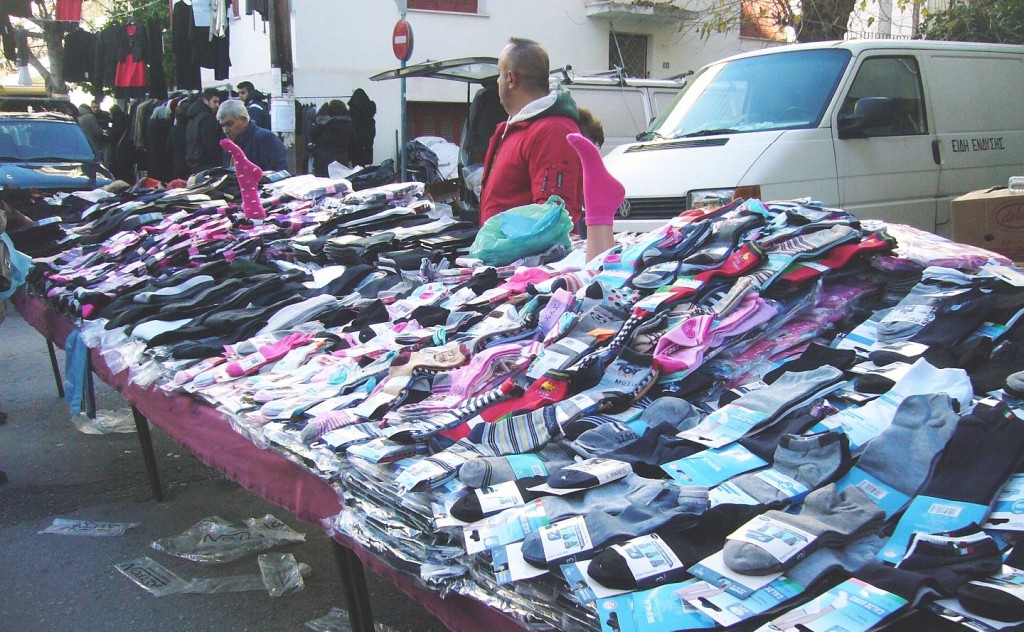 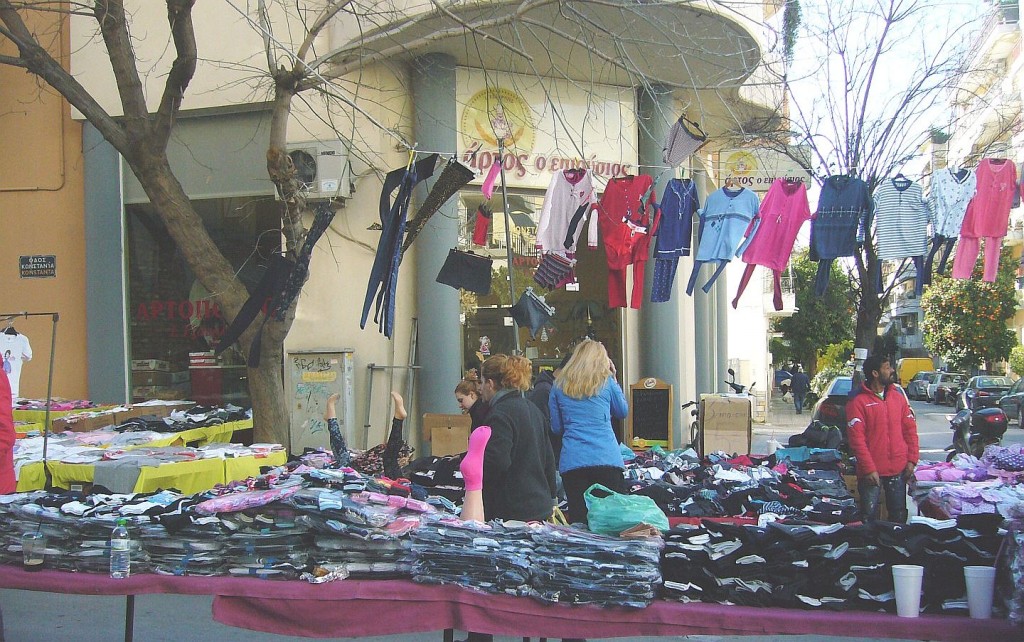 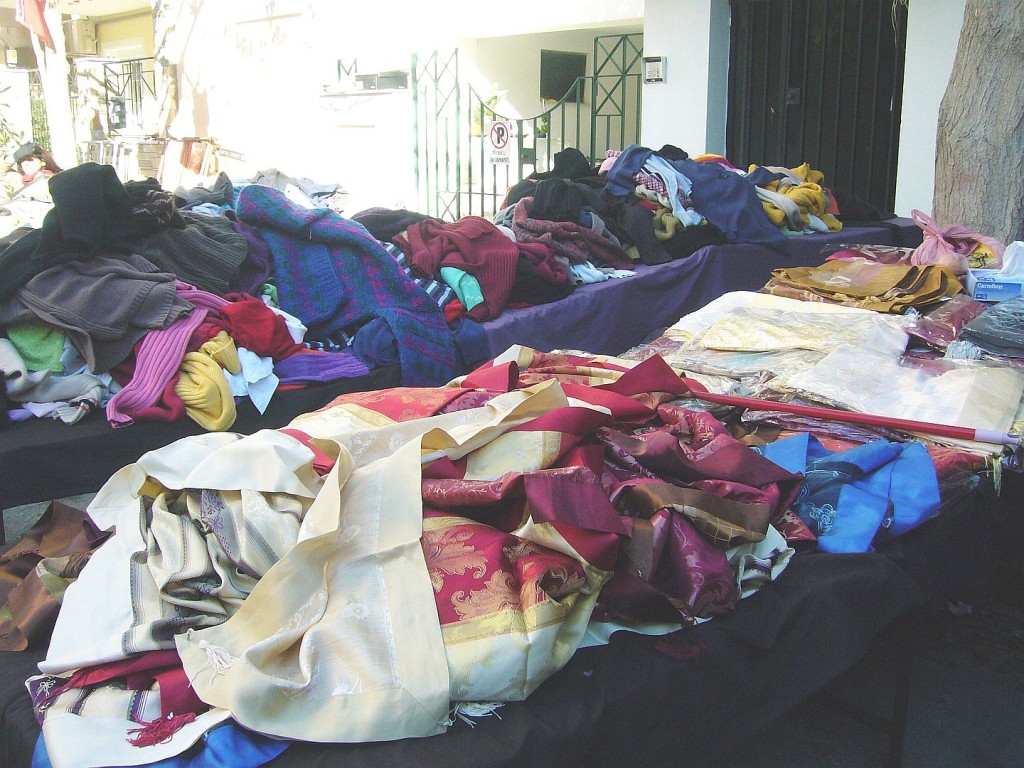 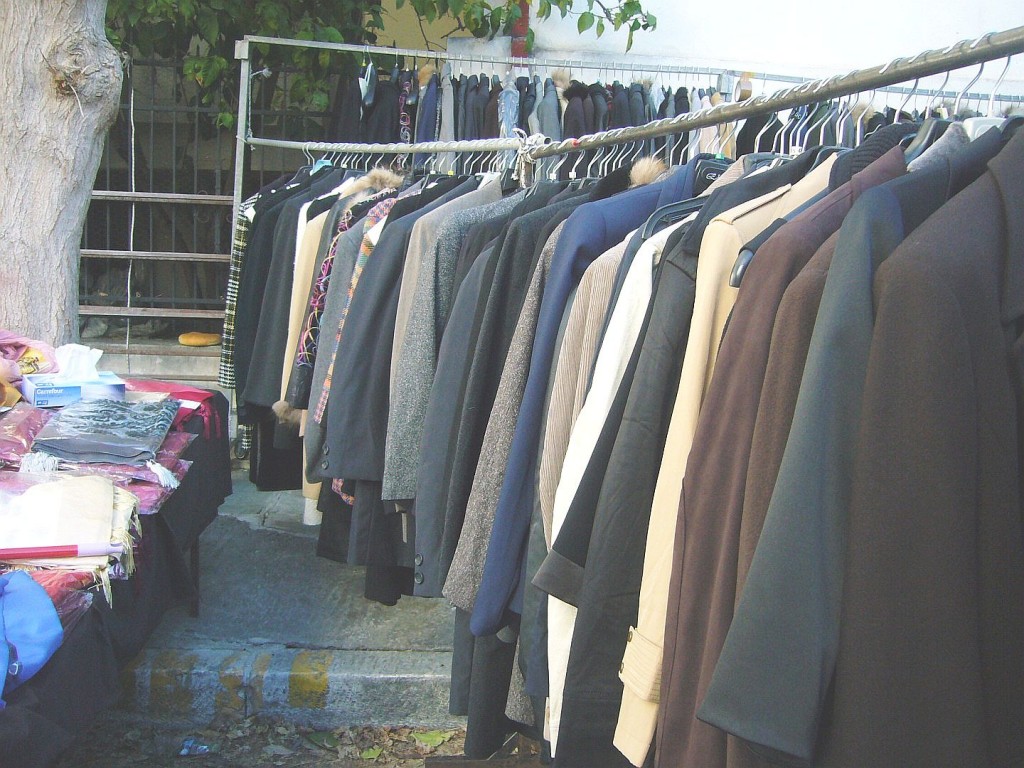 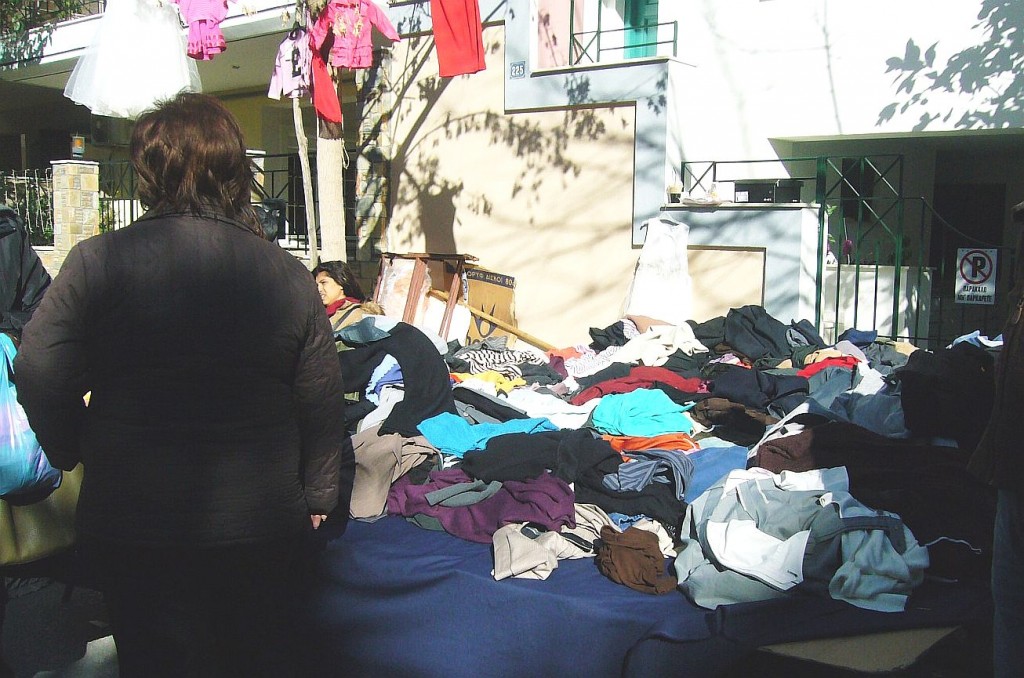 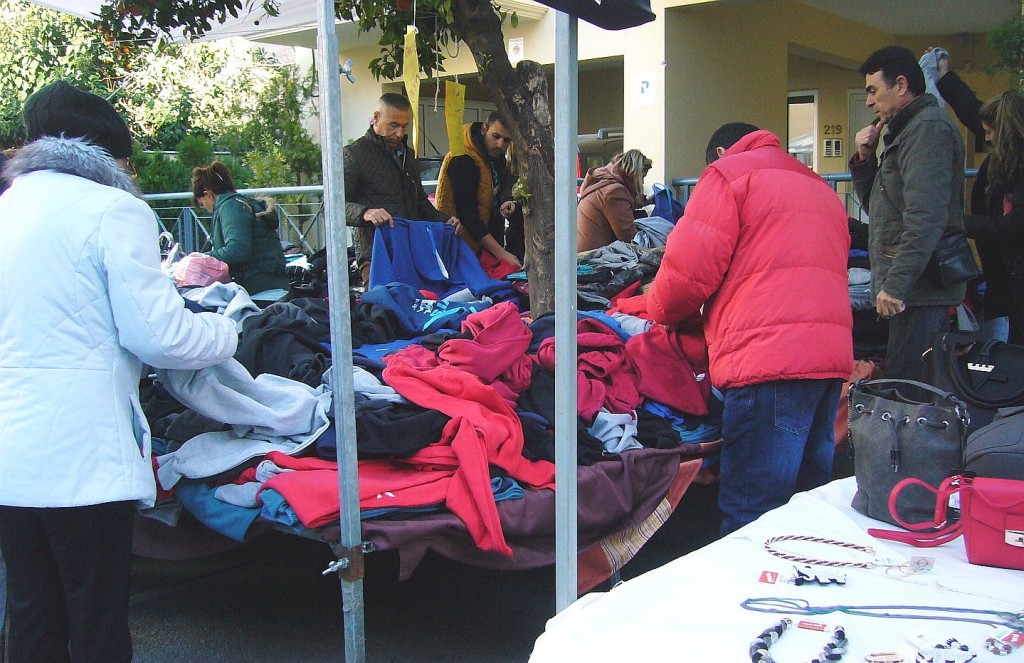 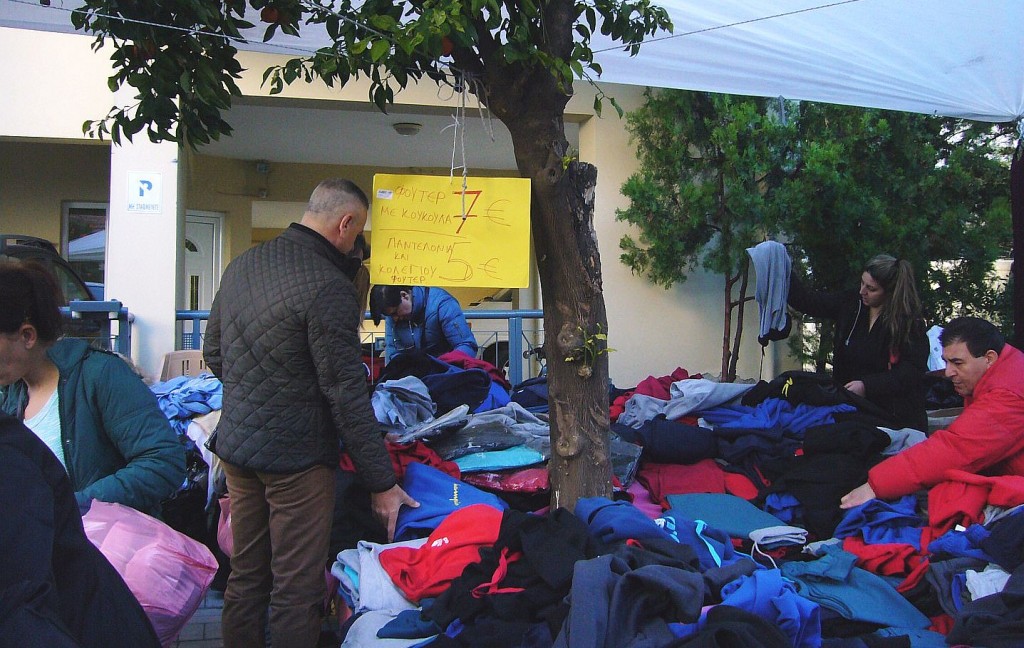 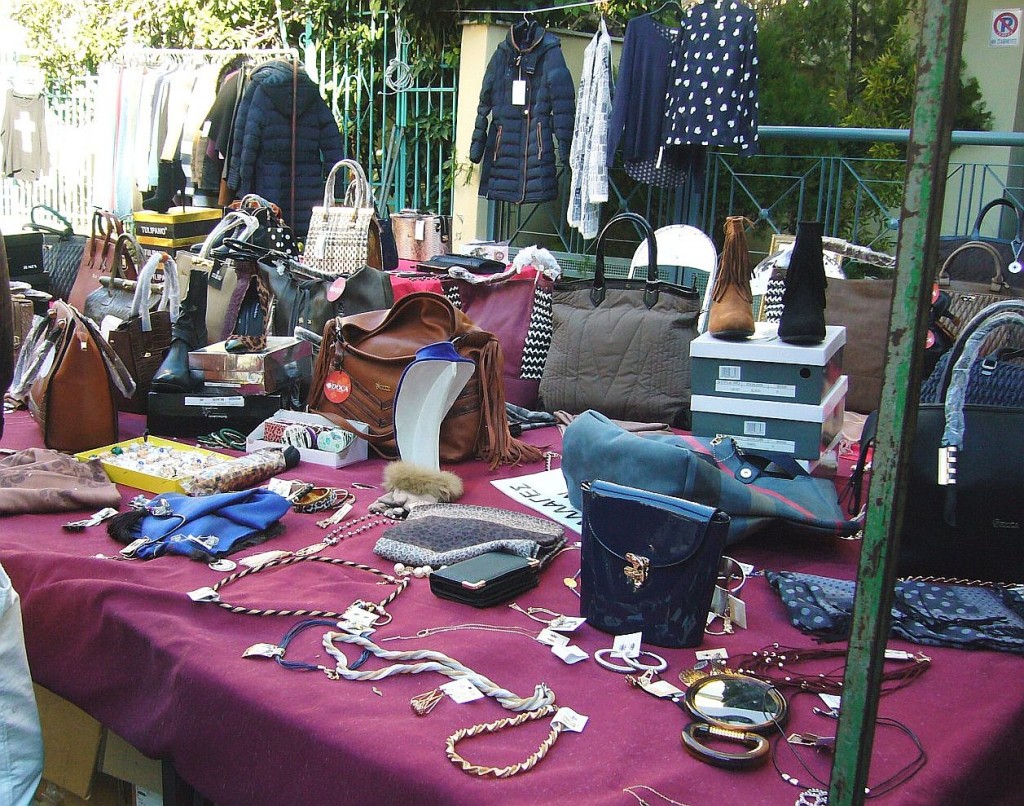 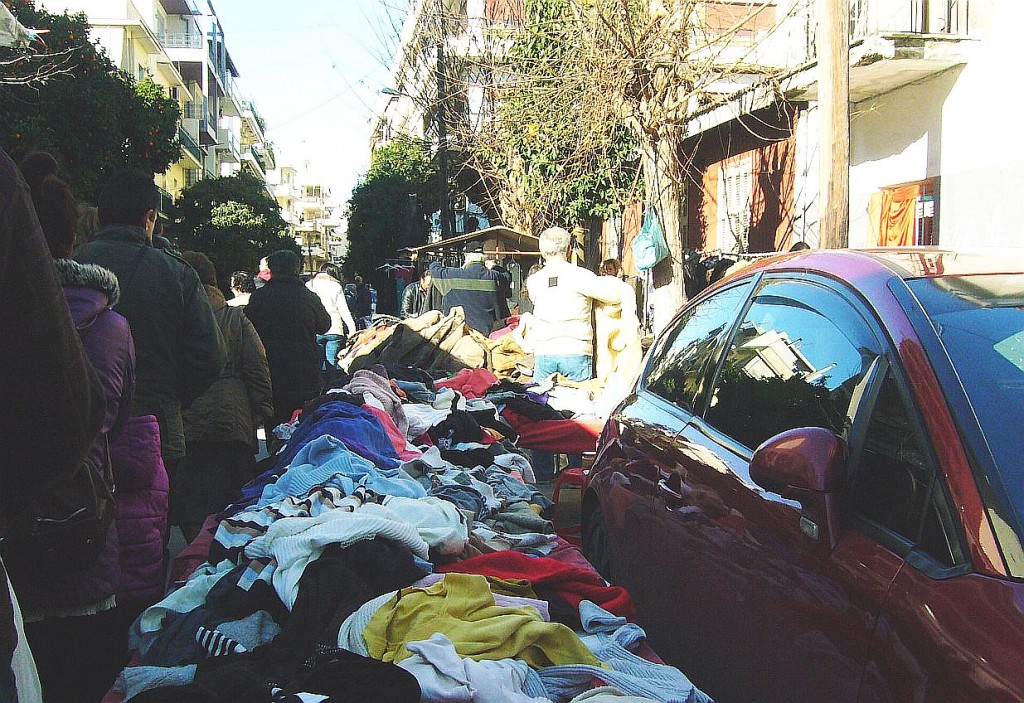 You can take care of personal grooming; you can accessorize; you can clean, carpet, curtain and cushion your home; dress up your dining room; brighten your bedroom, and toss a few new tschotsches about while you’re at it. Depending on your taste of course. 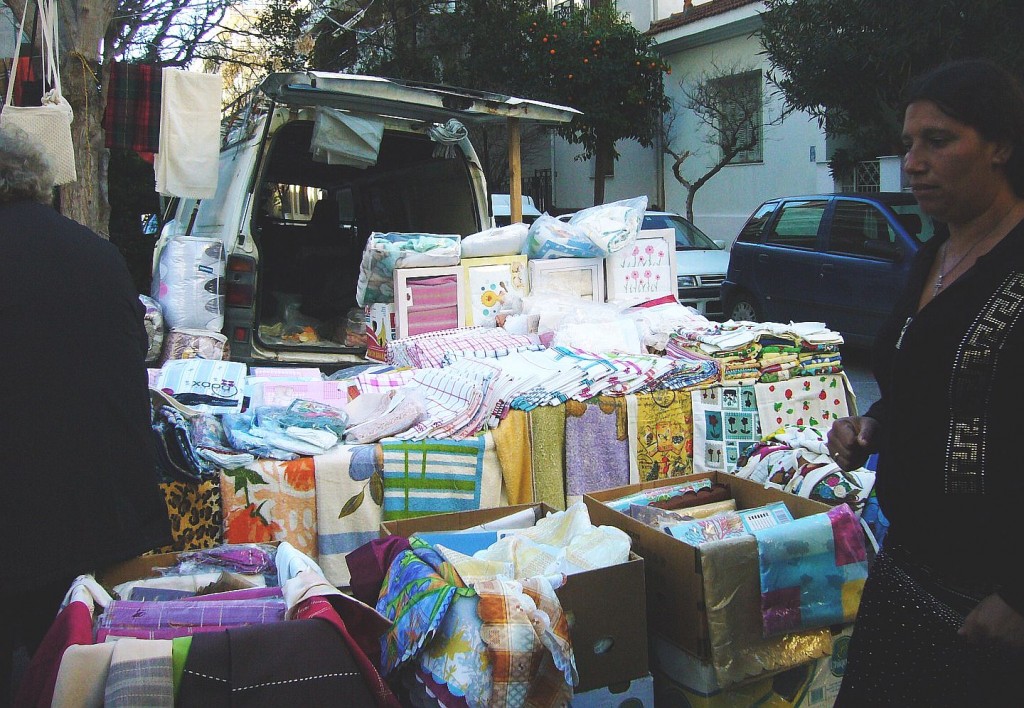 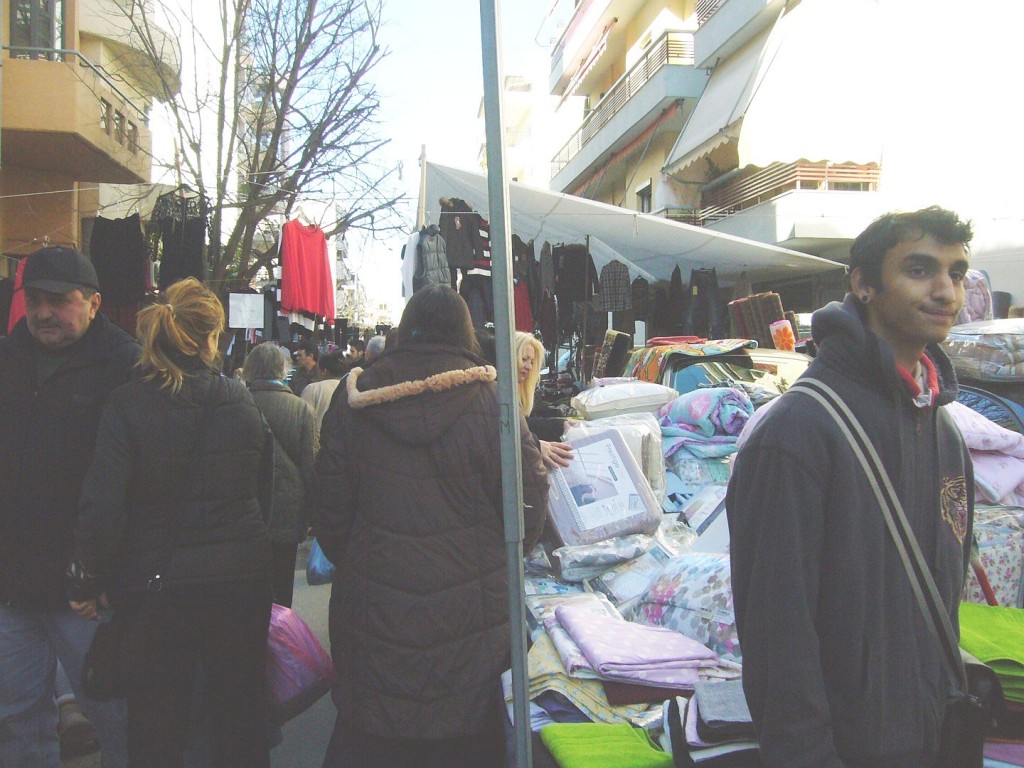 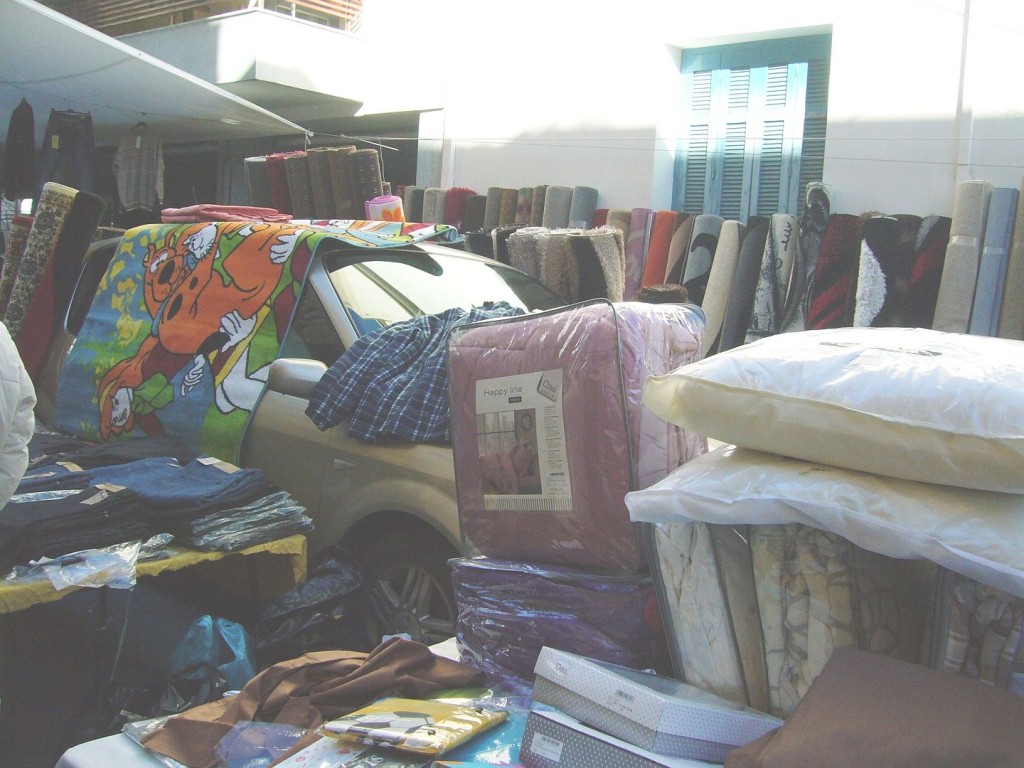 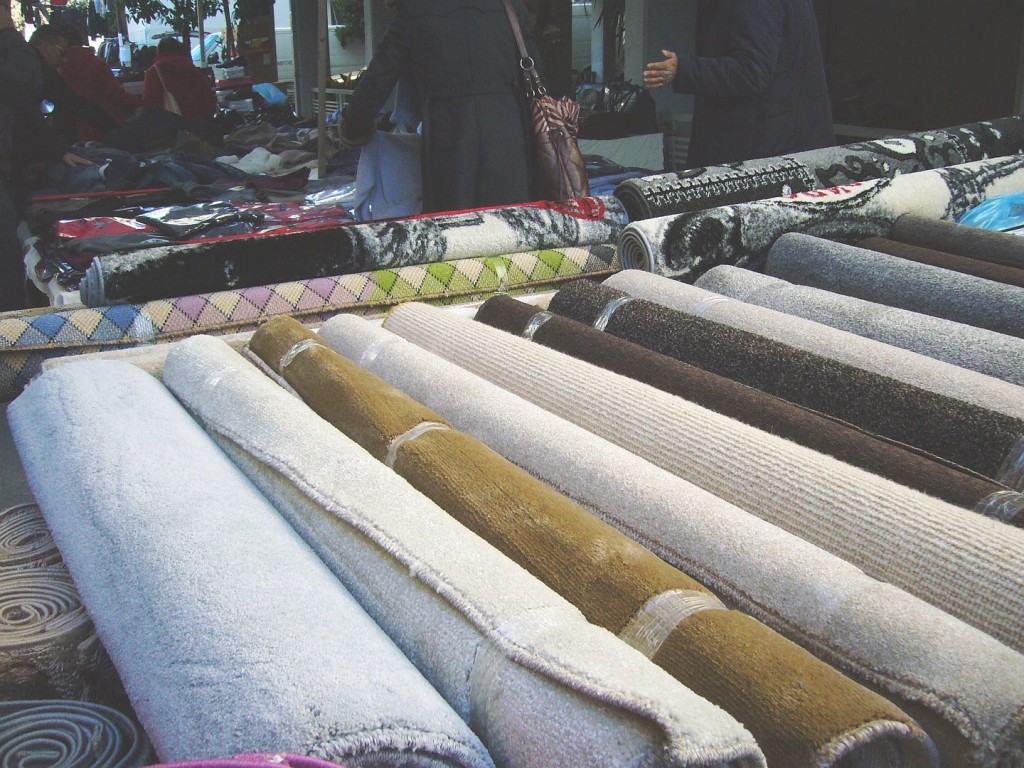 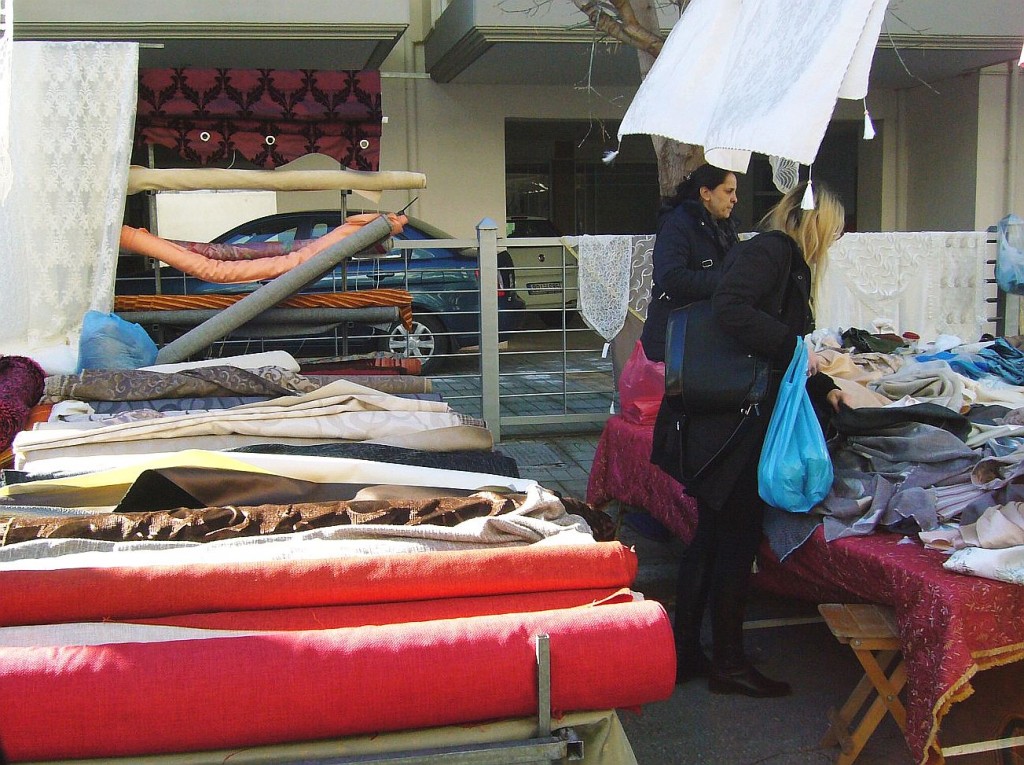 While you may occasionally see a soul selling some interesting item from the ancestral home, the bulk of the goods consists of cheap imports though lately it’s clear that stock has been obtained from defunct business enterprises. This is where the bargains are to be found, good quality clothing in particular – if you’re prepared to rummage through the piles stacked on the trestle tables. Designer pieces turn up – sometimes with the labels removed which I’m told is the practice when prestigious names clear their overstocks – to the delight of the savvy buyer.

Most of the vendors are Roma people, often referred to as gypsies – an offensive term. The Roma in Greece are settled in tightly knit communities, are citizens, and aren’t as a rule itinerant. Their native language remains intact, and certainly here in Greece the Roma are fully bilingual. (It’s worth noting that the Roma I recently encountered in Bulgaria speak a different Roma dialect, as well as Bulgarian.)

The Roma and their history have been of interest to me since childhood, but I’m not going to elaborate on their culture now – I’ll drone on about it another time.

What all the vendors do have in common is their patter, pitched at ear-splitting volume. Roma women often sit atop the tables stacked with their wares, tossing garments at would-be shoppers:

“Look at this beauty! Where will you find such a bargain! Don’t think for one moment you would pay this pitiful amount in the snooty store!”

Their helpers dart about, taking the money, retrieving the goods, cajoling the doubtful into a purchase.

All good fun. I’ve never encountered rudeness, I must say, and find it absolutely fascinating, though I’m not made of stuff stern enough to spend a lot of time in the raucous atmosphere.

I’ve seen the Hawkmoth caterpillars on the property fairly frequently, feeding their way voraciously along, but have never been able to capture a good picture of the moth. Unless one happens to fly into the light, they’re not easy to spot at night but I’ve heard the strange squeak they make; one can understand why primitive peoples were so preoccupied with them. No pesticides or poisons of any sort have ever been used on this land so we are fortunate to have quite a variety of insects which creep and crawl, flutter and fly about on their foraging missions, ducking and diving from their natural predators. Yes, of course the garden suffers to some extent, but it’s amazing how the birds by day and the bats by night sort things out somewhat. The colourful Death’s-Head Hawkmoth caterpillars are so striking that the lowly worms inching and squinching their munching way along seem insignificant by comparison.

Knitting needles, a few yards of yarn and a button or two – I give you GoogliBugs. With a lot of luck, these may become moths and butterflies!