A HAT FOR OTZI

That poor man! I can’t imagine what he went through, and how difficult his life must have been by today’s standards.

I’ve lived in the Austrian Alps. I’ve hiked there, even in winter. Not in blizzard conditions of course, but certainly through deep snow, equipped with the proper boots, thermal underwear, ski jacket, hat, gloves and trekking sticks. The whole nine yards. Note, I said hike. Not me for the ski run and all that suicidal careening down gradients designed by Nature for mountain goats to frolic on.

Ah yes, hats. Many and varied did I knit. I’m not convinced that much heat is lost through the head, and apparently scientists have more or less debunked this notion, but certainly a warm, fleecy cover on one’s noggin is a comfort, and so much better if the headgear is bright of colour, in my humble and much-biased opinion.

Back then to my favourite older man. Much older man. I suppose his bearskin hat did ward off the elements to some extent, though as I’ve mentioned before he seemed to have trouble keeping it firmly affixed to his head, given that the leather ties had been broken and then knotted together again.

I’m no historian of Neolithic clothing but although wool was known and used by Neolithic peoples in other parts of the world, it appears this excellent insulating material wasn’t available to Otzi and his folk. Seems sheep had yet to find their way high up into the Alps, or at least trade in fleece hadn’t begun here at that time; I’m happy to be corrected on this point.

Ever since we met, Otzi and I, his lack of a snugly-fitting hat of warm wool has spun its way through my imagination on occasion. A hat for Otzi should surely not be coarse and bulky like skins and furs, but soft and cosy. It should be somewhat waterproof, as indeed his bearskin cap was, but able to hug his head against the vicious winds that whip and rip through the Alps.

Otzi needed the protection afforded by felted fabric. Austria is famous for its wonderful Loden cloth which is not actually felted, but fulled. Wool yarn is first loosely woven or knitted, then subjected to a controlled process of agitation and boiling, until the wool fibers shrink and mat together into a dense fabric. This density makes fulled fabric exceptionally warm and very hardwearing; it does not ravel, it can be cut, and it can be moulded to any shape.

I have quite a bit of oiled Shetland tweed yarn in my stash, a perfect yarn for my tribute to Otzi. Such yarns, spun in the oil, can be unappealing to knitters who aren’t aware that once the finished item is well washed in hot soapy water the oil is removed and the yarn fluffs up, becoming much softer. Tweed yarn for Otzi then. Tweed, with all its inviting little flecks of color, to warm and cheer him.

Two colours, I decided. Two colours, as his clothing had been so drab. Brown for earth and rock, blue for the sky so far above him. To think he perished, alone, all those thousands of years ago, and now esteemed scientists devote their careers to him.

His hat didn’t take long to knit. I used a larger size needle than the yarn usually calls for and knitted an overly big hat. I gave it a deep brim so that it can be worn doubled, or pulled down to cover part of the face. The resulting hat, prior to fulling, was of course floppy and stringy and looked quite odd, but the magic was yet to come. 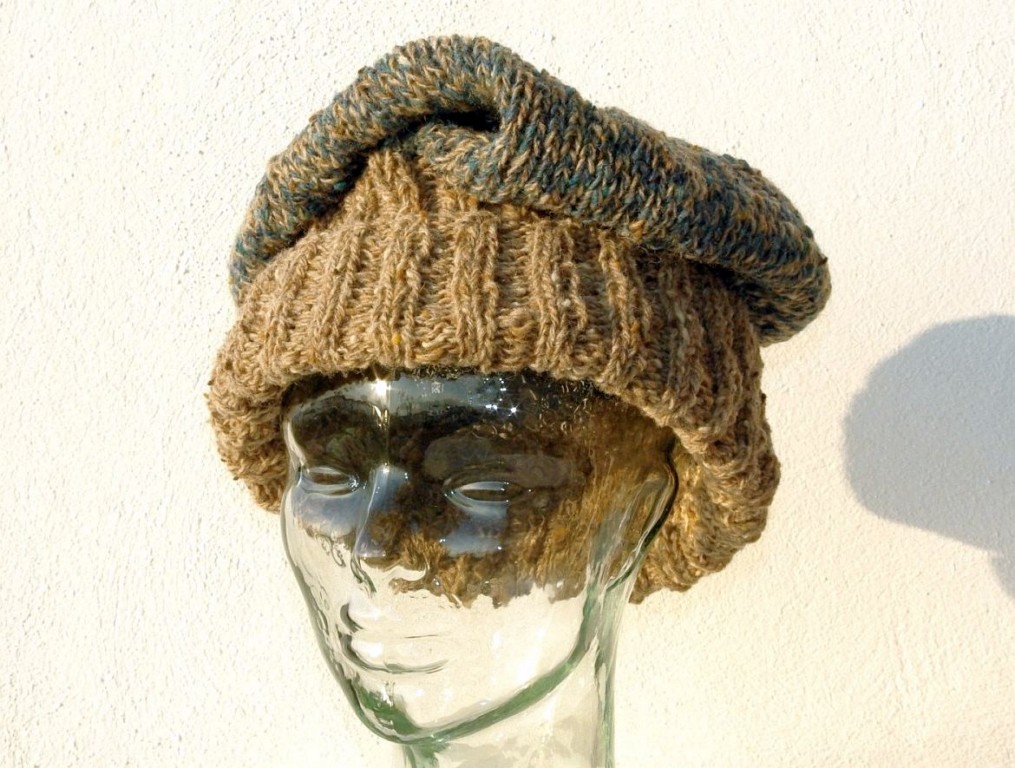 Bucket of very hot water, bucket of cold water, bottle of dishwashing liquid, rubber gloves, and go… I love this part! The idea is to agitate and aggravate the woollen item by rubbing it hard in the soapy water, plunging it in and out of hot and then cold water. The water has to be changed often so that it remains as hot/cold as possible, and the item must be checked frequently to monitor the rate of fulling and shrinking.

When satisfied with the result, I rinsed it thoroughly and rolled it up in a towel to blot excess moisture. Poor Jason sat outside in the sun all day while Otzi’s hat dried, never saying a word. 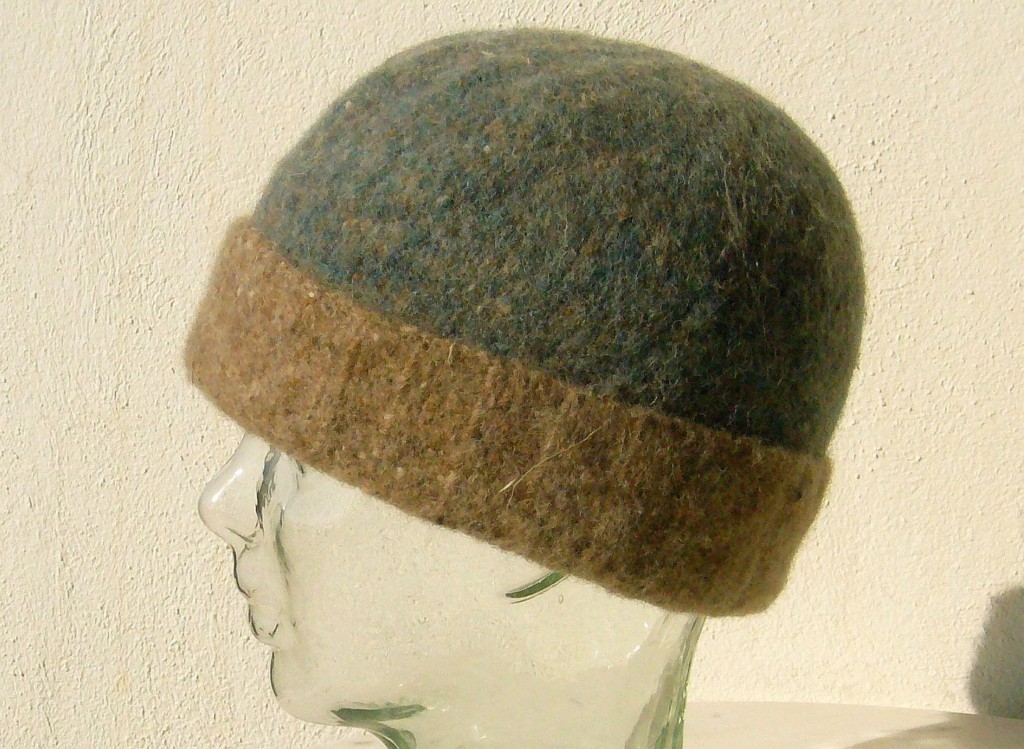 Would Otzi have liked this?

It’s likely that I’ll knit another hat for Otzi – there are so many exciting possibilities. 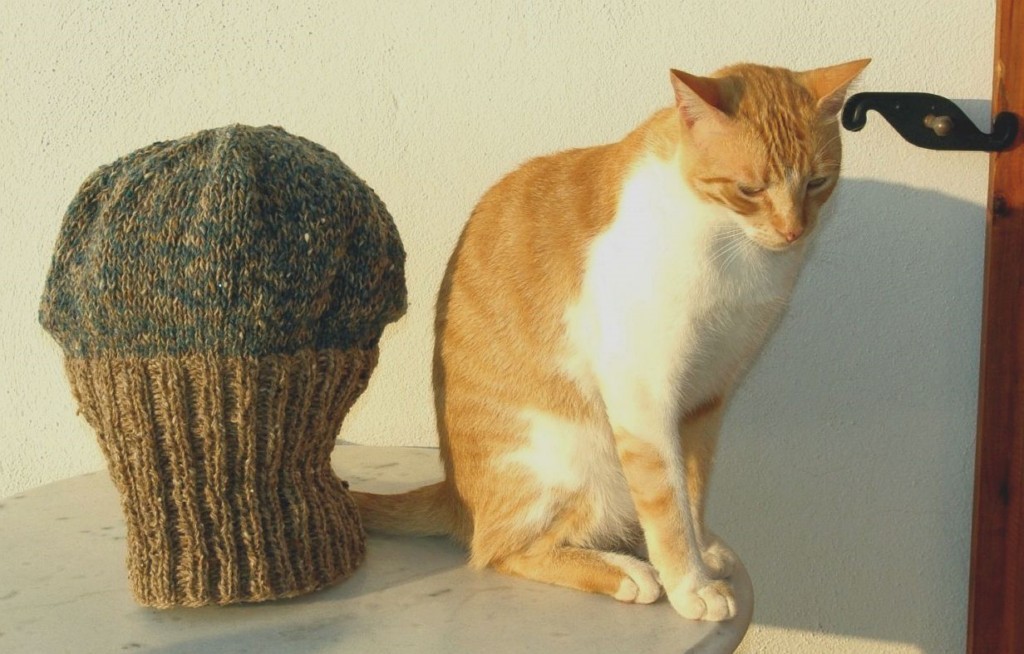 I have my own woollies, thank you