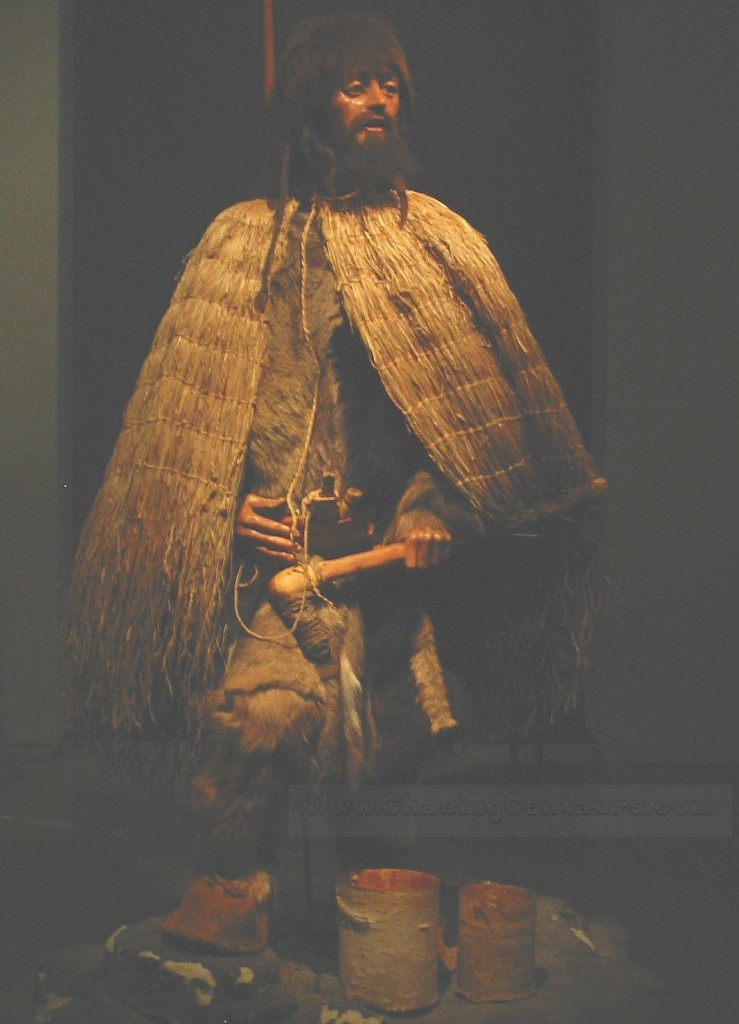 Otzi, the Iceman, first came to my attention in September 1991 as I sat at our kitchen table in Austin, perusing the New York Times. Enthralled doesn’t begin to describe my reaction as I read the article about the discovery of a mummy, more than 5,000 years old, frozen in the ice of Southern Tyrol, close to the border between Italy and Austria. “One day, “I announced to my husband, “ we have to go and see this.”

Scientists the world over became involved with Otzi; the more he has been studied, the greater our knowledge and understanding of his life, and the period in which he lived. We know his age and what his ailments were. We know his occupation, his diet and what his last meal consisted of. We know how he died. We even know, through the wonder that is DNA, that there are male descendants of his living in the area! The importance of this find cannot be overstated, and for those interested there’s a wealth of information available – our good friend, Google, is a starting point.

What we will never know is the character of the man. No scientist can tell us this, though they were able finally to establish that he died of an arrow wound in his back. That is to say, he was killed by the intervention of another man, or men. I find it particularly poignant then that even in death he was wanted by others, for the politicians weighed in as the row over ownership of Otzi escalated. Was he found on the Italian or the Austrian side of the border? The implications of this are significant, and it was finally determined that he died in what is now Italy.

My fascination with Otzi increased with each new discovery relating to this extraordinary find. Bodies encased in ice masses are revealed occasionally in the Alps, particularly in recent years as a result of the melting of some glaciers, but these deaths are comparatively recent and due to avalanche, skiing or hiking accidents. The identities of the unfortunates buried in this manner are usually established very quickly, but Otzi is in a league of his own.

People’s lives take on turns and twists. Some years ago so did ours, and my husband’s work took us to Austria for a number of years. I almost swooned when we realised that we could drive down to Bolzano, Italy, across the Alps in roughly four hours. I’m not going to dwell on the anticipation, or the excitement here, other than to say that I am still awed by Otzi. Three times have we visited him; my husband delights in commenting that his wife is in love with an older man.

The museum has mounted an excellent exhibition of Otzi, complete with a lifesize model of how he would have been dressed in life, and reconstructions of his clothing and equipment. His garments were found in a poor state, and frankly I think it a marvel that they survived at all. The clothing in itself was a significant discovery as it became clear to scientists that artisans worked at what one might call the clothing trade.

Otzi’s garb was not crudely fashioned, he wasn’t roughly clad in skins, but in fairly sophisticated garments of specific purpose, made by others. Given the skill sets and tools of their time, the Neolithic tailors were accomplished at their trade.

His cap, in particular, caught my attention, fashioned as it is from small pieces of bear skin. I assume that fur remnants were reserved for such items as it is unlikely that whole skins would be cut up for this purpose, given their value as larger pieces of clothing and as bed coverings. It’s also quite probable that skins and furs were recycled from damaged pieces which were no longer of practical use.

Acquiring and preparing animal hides and pelts could not have been easy; such valuable materials would have been repurposed. It’s worth noting that bear skin, with its thick layer of fur, was almost certainly the warmest material available to the mountain people of this period.

Caps and hats need to fit the head quite closely, particularly if required for warmth, whatever they are made of. The hatmakers of Otzi’s time shaped his headgear, patchwork fashion, into a crude bowl shape, thus ensuring maximum warmth. Two leather strips were attached to his cap, both of which were torn and knotted before his death.

Vicious winds whip wildly through those mountains, and it might well have been difficult for Otzi to keep the hat tied securely on his head. Poor Otzi. A knitted hat, worn as a helmet liner perhaps, would have made his life a little easier, allowing as it does a snug and elastic fit.

We learn and continue to learn from Otzi, more than 5,000 years old, whose needs and aspirations were much like ours. My husband refers to him as the victim of a hostile corporate takeover.

This entry was posted in Uncategorized. Bookmark the permalink.