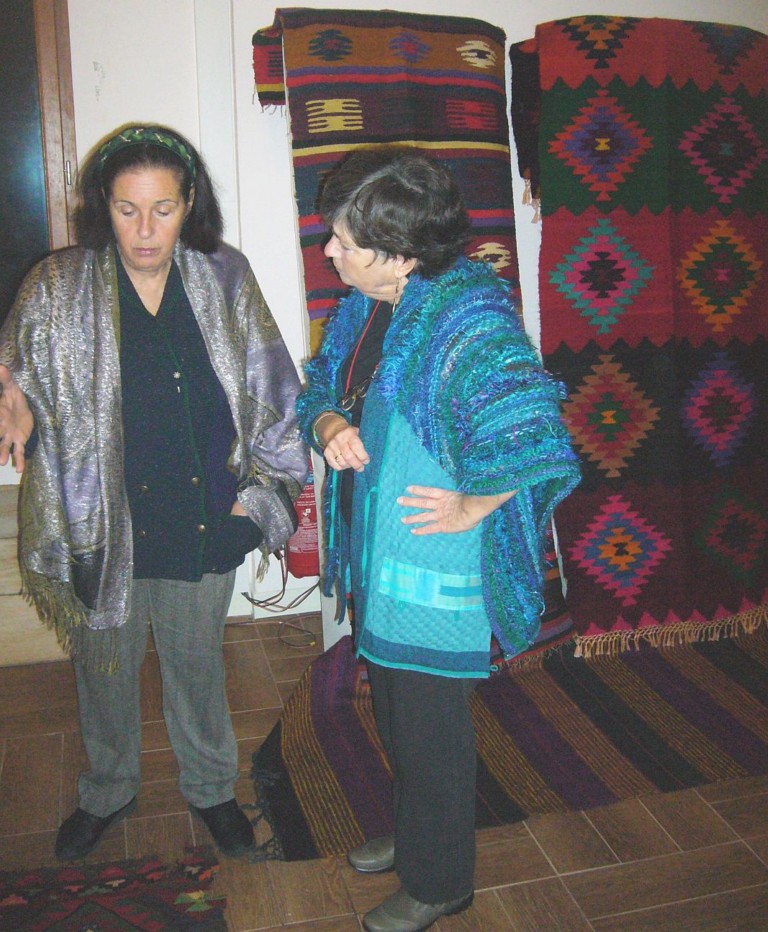 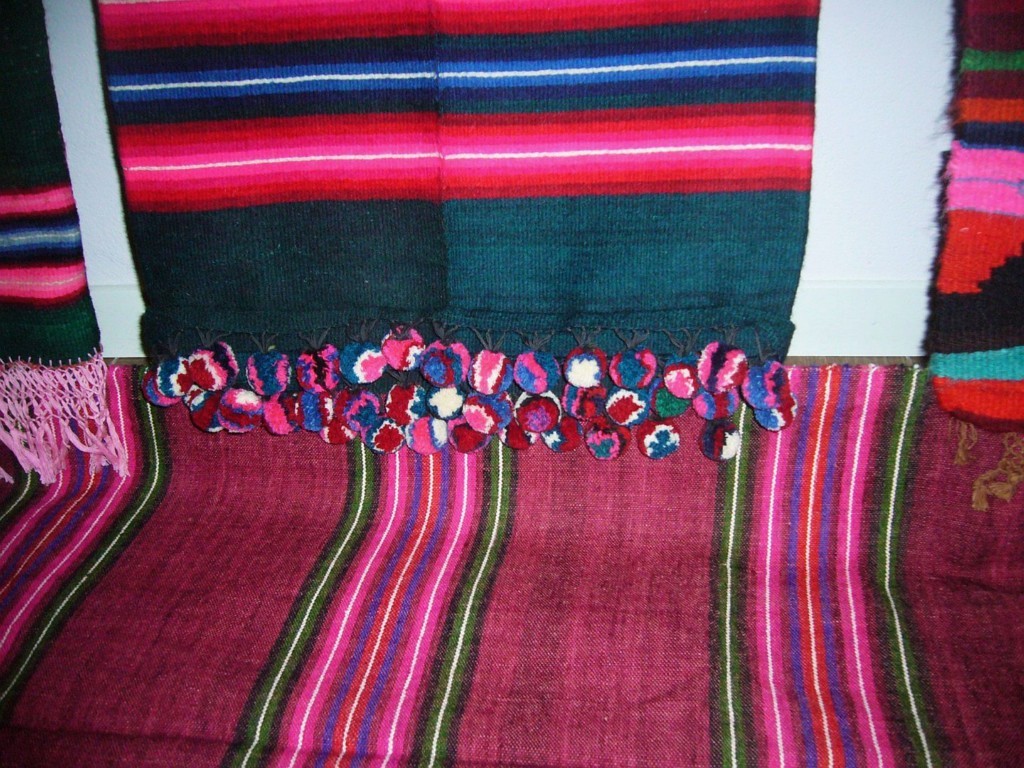 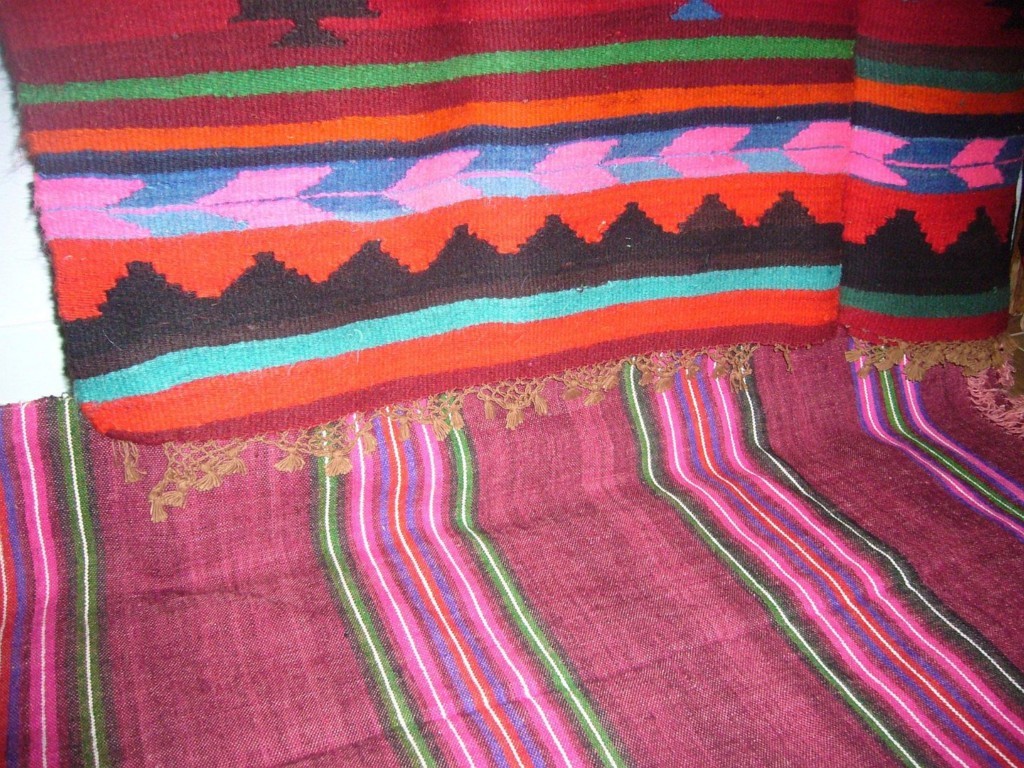 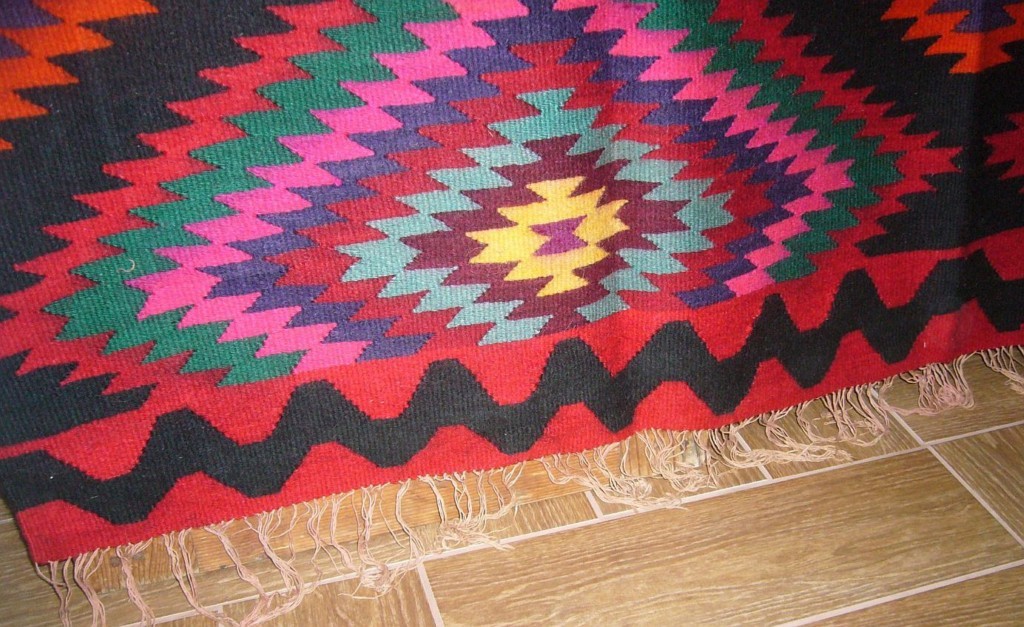 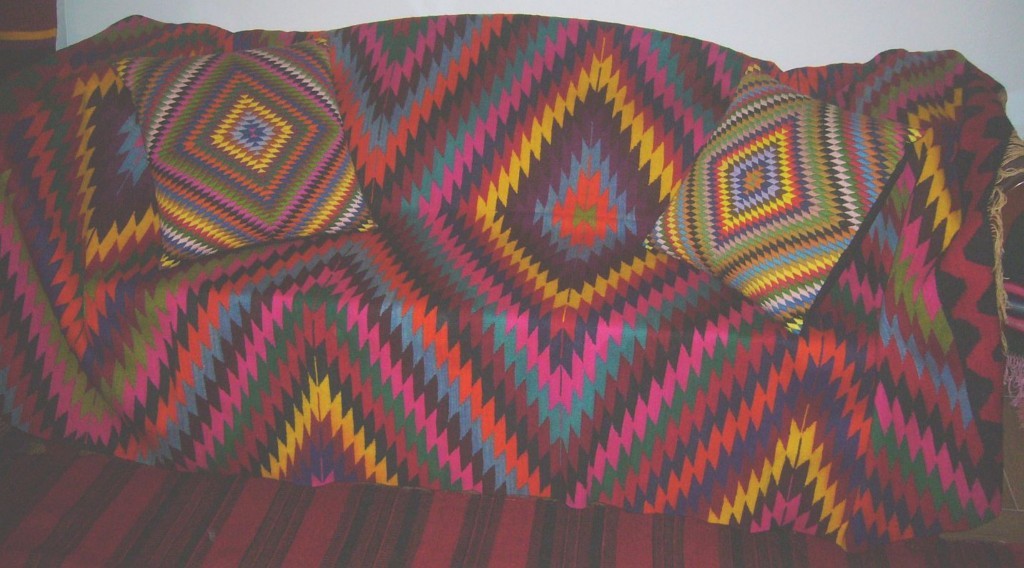 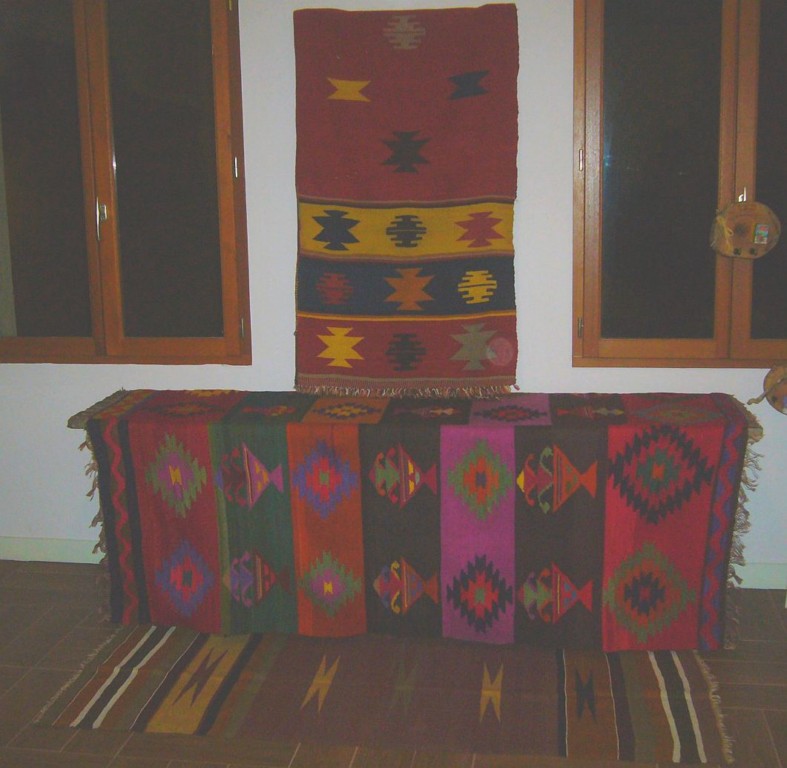 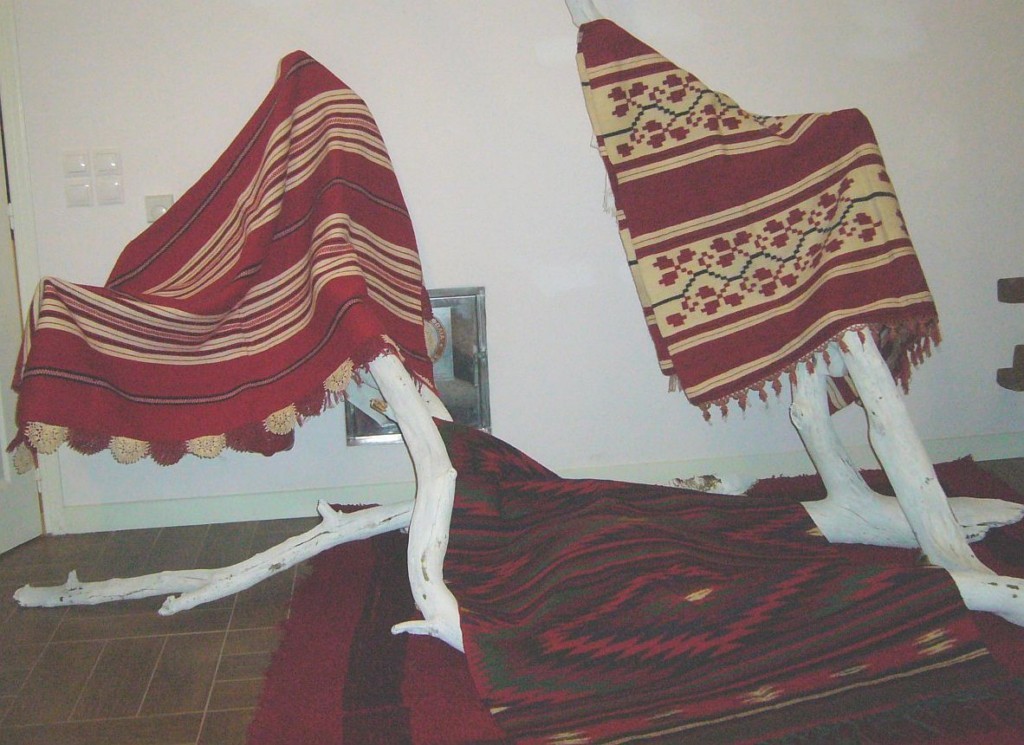 The natural materials here – wood and wool – make for an arresting arrangement. The rug on the right is completed with a fairly typical knotted edging, but the one on the left is the only example I have seen of this very unusual crocheted motif edge treatment. It’s quite striking, employing as it does a different form of textile artistry and skill. I’d like to find out more about this particular rug and whether it had one maker or was it a collaboration? The ability to combine all manner of stitching and of textiles, into a coherent whole is one of the enduring appeals of the needlearts. 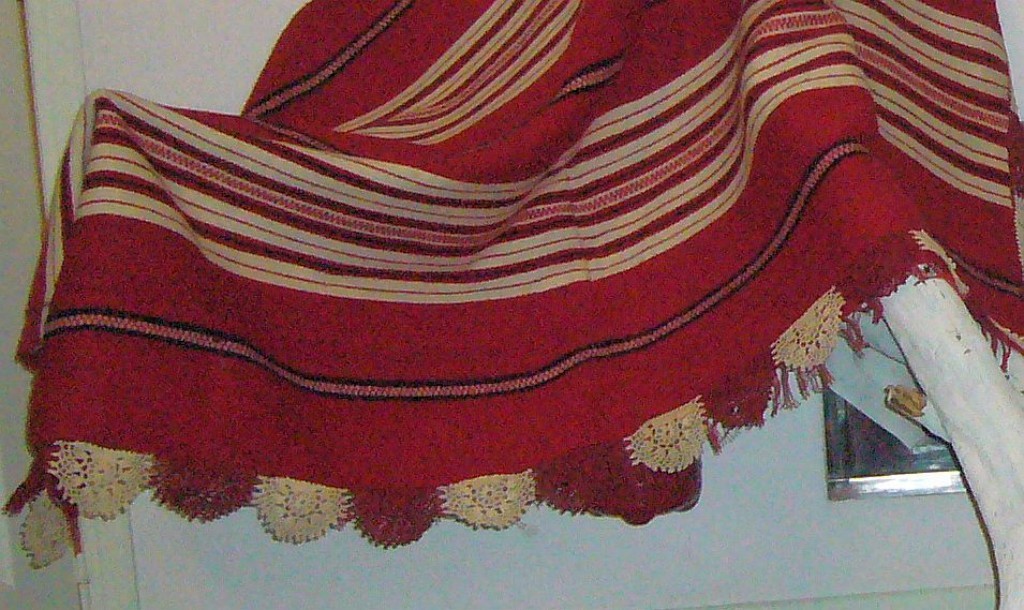 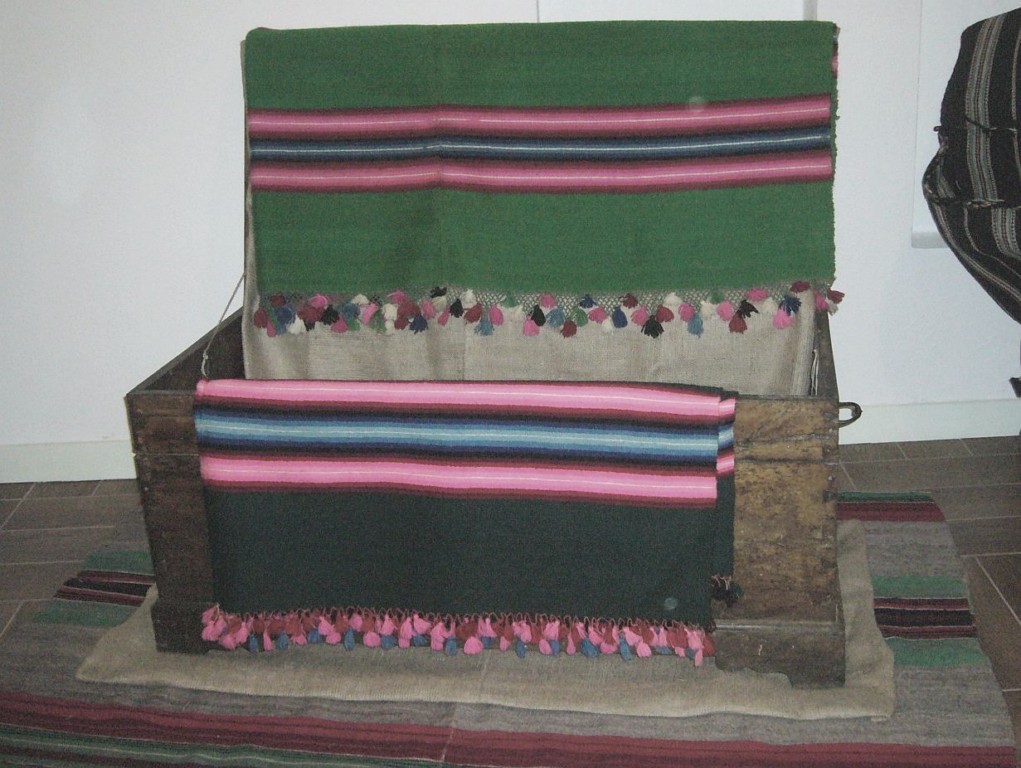 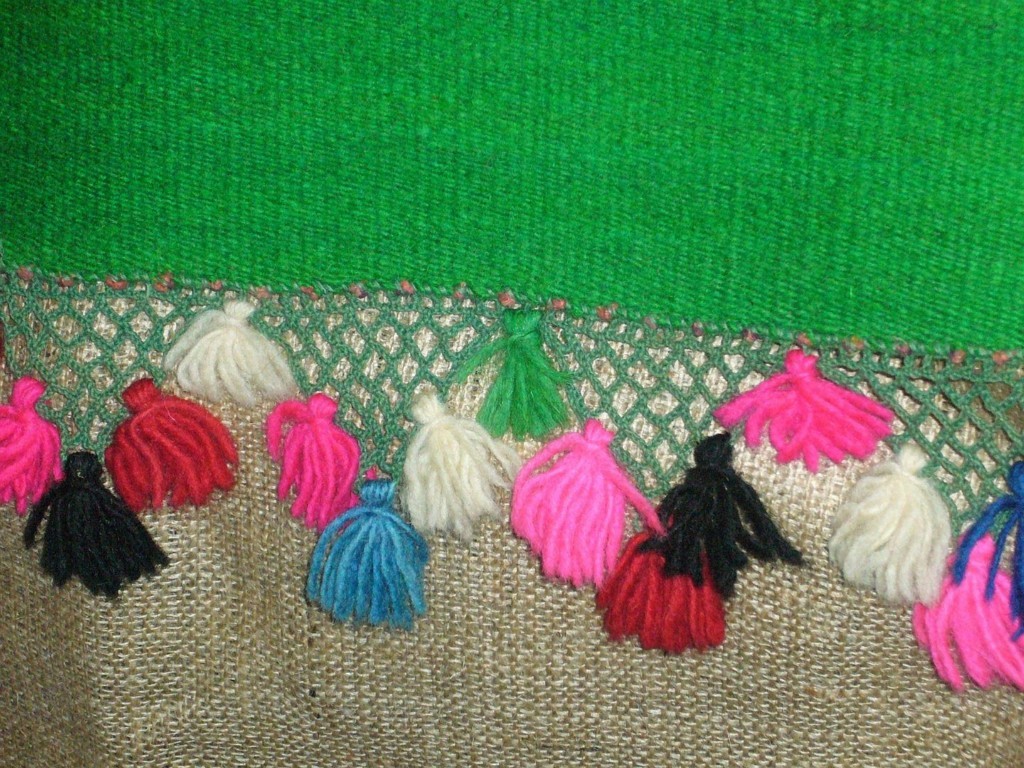 These kilims are draped to advantage over hessian, on an old handmade chest, in which they were probably stored. The forests of the Pelion, though now much reduced in size by the inevitable encroachment of the centuries, still abound with hardwoods of many types from which some lovely antique pieces of furniture were fashioned. I believe this chest is made of chestnut; note the handcarved dovetail joints. 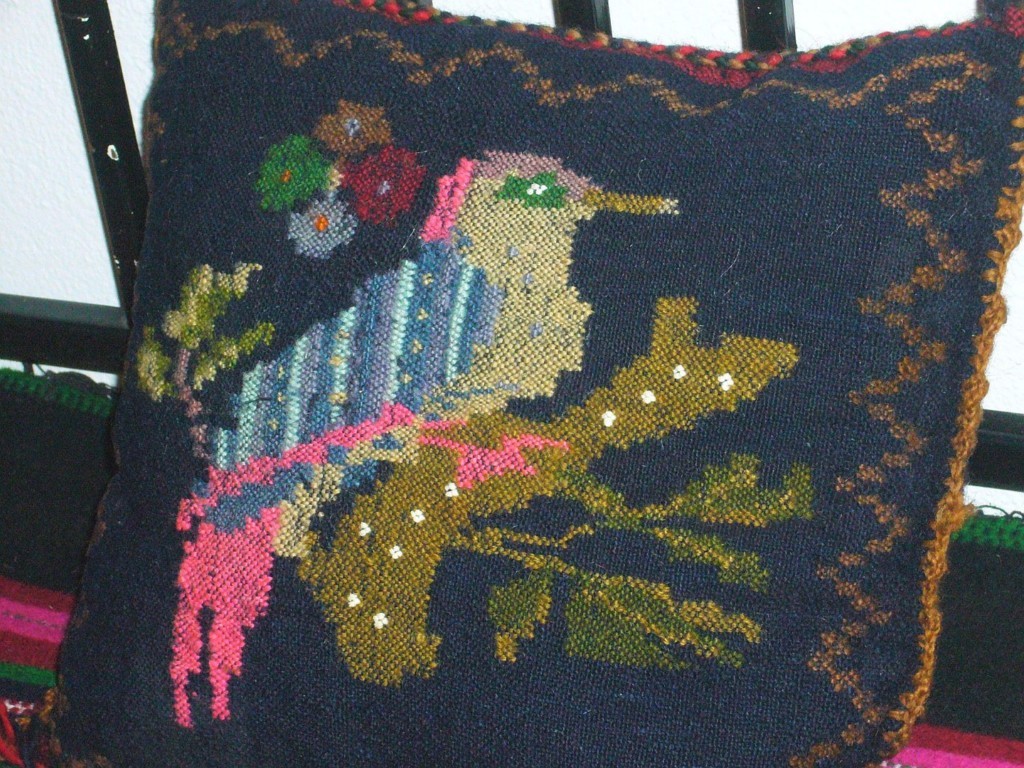 Note the crocheted and braided edgings to this woven cushion cover. 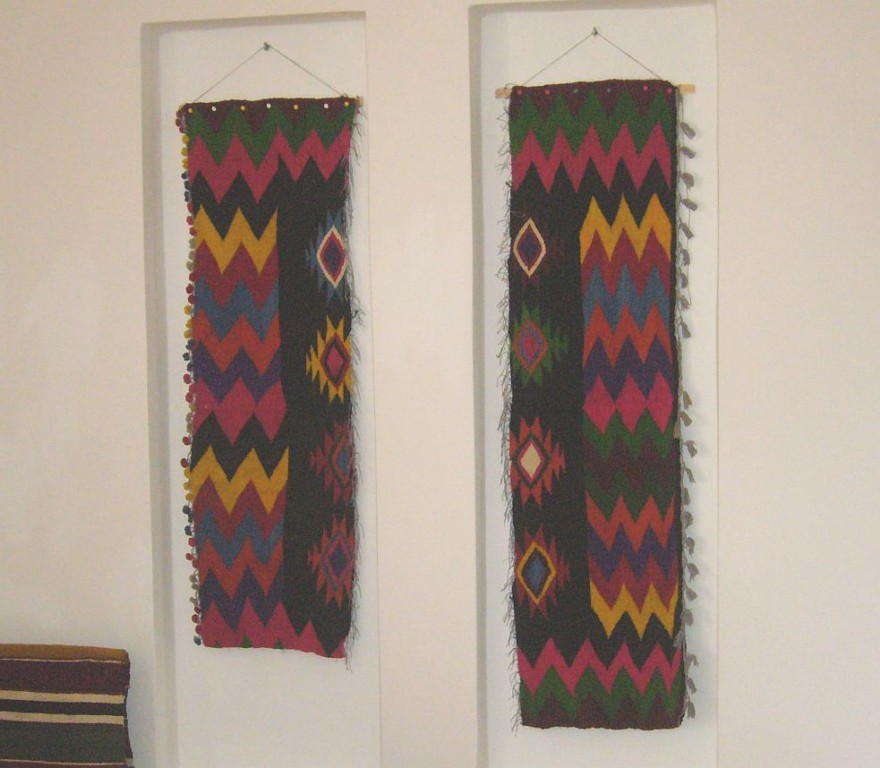 Part of the same kilim?

The owner has taken pains to preserve and display these damaged pieces which have the appearance of being part of a large carpet, and may indeed be, but given that one piece is edged with tassels, and the other with bobbles, I think they are in fact salvaged from two different kilims. 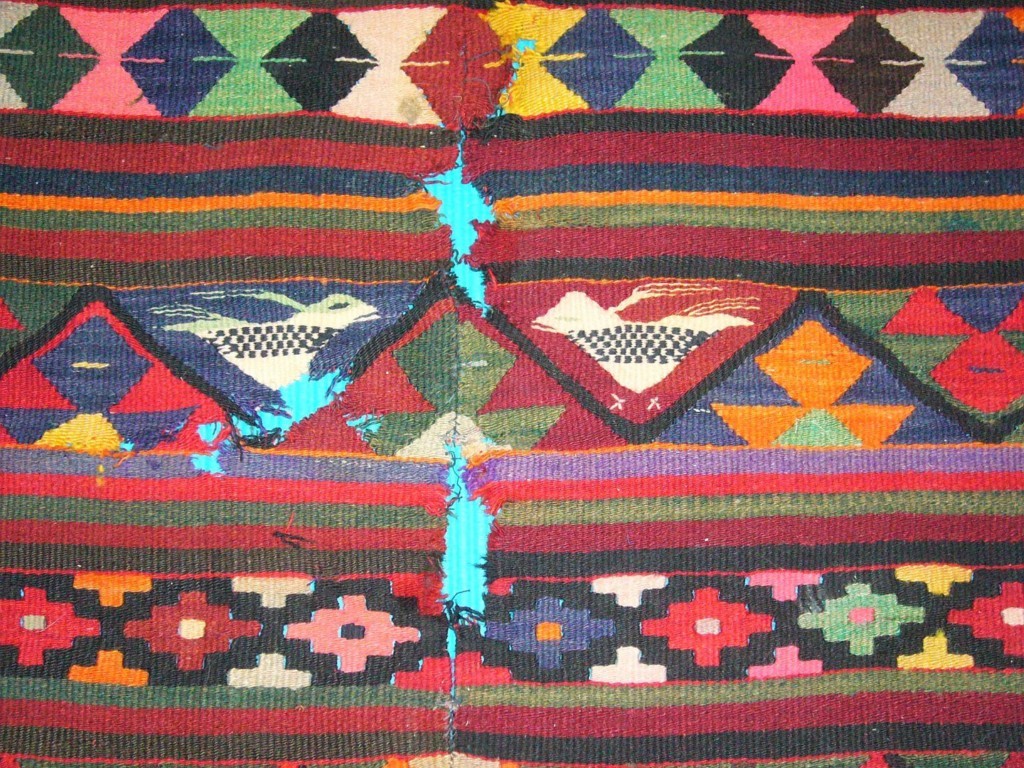 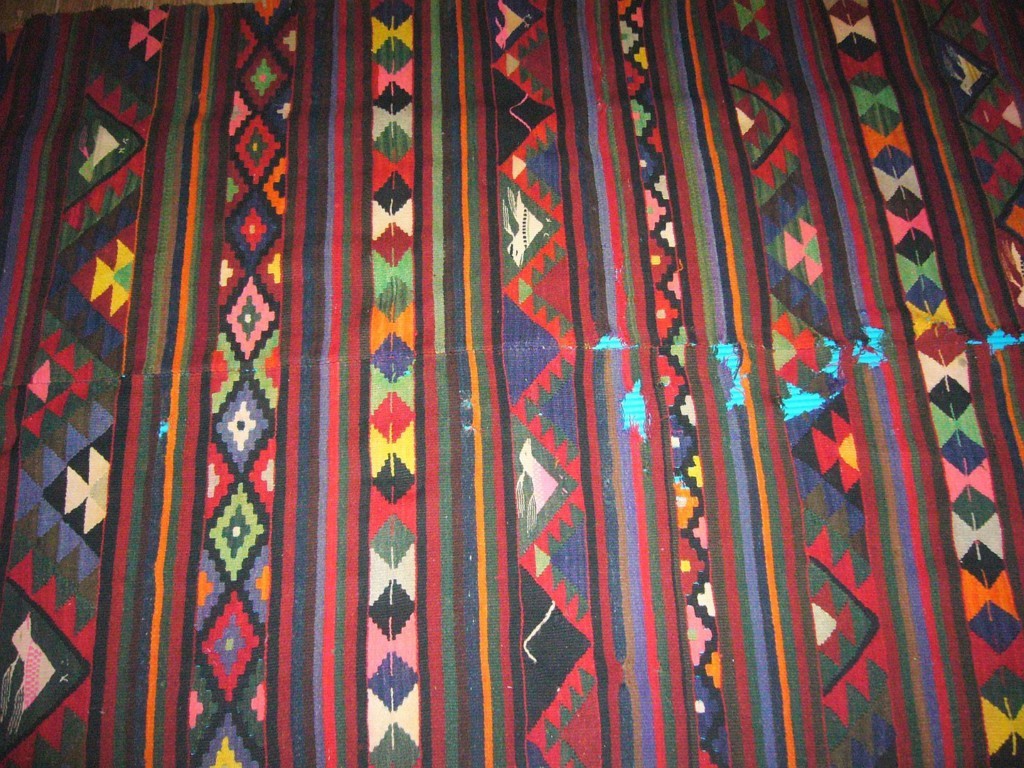 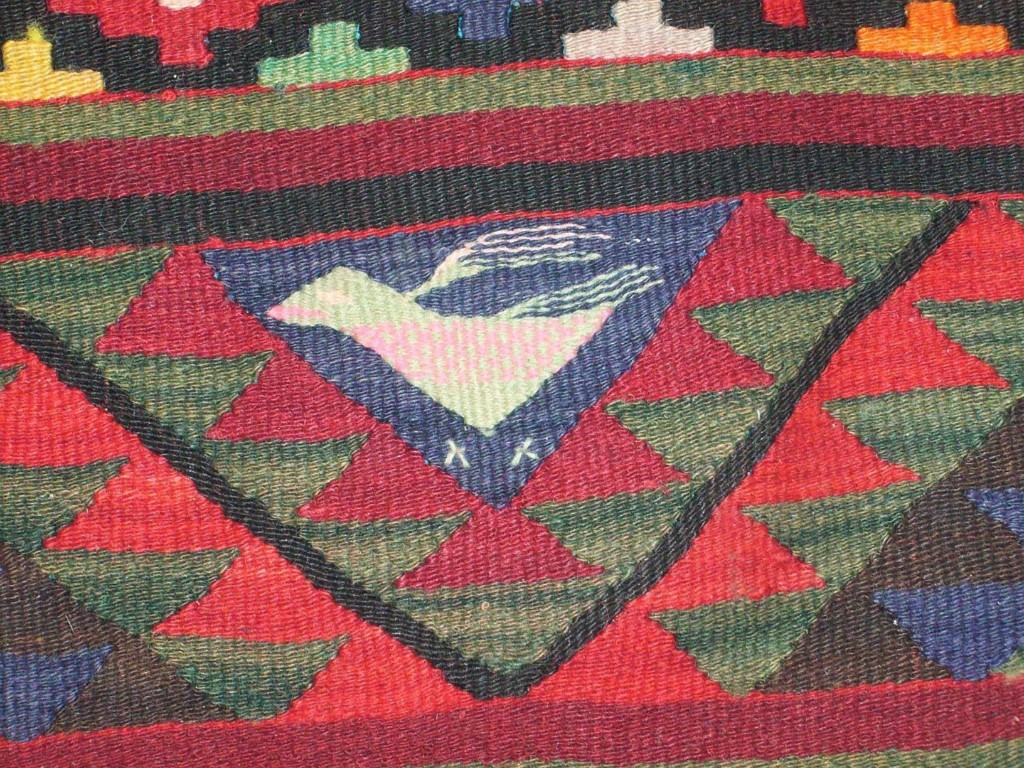 This beauty appears to have been damaged while stored; the blue areas are the underlay that was used to display it on. If you look closely, you will see that it was feasted upon precisely along the seam where the two pieces were carefully joined to create this large carpet. The precision with which the pieces were woven, so that the intricate pattern remained unbroken when they were seamed together, speaks to the meticulous work of the weaver. The damage suggests to me that it was folded on the seam line when it was put away, and makes the case that textiles in storage be examined frequently to inspect for unwanted guests munching away. 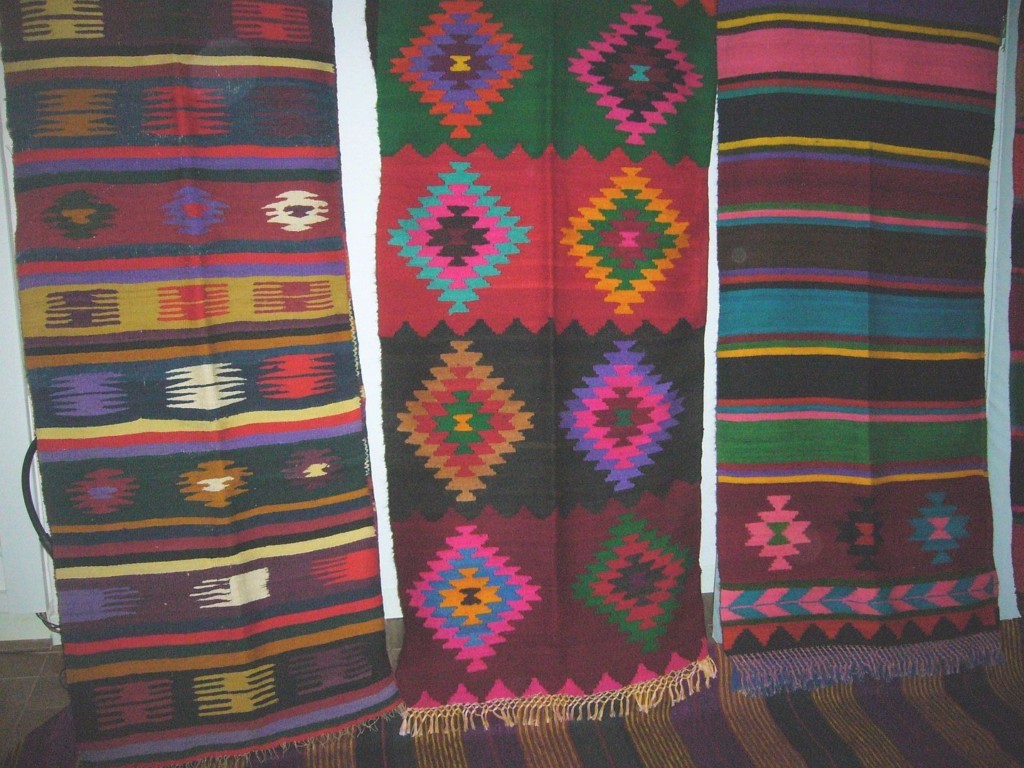 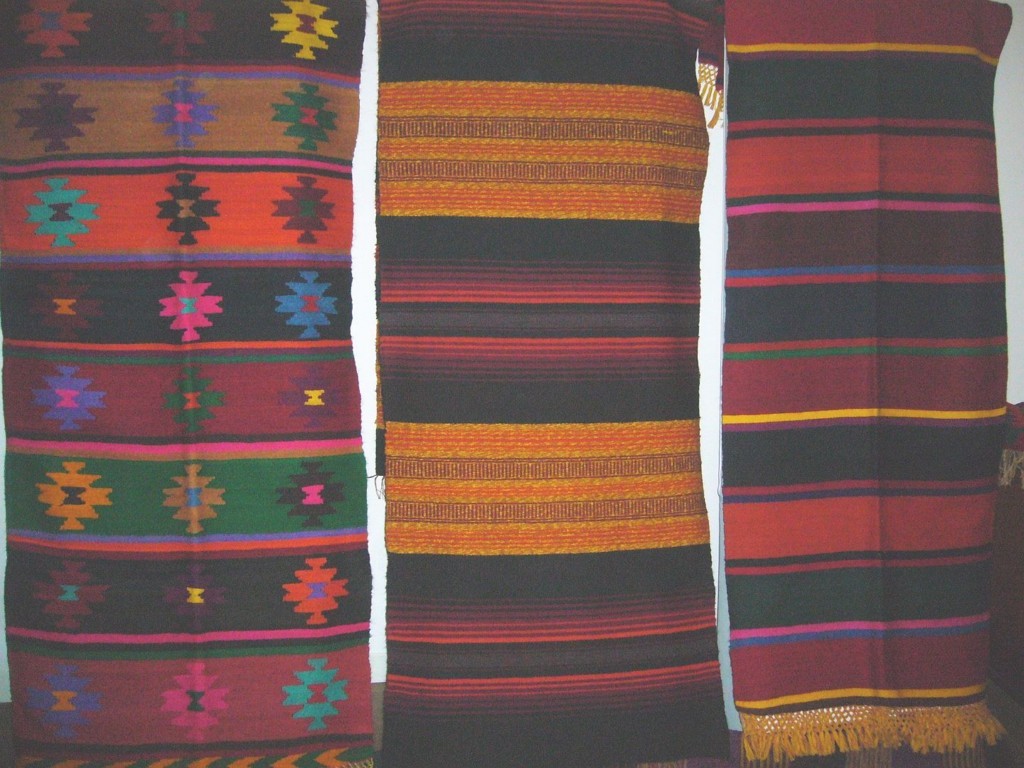 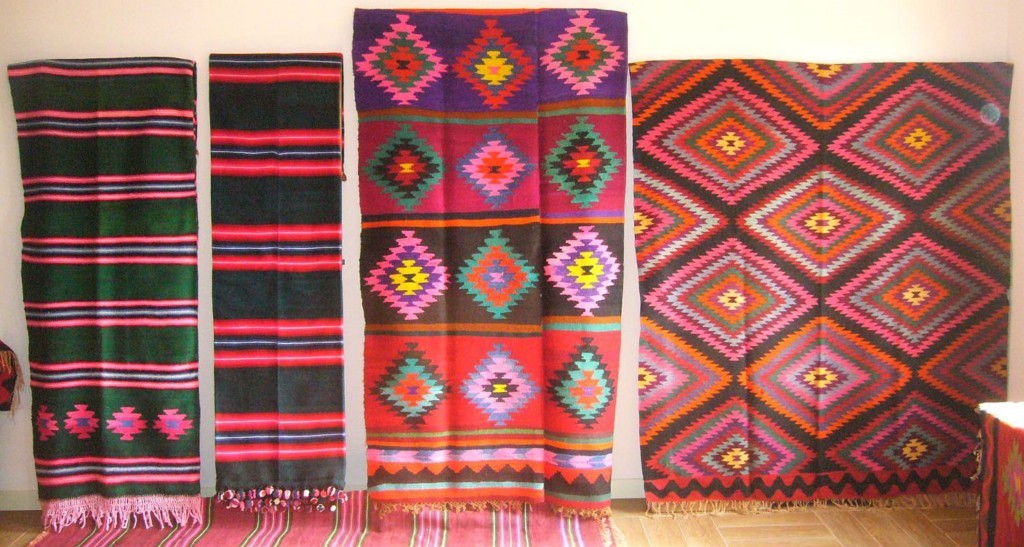 Lafkos is a small village, well off the beaten track, so unfortunately this exhibition hasn’t received anything like the attention it deserves, but the exhibitors I had the privilege of speaking with expressed the desire to showcase more of their textile treasures in the future. Yes please!
This entry was posted in Uncategorized and tagged handcarved, handwoven, kilims, Lafkos, Lagou Raxi Country Hotel, Pagasitic, Pelion Peninsula. Bookmark the permalink.

One response to “HANDWOVEN HEIRLOOMS”