“LET’S JUST HAVE A QUIET DAY…”

January 6th is an important feast day in the calendar of the Greek Orthodox church. It’s a public holiday, a day when friends and families gather after the religious ceremonies to celebrate. Restaurants and tavernas bustle with cheerful patrons, kids dash about. It’s winter here, so there’s good excuse to warm up with a glass or two of tsipouro, that drink for which this area is renowned.  And yes, if occasionally some over-enthusiastic reveller should imbibe more than good manners call for, it’s all taken in stride. Greeks are open hearted, friendly people who enjoy a social occasion, though goodness knows they have little to celebrate these days.

The day dawned with some cloud and enough sun to show promise of reasonably good weather, instead of the dreary chill that’s typical here in January.
“Would you like to go out?” Ron asked. “Shall we go see the cross being thrown in Milina?”
I debated. It’s interesting to watch the wild leaps off the waterfront into the icy Pagasitic by those who, to me at least, have a death wish as they seek to retrieve the cross. The restaurants would be open – a chance to have a meal for they are typically closed in the depth of winter.
“Nah,” I replied after a bit of thought, “let’s just have a quiet day.”

Ron wandered off to chat to some fishermen down on the rocks.
“They’ve managed to catch an octopus,” he told me when he returned. “Not sure if they’ll have much more luck.”
I was at my computer, Raki on my lap, when the doorbell rang. We weren’t expecting anybody. Removing the protesting Raki, I went to answer it. A rather agitated man greeted me and explained that he had been fishing on the rocks. Thinking he wanted Ron, I invited him in.
“No, no,” he said, “it’s my brother. He’s hurt. I need to call a taxi.”
Confusion reigned for a few seconds, but I soon realized that his brother was seated on a low stone wall in the garden, surrounded by a pile of clothing and fishing gear. Calling out to Ron, I rushed over to investigate.

It appears that the injured man, the younger of the brothers, had fallen from a height onto the rocks, and that his brother had managed to carry him on his back up to the house. Quite a feat, let me tell you. 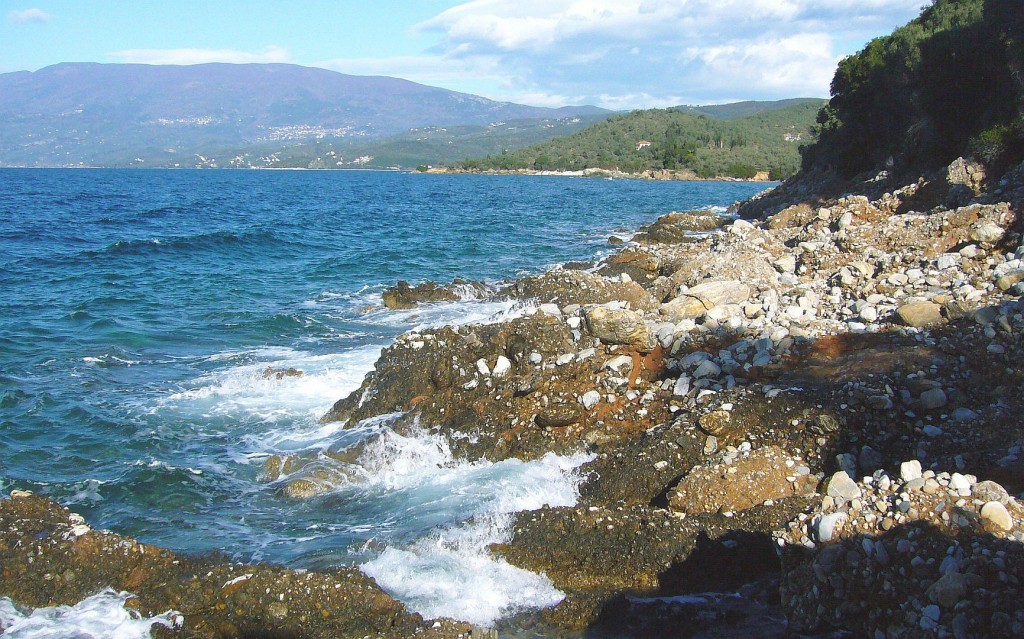 The poor chap was in considerable pain, unable to walk, clutching his arm and apologising profusely for the trouble he was causing. Hardly. I fetched a blanket to cover him, though he kept maintaining he wasn’t cold, and a large cushion to rest his clearly broken arm upon.

After a rapid conversation we established that the injured man had driven his car to a village some distance away, and that they had then walked along the shoreline. They are Albanian, speak very good Greek and insisted in speaking only Greek to each other as “It’s very impolite to speak in a language you don’t understand, kyria (madam),” they declared. I was very touched.

The older brother can’t drive, it turned out, but he assured me that if I’d only call a taxi to take them to their car, he’d manage to drive to medical help.
“Not a chance,” we said. “you have no licence. Only imagine the police! And anyway, we’ll drive you to the Health Centre in Argalasti.”
Then it struck me.
“Are you here legally?” I asked in some trepidation, for if they weren’t, it would be unwise to take them to a hospital for fear of the medical staff being constrained to inform the authorities.
“Yes, yes,” they assured us, “we’re here 20 years and have all our papers.”
Phew. I’d already been running the names of doctors we know through my mind, planning to ask for help, knowing that the Hippocratic oath would be honoured and few questions asked.

I called our beloved Costa to inform him of the situation and see if he was nearby. He was and arrived at a run a few minutes later to engage in anxious conversation with the brothers. I insisted they speak Albanian while we debated our options. Older brother asked if we could give injured brother (I confess their names escaped me in the confusion) some water, but I explained I was reluctant to do so, or give an aspirin, lest surgery be required. At this point older brother delved into his bag and produced the unfortunate aforementioned octopus which he tried to press upon me.
“No, no! Thank you very much, but no!” I responded as politely as I could, though I confess I’d recoiled; Costa later told me that my face was a picture.

We prepared to drive to Argalasti. The back of the Suzuki was loaded up with their kit, Costa insisting on going along, and managing the operation like a field marshall, while I fetched my cell ‘phone and locked Raki in the house.  We got the patient into the car with some difficulty. He couldn’t walk, and was in severe pain, not to mention badly shocked.
“Don’t bother to get your ‘phone,” I told Ron, “we’re only going to the Health Centre so we don’t need two ‘phones.”

We made slow progress through the rough, muddy roads until we reached the tarred road, Ron driving as carefully as he could to avoid jolting the injured man. He, poor dear, was an interesting shade of green, clutching tightly on to the plastic bags I’d brought along in case of need. But he didn’t require them. Wedged tightly between his brother and the door with his eyes closed, he spoke only when I’d enquire how he was doing.

Costa kept up an excited stream of chatter in Albanian all the while, pausing briefly now and then to pass on some bit of info to me, in Greek.
“They’re from the north of Albania; they’re not from my region; they were young when they came to Greece; they have good jobs; they are married; they have children; they love fishing; he (the injured one) usually fishes alone; thank goodness his brother was with him today.” Yes, indeed.

We finally made it to the Health Centre in Argalasti, where I was relieved to notice an ambulance parked; often it happens that no ambulance is available. I knew that the injured man would need to go to the Volos hospital, as there’s no X-ray machine in Argalasti, which is not much more now in the present economic situation than a triage centre, a field hospital really. And jolly good it is too, with excellent staff exhibiting a degree of care and concern that cannot be faulted.

I went in to explain, and immediately a young doctor came out with a wheelchair to take our patient into a treatment room. It wasn’t long before I was told that the ankle was broken, and possibly also the tibia, not to mention multiple fractures of the left arm (the miracle was that he didn’t land on his head) and yes, he needed to go to Volos. As well, Ron and I told each other, that the ambulance was there. Ah, yes, the ambulance…actually, we were informed, there was no driver available. Oh boy. We stood gazing at the fanciful representation of Chiron,  exceptional centaur and healer who lived on Mt Pelion, while we discussed the situation. 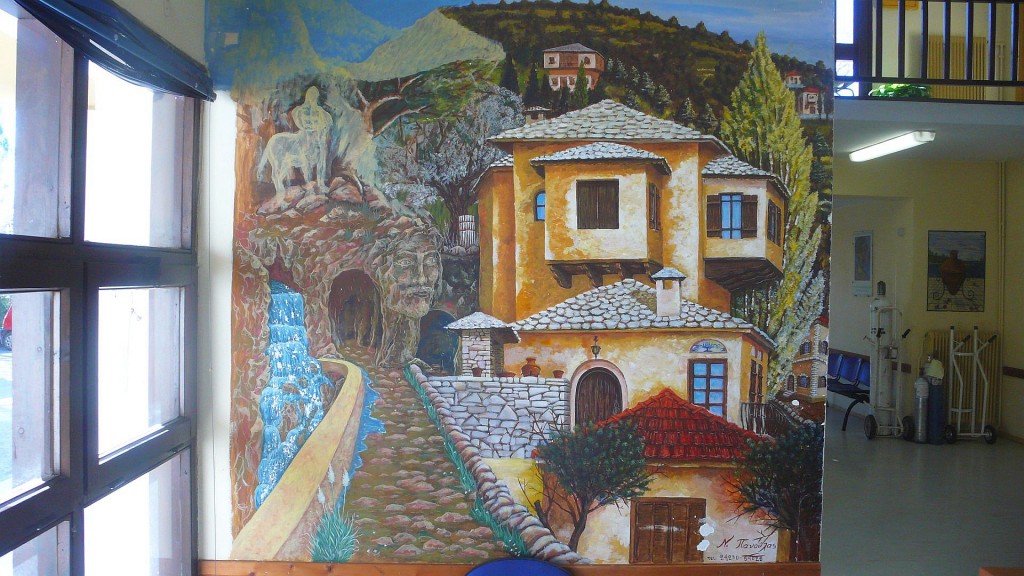 “Look,” Ron said, “we hadn’t planned on going anywhere. I’ll pay for a taxi, and we can go home.”
Costa was rather disappointed that he wouldn’t be going to Volos; no point in a second taxi fare. Easier said than done though. Epiphany, remember? No taxi available. In the midst of the decision making, my cell phone rang.
“Where are you?” queried my friend Loula. “I keep calling the house and you don’t reply.”
“I’m at the Health Centre,” I responded just as the ‘phone let out an ear splitting sound, and went dead. I mean dead. Not run-out-of battery dead, but dead. Finished. No more. Kaput. Completely, and for ever. Dang!

“OK, we’ll take him into Volos,” Ron told the assembly and went off to bring the car round to the entrance. We all piled back in; reality struck. Ordinarily a trip to Volos would entail some shopping. Not today. Nothing open but eating places. Sure, we could take our new friends to the hospital, and the three of us could have a meal. With me dressed as I was? Fat chance! I’d left the house in ancient baggy pants, T-shirt and distressed sweater, odd socks on feet thrust into elderly clogs – I resembled a survivor of a shipwreck.

“Give me your ‘phone, “ I said to Ron as we drove along, our patient fortunately dozing as a result of the painkiller injections he’d received.
“I’d better call Loula and explain. She’ll be very alarmed that we were at the Health Centre.”
“I didn’t bring it.” he replied, “Remember?”
“Here,” offered Costa, “use mine.”
I took it, and called Loula at home. No reply. Then I remembered she’d be out. I also realised I simply couldn’t remember her mobile number, and that the number was on my defunct ‘phone. Oy vey.

The trip to Volos hospital took some 40 mins; happy crowds milled about in the coastal eateries, and around the hospital. We pulled up to the emergency entrance 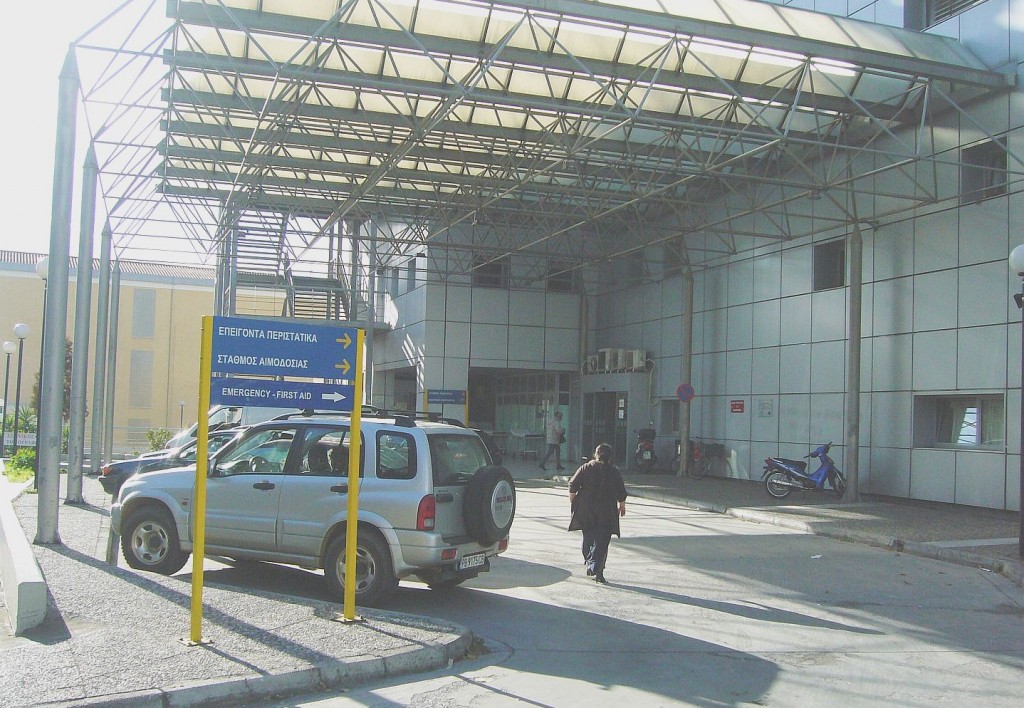 where Ron dropped our little group while he drove off to find a parking place. We walked in to the crowded emergency area where the patient was immediately taken through for treatment, Costa accompanying him. I remained while his brother gave the necessary details to the receptionist. It took no time at all before he and I could join the others. Our patient had already been whisked off to X-ray. There was nothing more for Costa and me to do but exchange telephone numbers with big brother, and insist that no, I wasn’t going to take the money he offered for petrol, and nor was Costa going to accept any for the time he’d lost from his day labour. 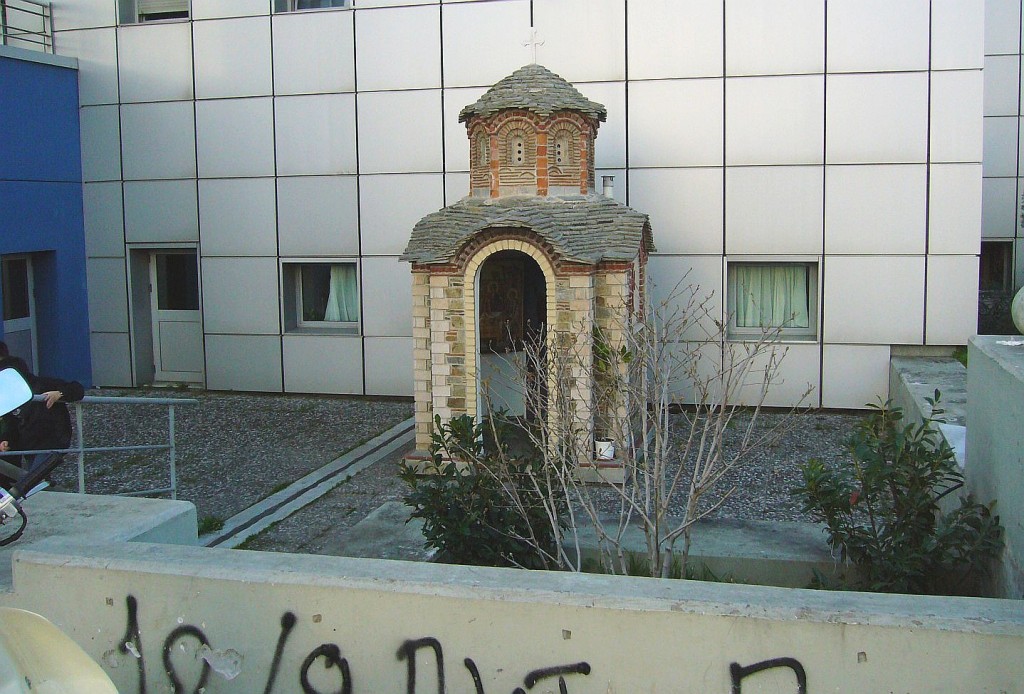 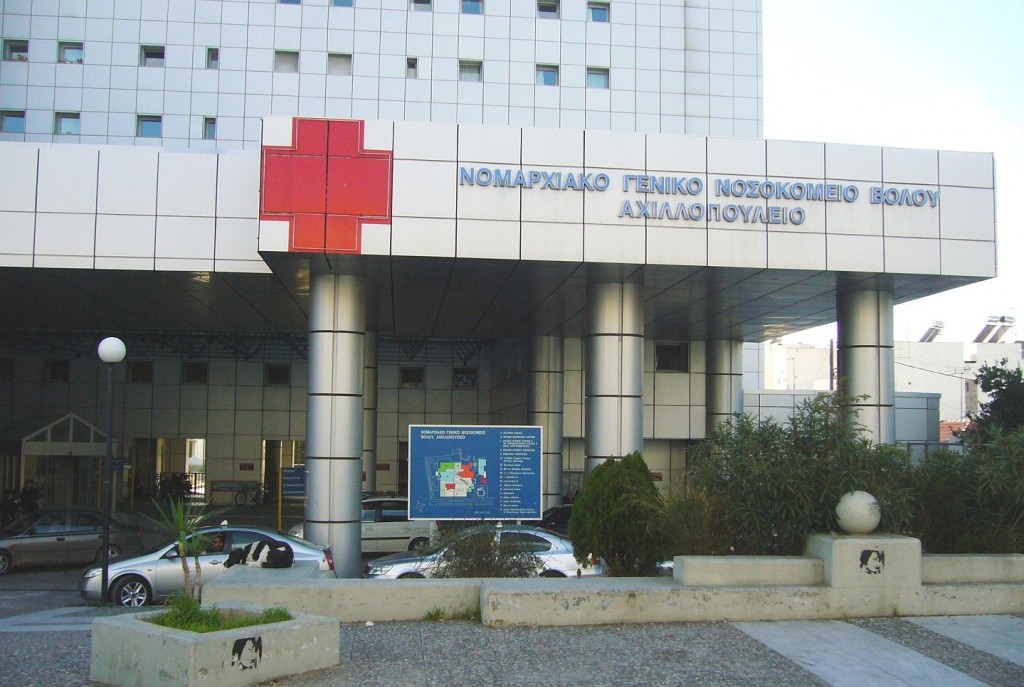 It was mid-afternoon before we finally got back home. What a relief to rustle up a sandwich and make a strong cup of tea after a day of broken bones, broken ‘phones. Big brother called later to bring us up to date. Little brother had been admitted to the hospital, with multiple fractures confirmed and surgery scheduled for the next morning.

Oh, I almost forgot: It was my birthday.