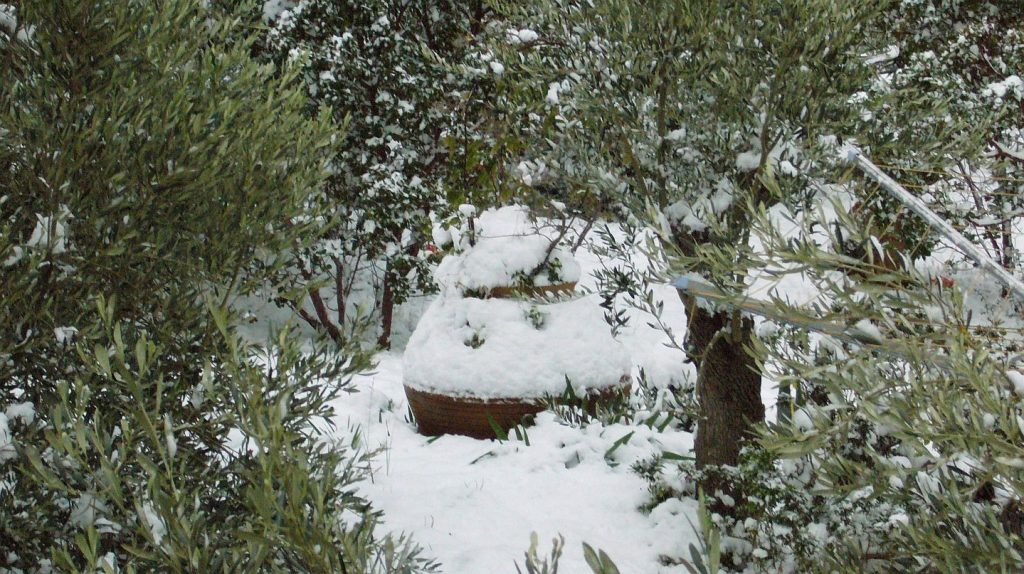 This winter was a pretty bad one. Worst in living memory is what folks have said about it. Winter here is a season I usually enjoy though most people don’t, and I can see why. For sun lovers it doesn’t get a whole lot better than Greece with her typically placid summers, long and hot. Dependably so. 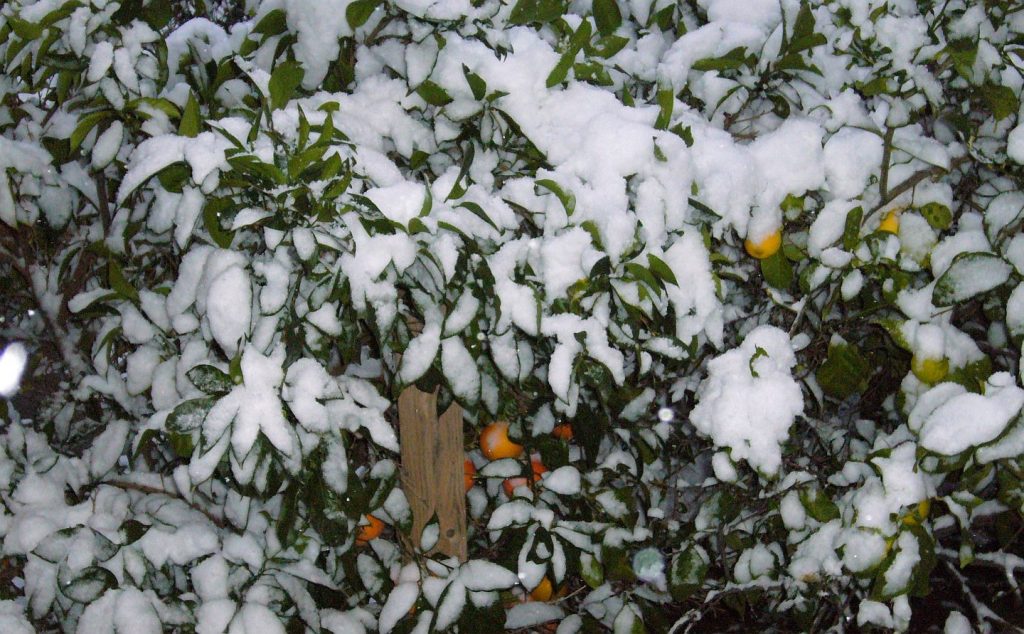 Once in a while the gods get angered and tempers fray up there on Mt Olympus. Zeus hurls a few thunderbolts about, Aeolos pitches his winds into the mix, and between them they might fling some rain around. 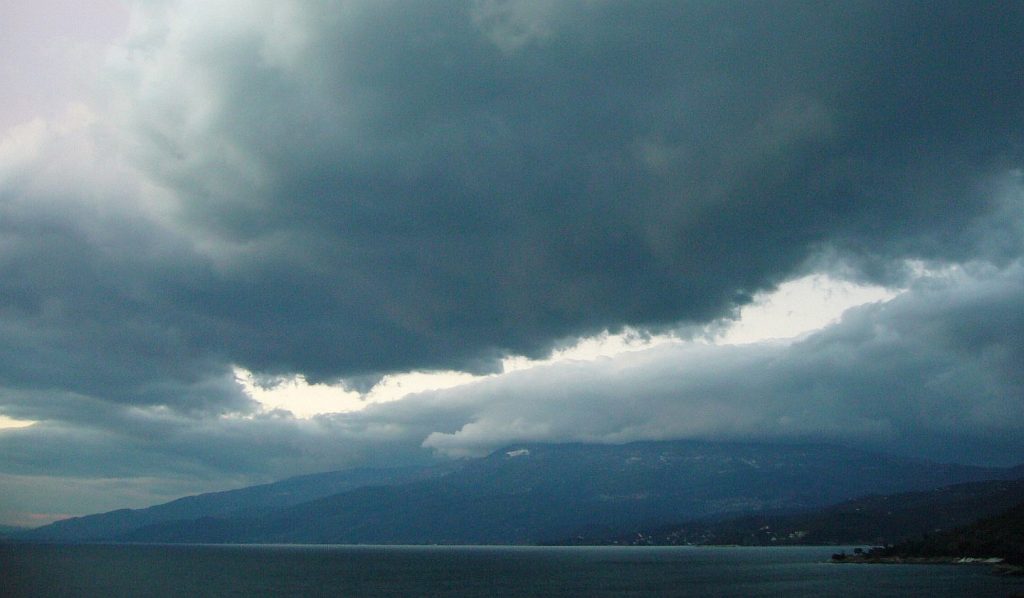 It’s usually all over in a flash, sometimes several flashes, but it doesn’t last long and it doesn’t happen often during the summer. 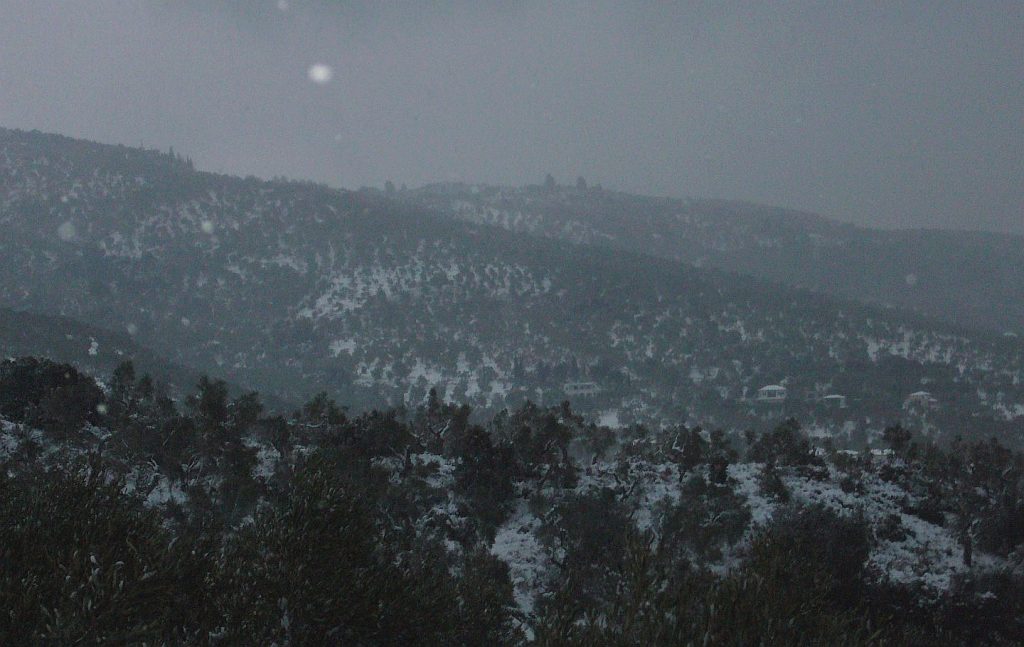 This winter nearly did me in. The sun pulled a vanishing act. It simply up and left. Perhaps Helios felt slighted that Chione, temperamental goddess of snow was getting too much attention and so he went into a prolonged sulk. Whatever. We missed him. We’d arise to damply dismal days, with fog so thick that frequently we couldn’t see much of the Pagasitic at all. 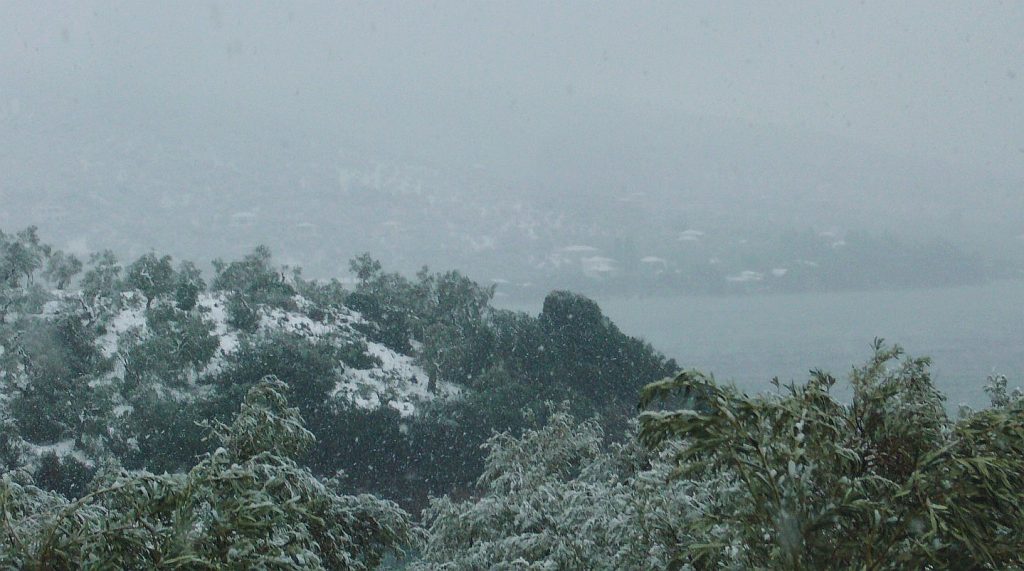 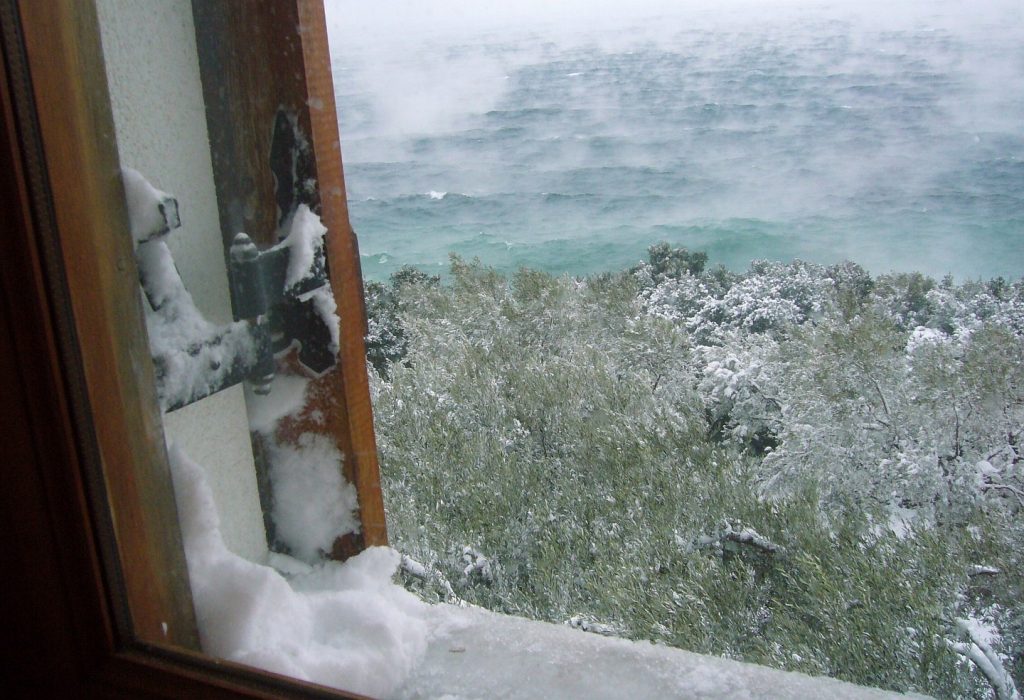 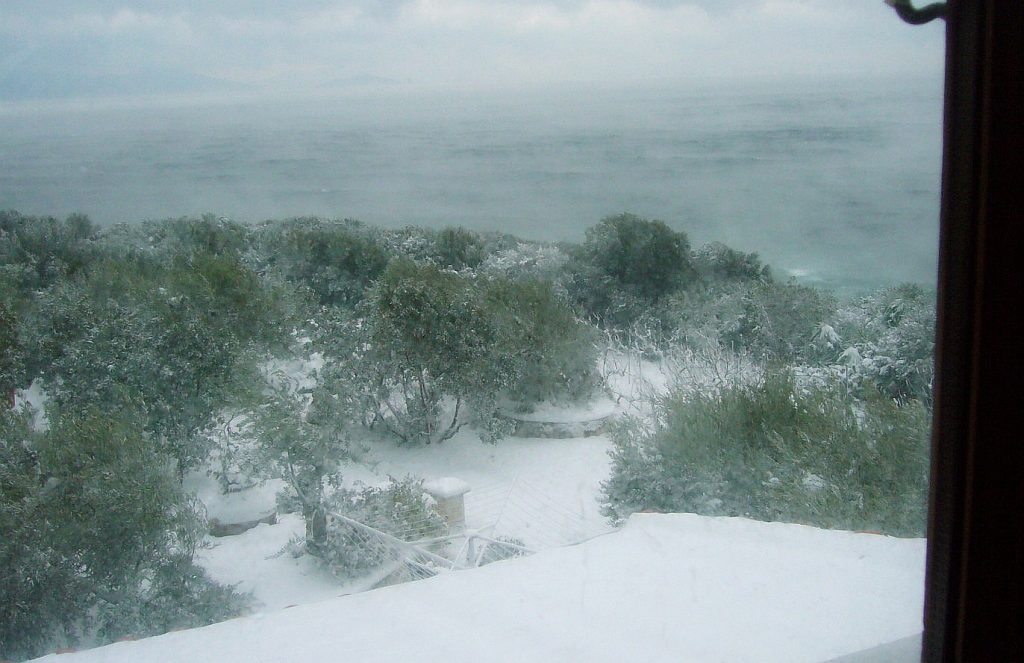 For the first time in my life I was affected by the lack of light, and began to understand what Ron means when he refers to the cabin fever of Alaska. Peering through the gloom at the distorted outlines of familiar shapes among the olive groves I could almost imagine that I caught glimpses of centaurs chasing about. 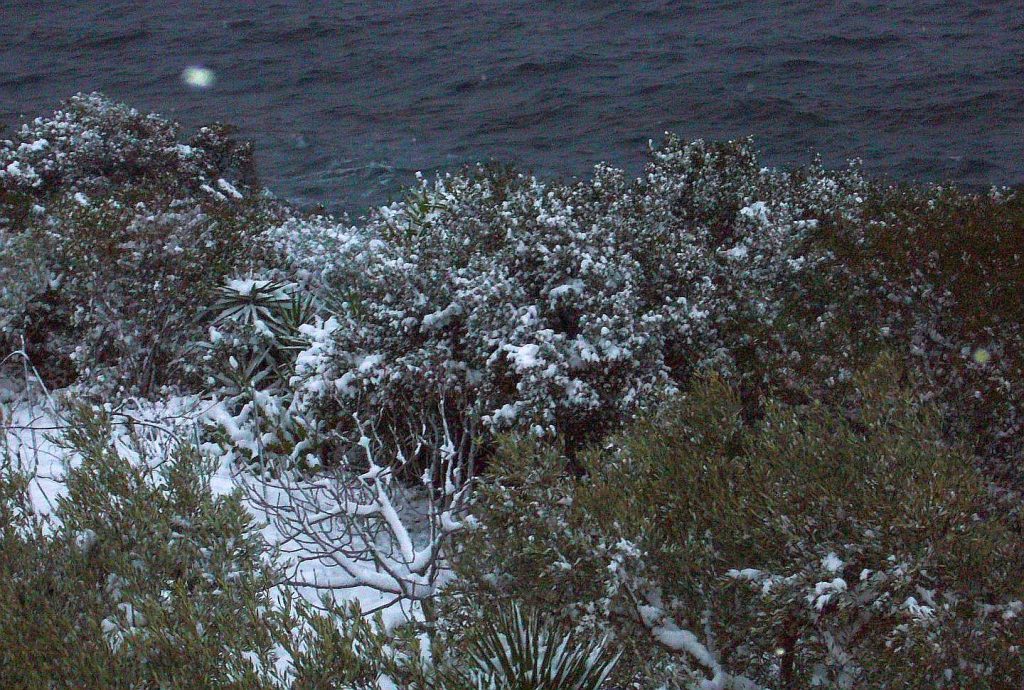 We’d been away so long last year that one of the storerooms wasn’t opened up until we’d come back and needed a few items. An awful smell greeted me as I unlocked the door and found, to my horror, that some of the bits and pieces were pretty much covered in a black mold. Yecch! The worst affected were the baskets I’d put there when I went through a de-cluttering frenzy a couple of years ago. Housekeeping not being my strong suit, I’d decided then that I was tired of dusting them, and probably even more tired of extricating the cats from them.

The only way to attempt a rescue was to wash the mold off, but the weather was so wet and the sun so absent that drying them was going to be a problem. I placed the sorry-looking baskets in a spare room with a dehumidifier, which Ron had to empty constantly, until winter began its journey south and the sun started getting over its snit. Finally, after still grumbling and grousing its way through a few days, gracing us with only brief appearances, the sun recovered its good humor and beamed down brightly.

As soon as I was reasonably confident of weather reports predicting prolonged periods of sun I set the baskets out in the courtyard and got to work with the hose, spraying the mold off carefully. A gentle brushing with a very soft brush completed the task and although some of the woven grass has darkened a little in color, the baskets emerged none the worse for the experience. I’m much relieved for apart from the fact that I have a great appreciation of the handmade, several of my baskets are quite old and are filled with memories. 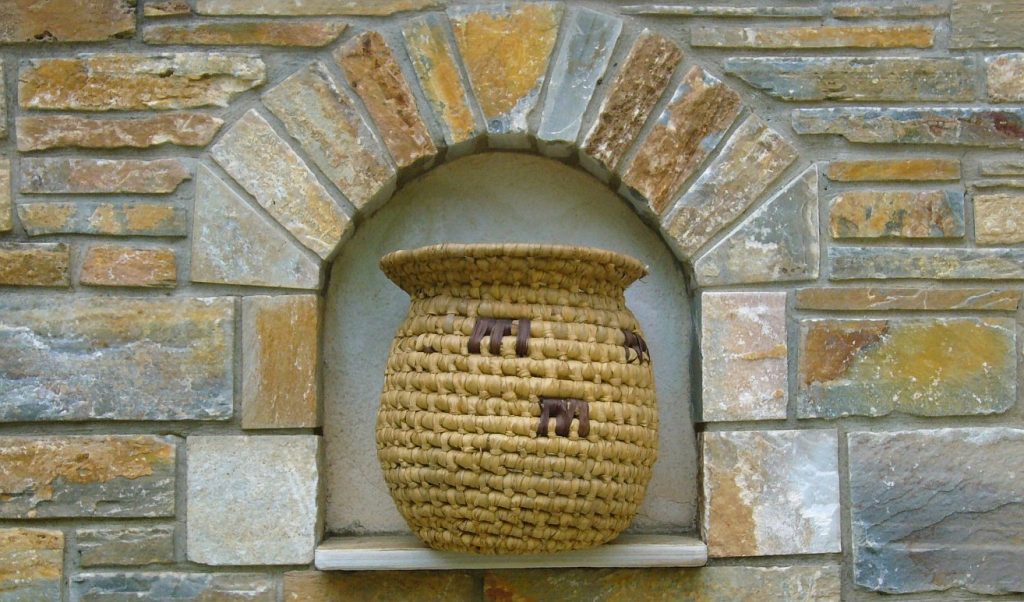 This little basket has a history. It’s one of my most precious possessions. A great many years ago my Mother helped a Zulu woman who had come to our back door. Several days later the woman returned in order to give this basket she had woven to my Mother. Mother was overwhelmed by the generosity of a rural woman who had so little in material terms, and treasured the gift. It’s worth noting that she had walked many, many miles to come to our home. Barefoot. In the blazing sun. My Mother kept her knitting in it until I, by then in high school, relieved her of it to store my knitting needles. 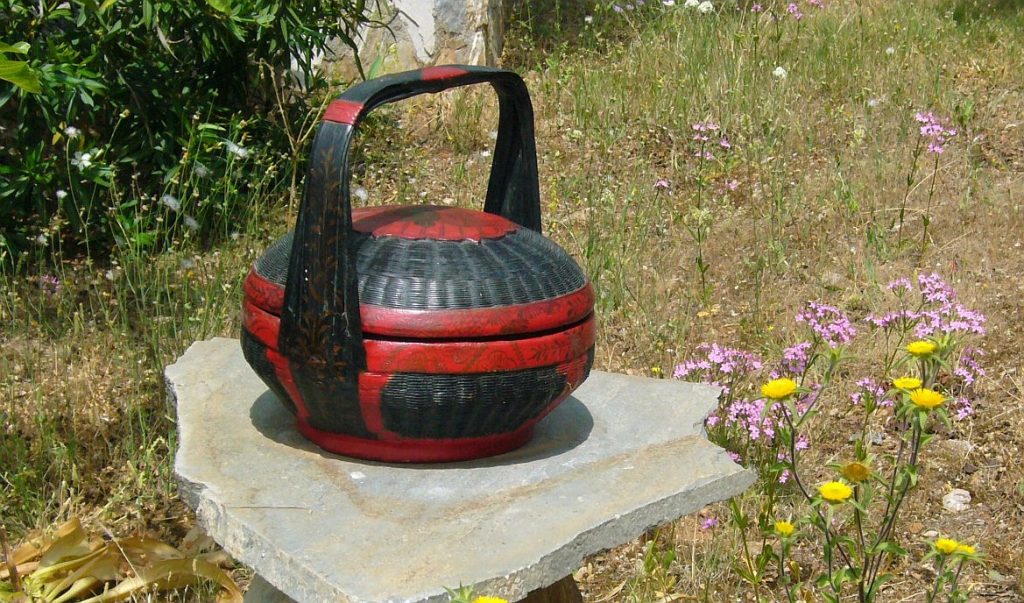 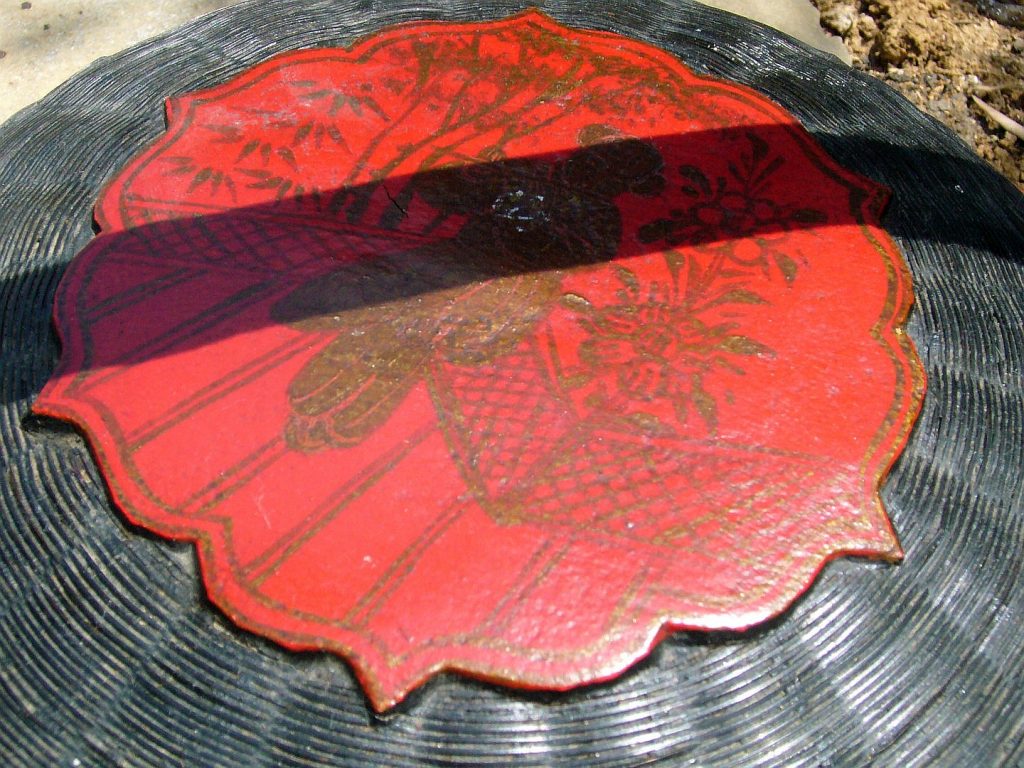 Ron’s Mother purchased this beauty about 60 years ago in Taiwan. It’s a funerary basket, used to take food to the grave of a loved one. It’s woven of rattan, lacquered in red and black, with decoration in gold paint. I have no way of knowing if the female figure on the lid is a general representation of a mourner, or was commissioned for a particular person. Fortunately the basket suffered no ill effects from the mold although it was so covered in the gunk that no color could be seen.

Here are a few more from my collection. 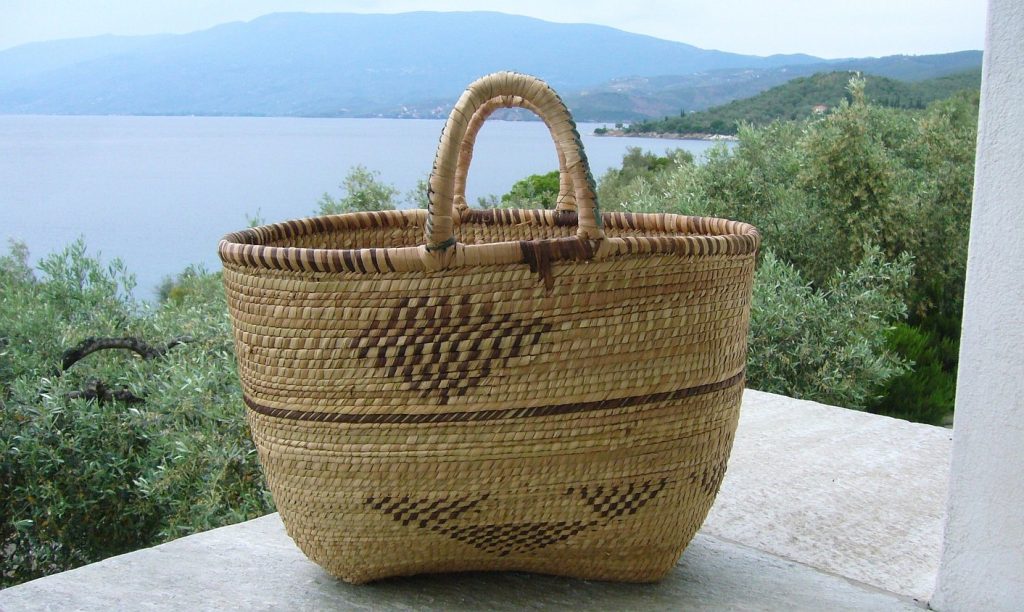 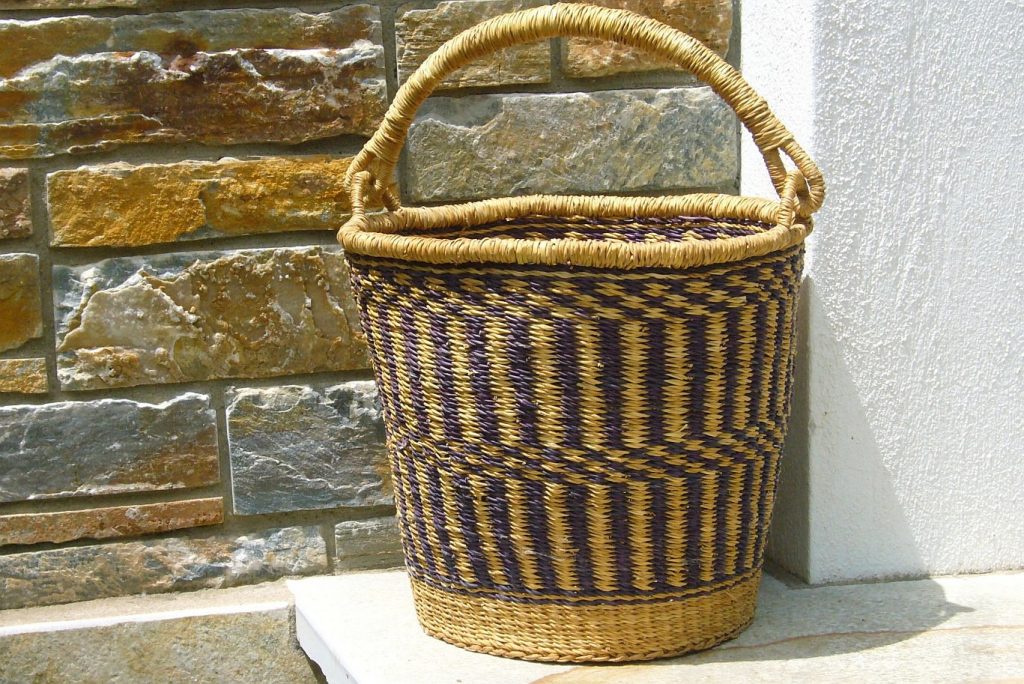 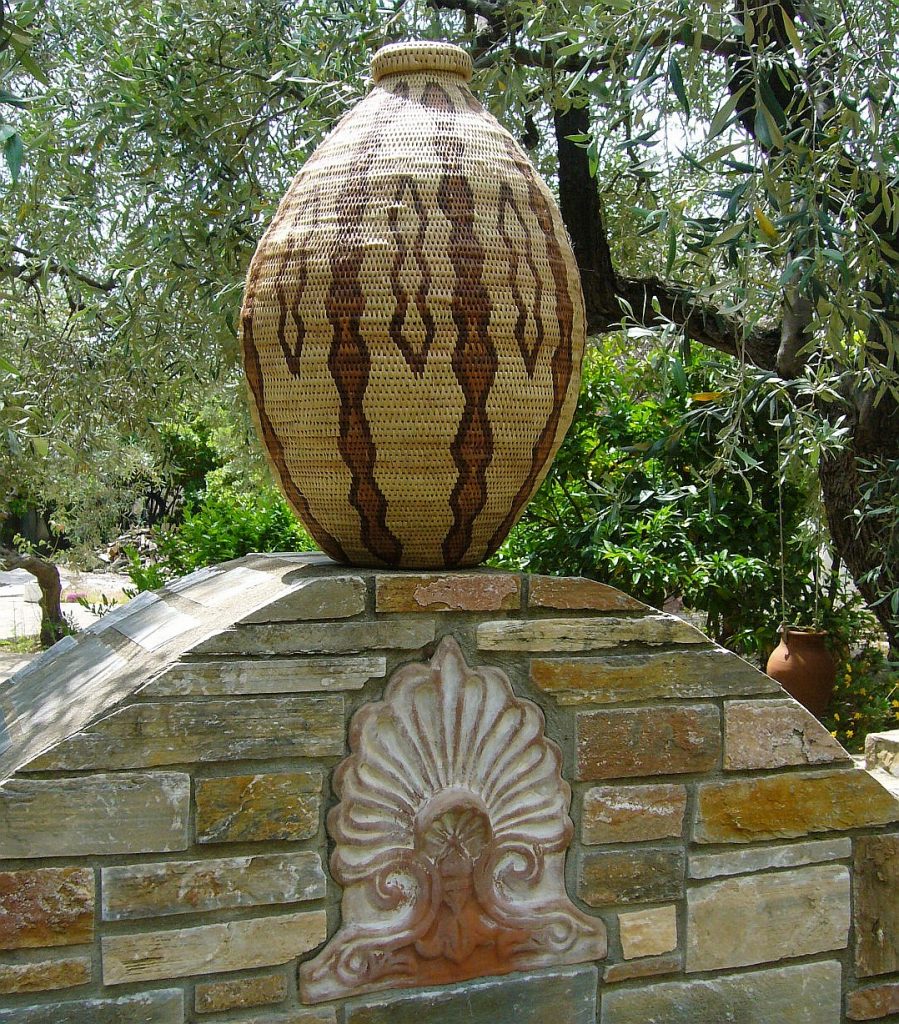 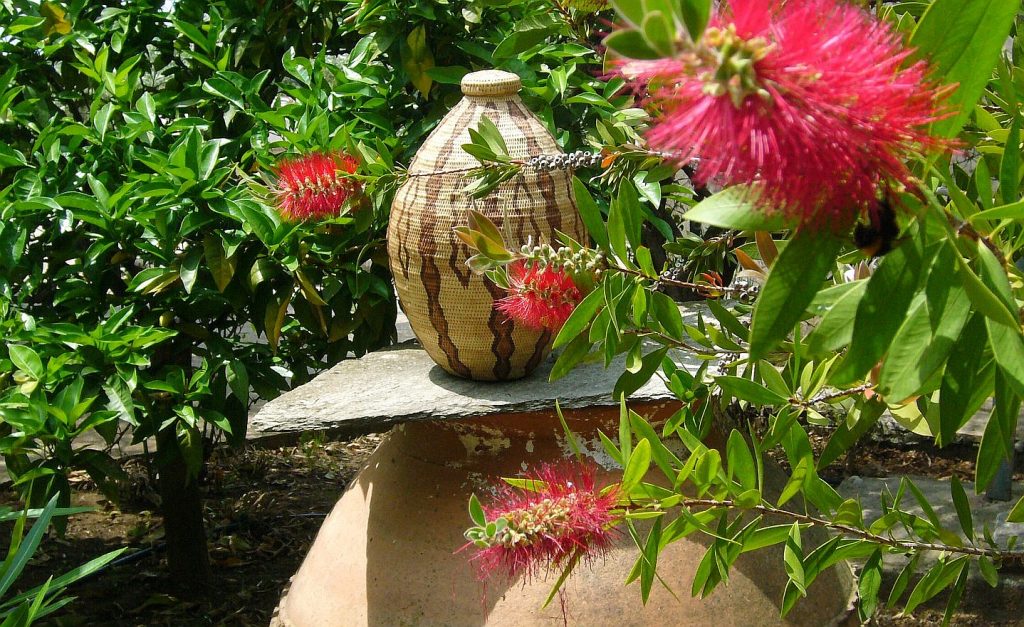 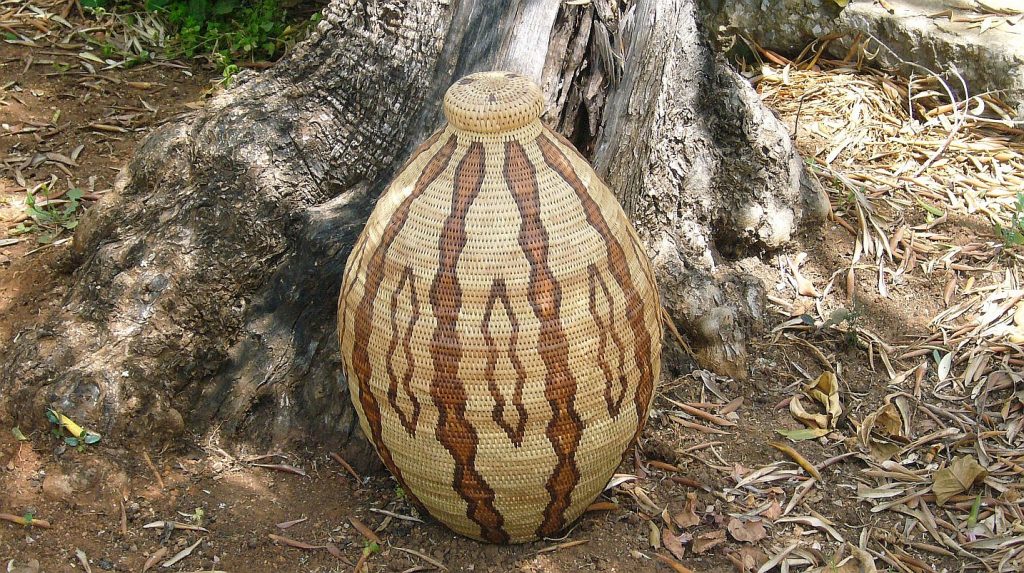 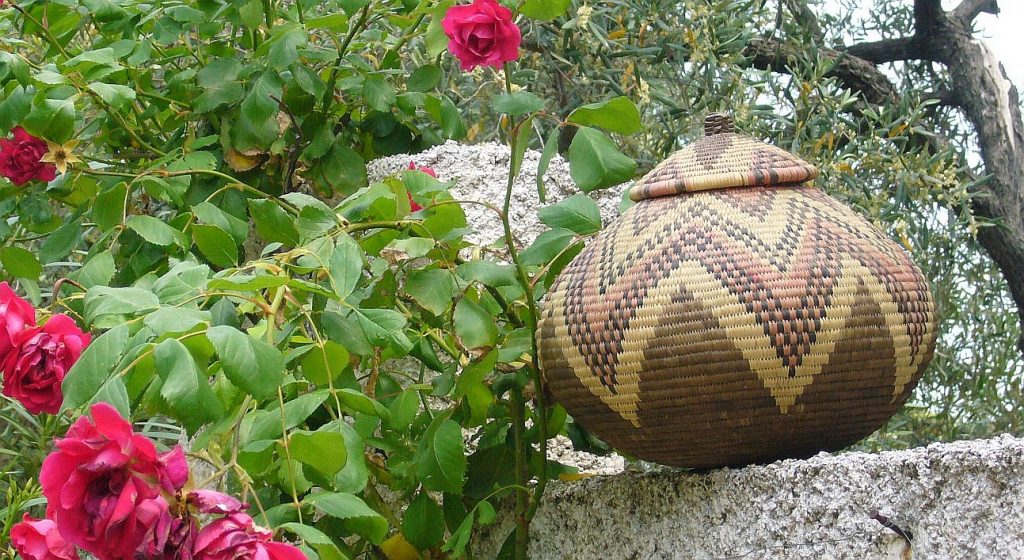 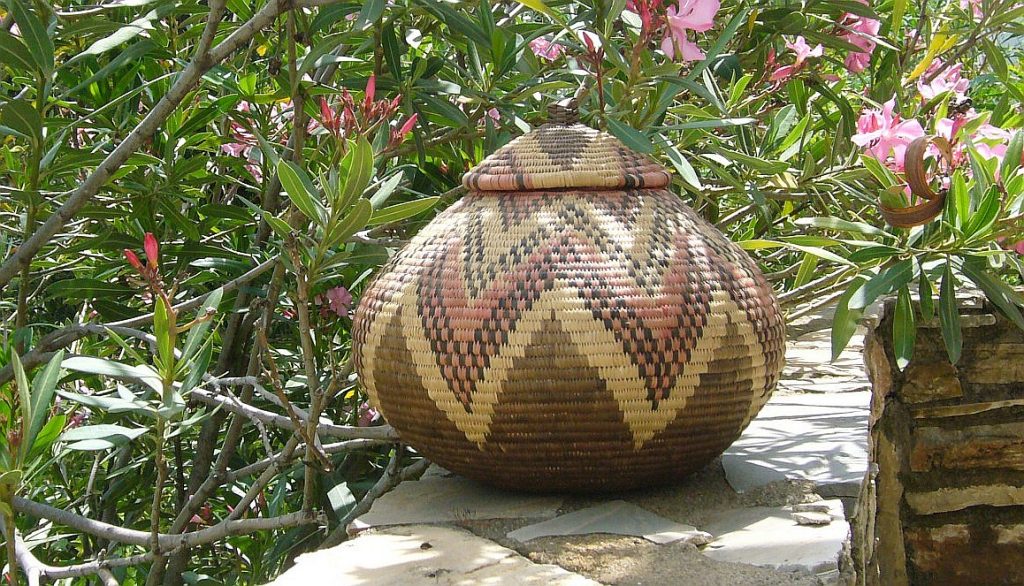 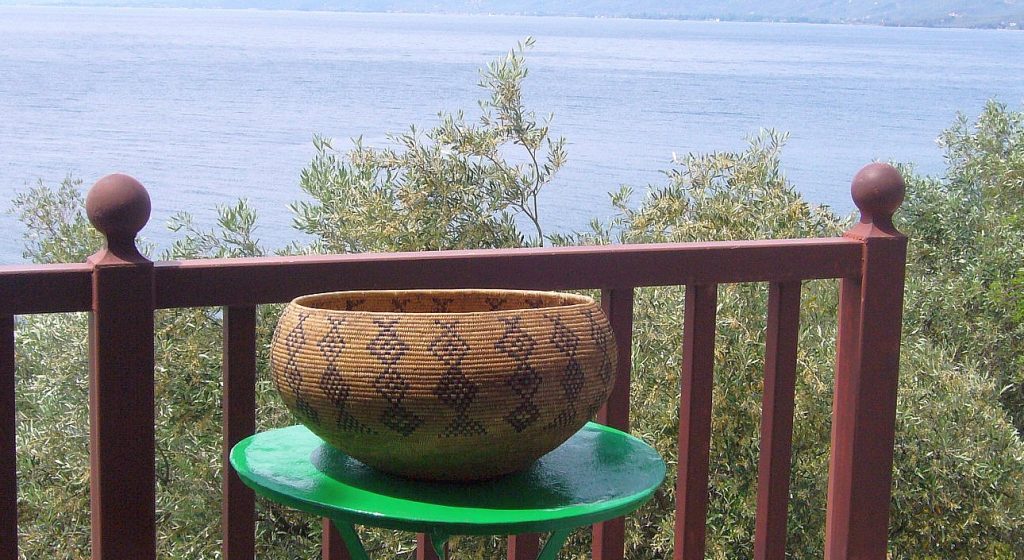 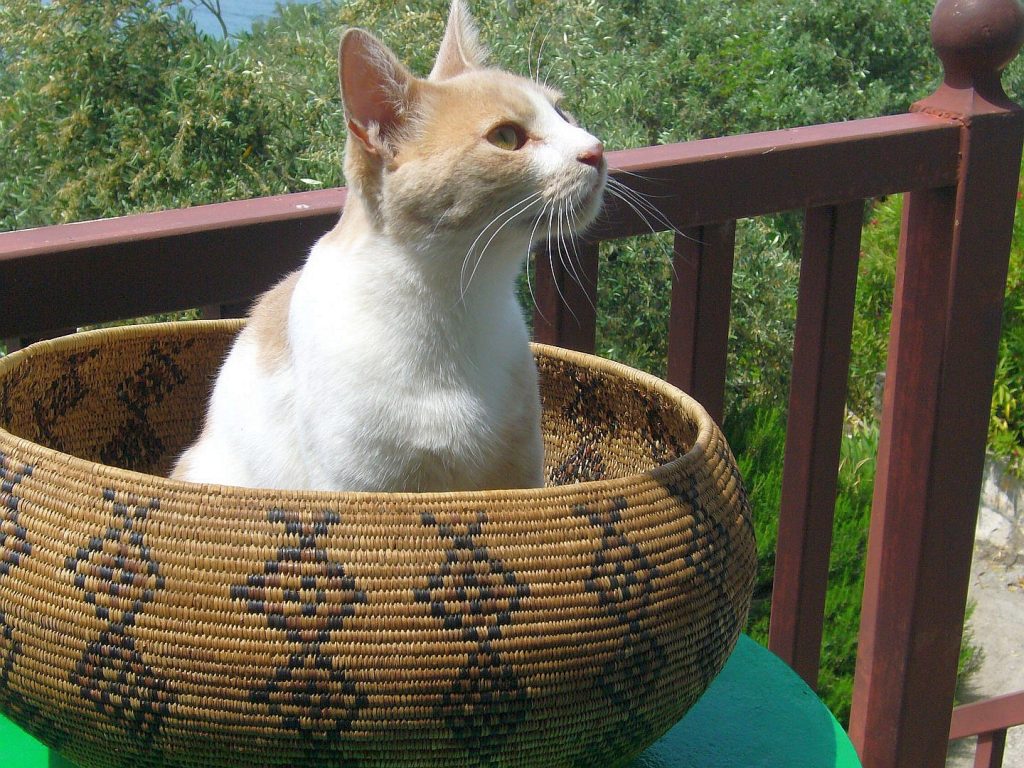 Yesterday my friend Carrie in Austin sent me these pictures of a basket she’s just made. 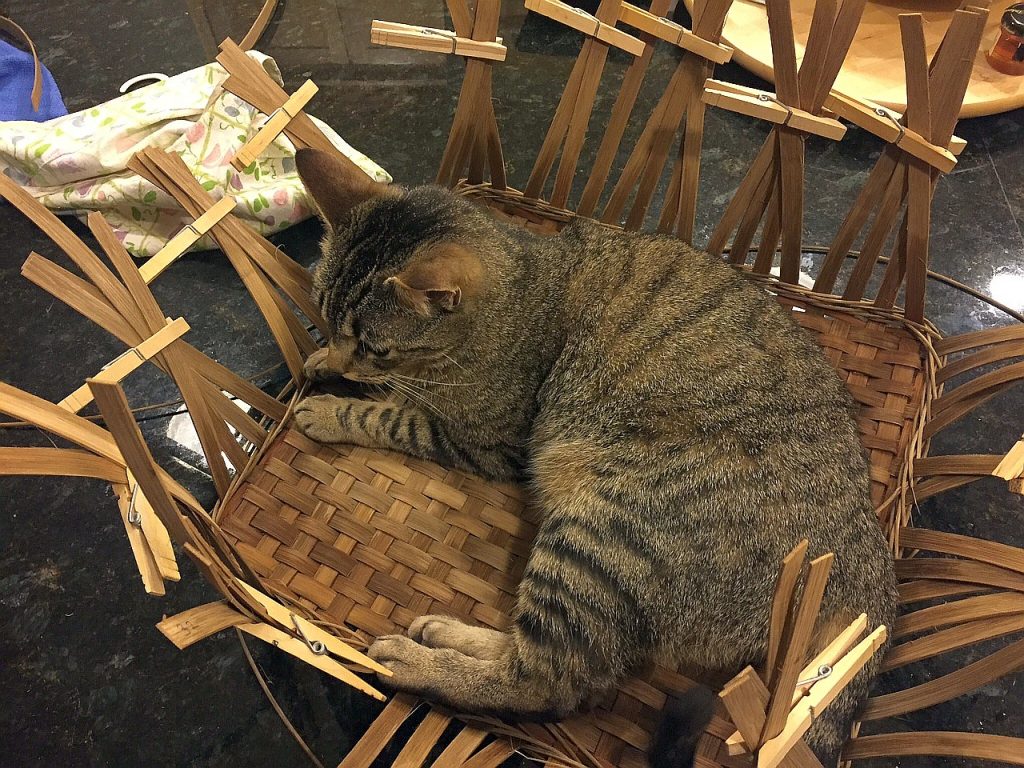 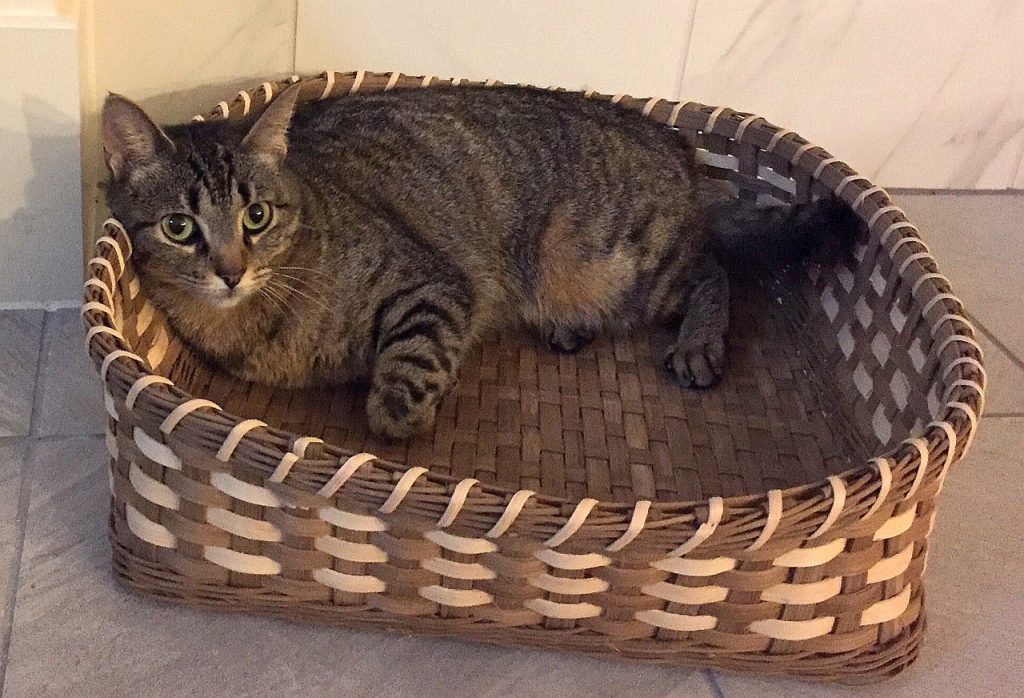