IS BUD ANY WEISER? 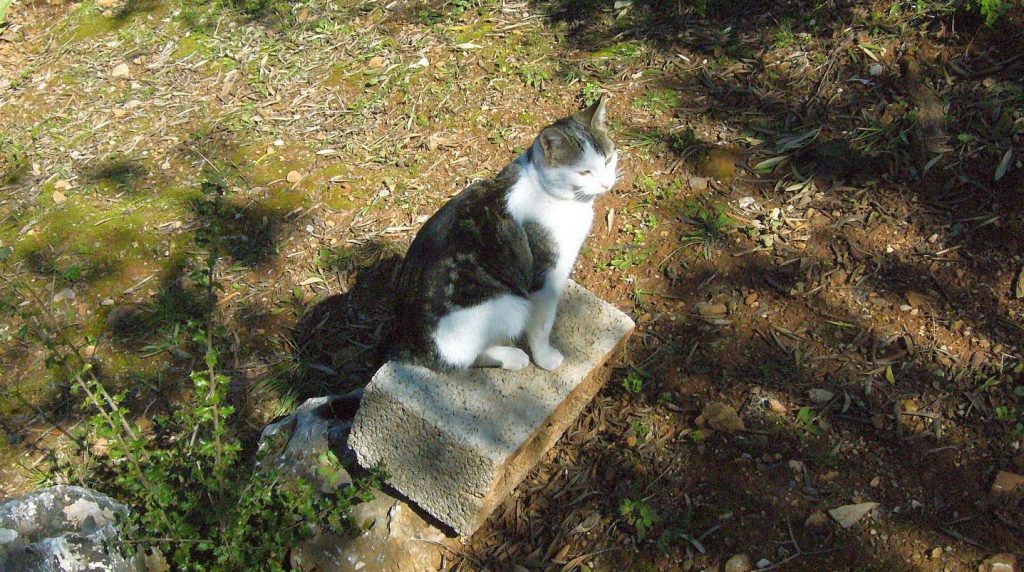 As I’ve already mentioned when we arrived back at the house there were kittens as well as adult cats awaiting us. Smart, those felines, for it’s relayed on the Kitty Underground that this is a Safe House. 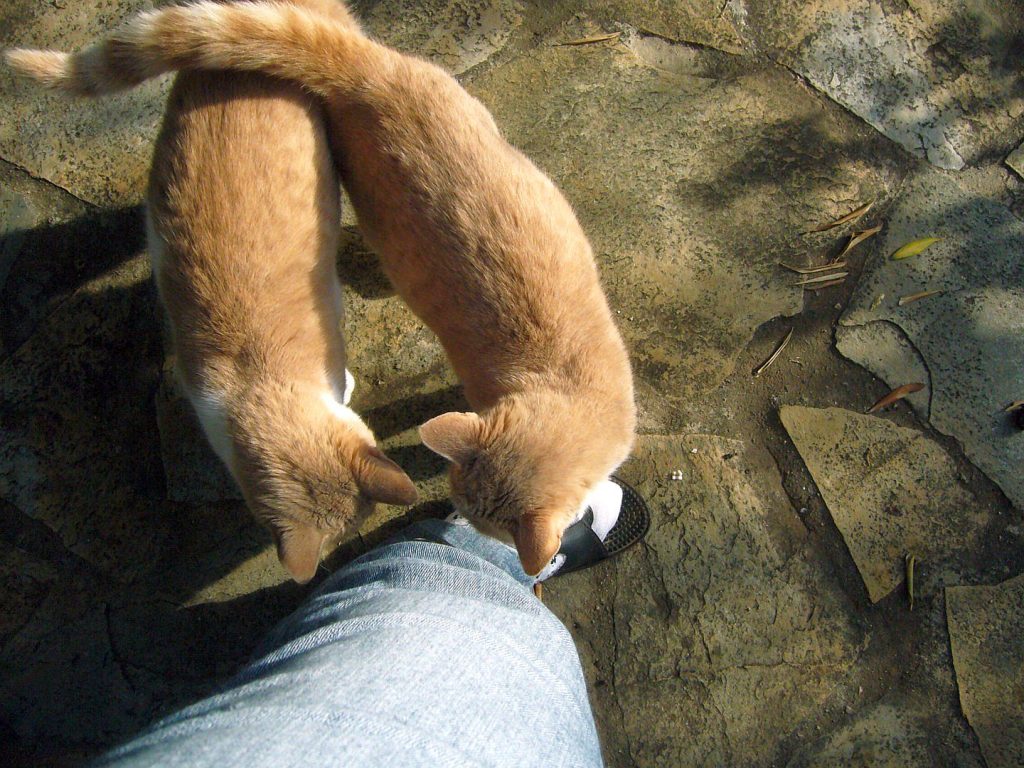 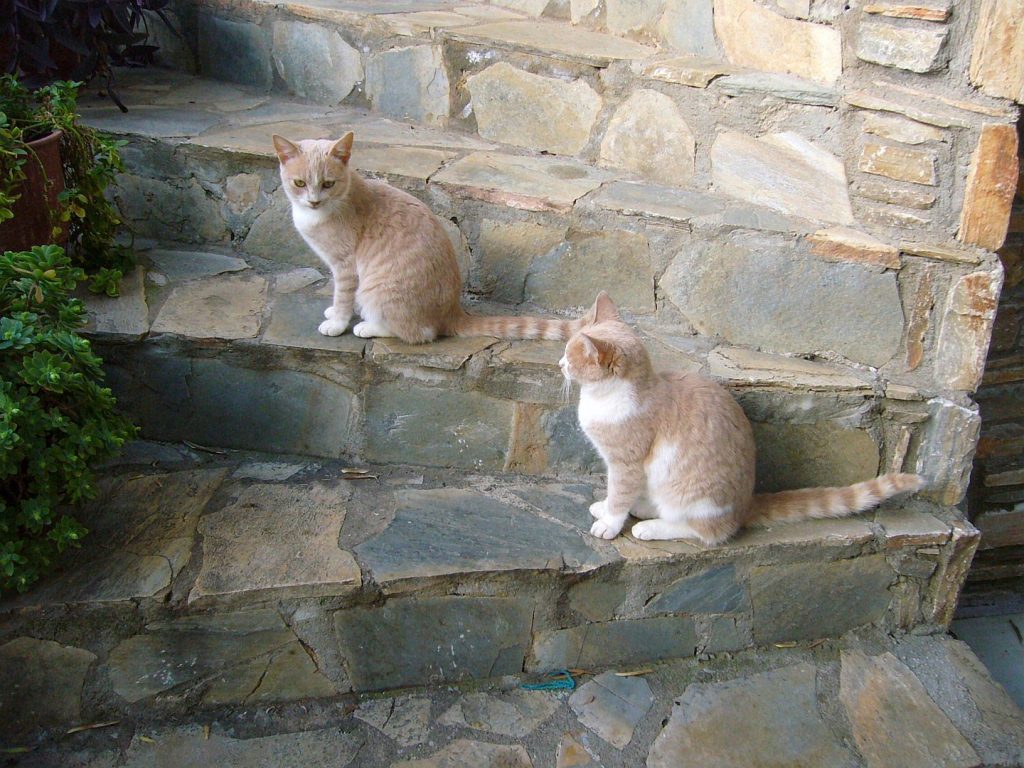 The Cappuccino Twins were watching warily from under an orange tree as we climbed out of Paul’s car. Raki was beside himself to see Ron again, letting it be known loudly that His Sultanship was somewhat miffed. I guess I underestimated him, all of them, for I was convinced that neither he nor Mythos, Retsina and Ouzo would remember us, but it was as though we’d never left. Freddie and Kosta were with them all the time we were away; they and Stella had been anything but neglected.

Amidst the hustle and bustle of unloading I became aware that the Cappuccino Twins weren’t the only new kids on our rock. Far from it, for more and more wary moggies began creeping out of the forest as night fell. I admit I was dismayed. When finally I went to bed I was hoping that they’d depart for new accommodations once they perceived the house to be occupied by that great threat – humans. Some hope. 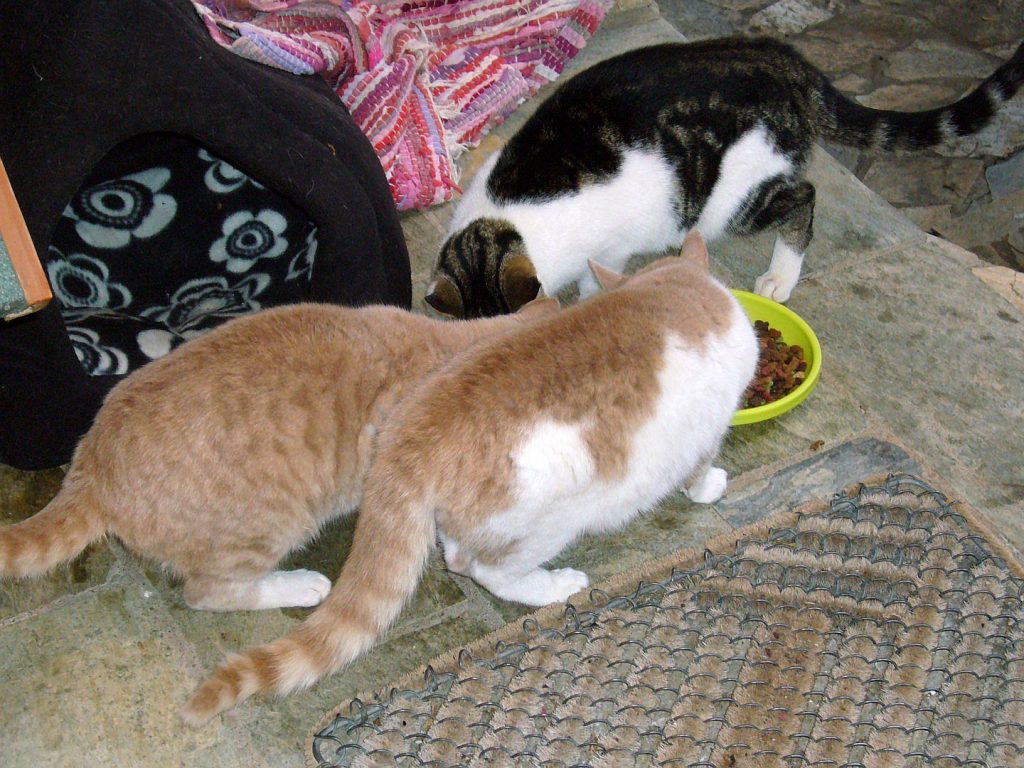 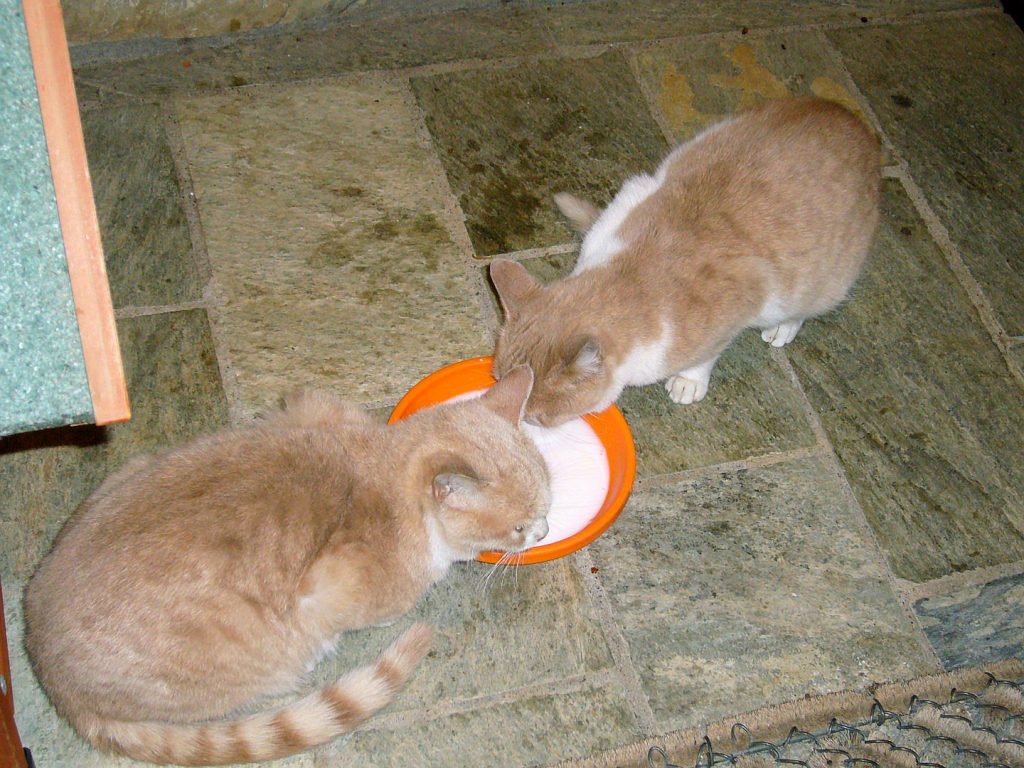 Clearly these two adorable girls are sisters. Grappa and Anise, as I soon named them, were waiting bright-eyed and eager on the porch when we awoke. No sign of fear, and their condition was good. Didn’t take me long to figure out that Freddie had been feeding them.

Not a problem, and even better was the fact that they were completely socialized. We have too many that aren’t. They arrive here driven by hunger, but are so intimidated that it’s impossible to tame them and as I’ve mentioned before this makes neutering very difficult. 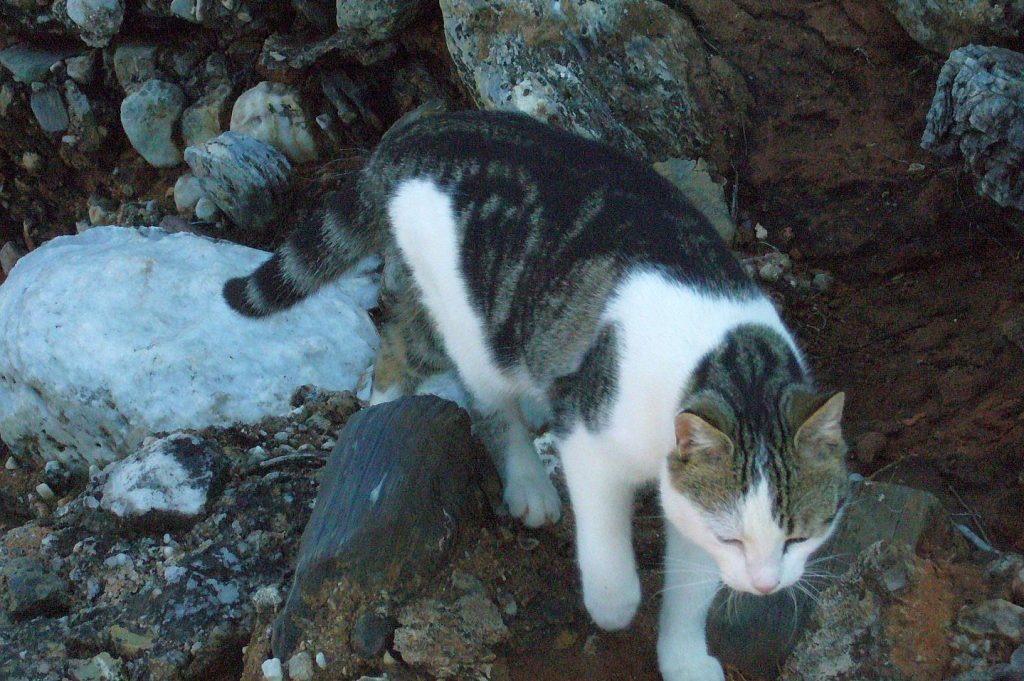 A few days later along came their brother, soon to be dubbed Budweiser. I don’t know where he’d been but the twins were thrilled to see him. Freddie confirmed that he was with them and their mama when they’d first arrived at our house and as he was the same size as the twins, it’s safe to assume they’re littermates. 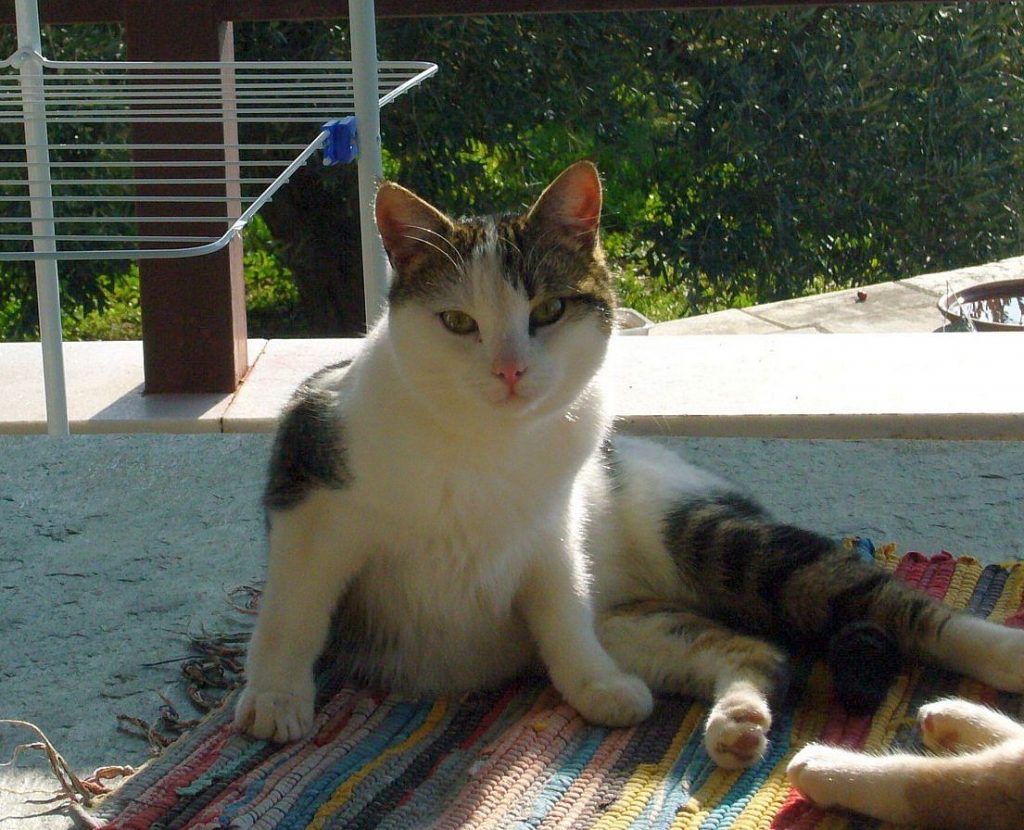 He’s a real cutie is Bud. Most affectionate, with a tiny little voice, Bud’s fond of communicating by way of the Silent Miaow.

He’d been extremely lively, fearless to the point of foolhardiness and had to be rescued on a number of occasions. It was interesting to watch him at play with the twins who are no slouches in the adventures department but Bud’s exuberance was unsurpassed. And then he began to cough. Just a little. Only occasionally. Not of any concern.

His cough became more frequent, so I dewormed him again. It made no difference, and we put this down to it needing a day or two to take the fullest effect. The cough became much worse. I suspected some form of cat flu for he’d not had his vaccines yet, but there were none of the other indications of such an infection.

Then he began wheezing. Not terribly, but he was definitely wheezing. Yet he’d lost none of his energy and was eating well, though I noticed he ate only the canned food and not any of the dry. Puzzling. 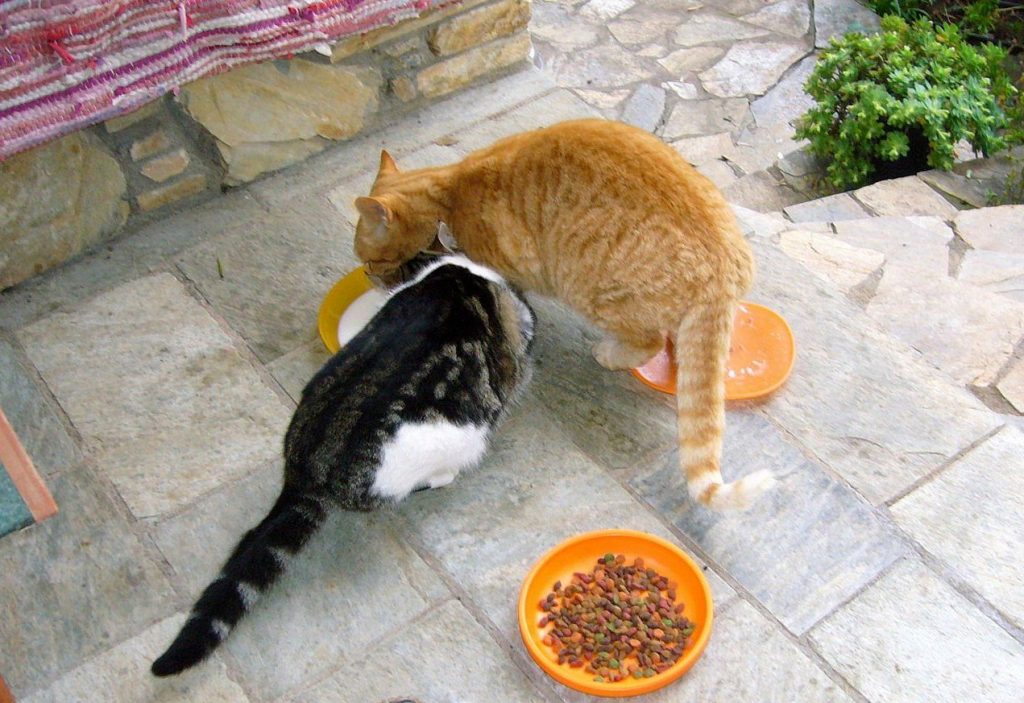 Several days later on a Saturday afternoon in February – some snow still about and the upper road a boggy mess – the wheezing suddenly became very pronounced, very bad indeed. We were extremely concerned. We are miles from our wonderful local vet Theresa, the best thing that ever came to Argalasti, who would not have been available at that time.

If there even is an emergency vet in Volos, it was pretty much out of the question to attempt the 90 minute drive with darkness approaching and snow on the ground. We felt we had no alternative but to put him to bed as usual. He and his sisters have separate beds, with heating, in a little room under the front steps, safe from predators of the night. 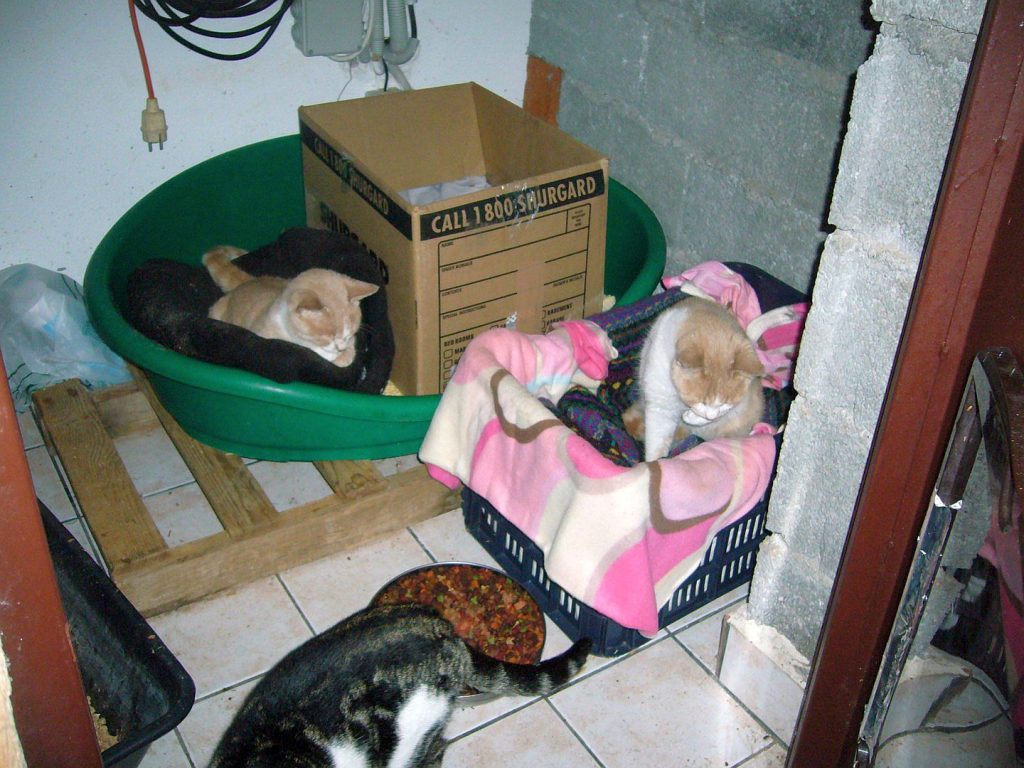 Sunday morning early we let them out, apprehensive as to what we would find. Bud emerged, coughing and wheezing as before, but as the day wore on it was clear this was no temporary affliction. He was getting weaker, struggling to breathe, and perhaps the most alarming was that Raki was willing to tolerate Bud on his chair.

Raki, that most possessive of cats, must have sensed something about Bud’s condition that softened his self-absorbed heart. We cuddled Bud and fretted all day until we locked him up for the night, anxious for Monday to dawn, anxious that he’d not get through to the morning. 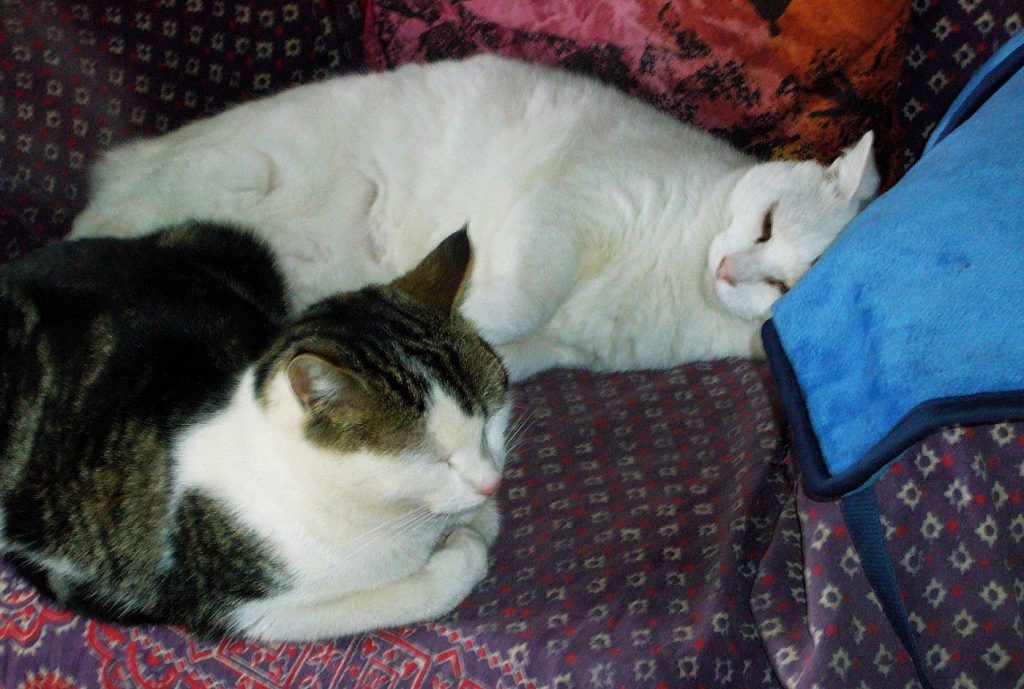 When we opened his door on Monday we could see at once that Bud’s efforts to breathe left him in a state of near collapse. We were very alarmed. Having taken care of the rest of the furry and hairy ones early we left immediately with Bud for Argalasti, I trying to tune out the distressing sounds from the cat basket where he lay exhausted.

Theresa was her usual calm and reassuring self. She confirmed that Bud had no infection, and turned her attention to his mouth and throat. Bud resisted all her attempts to look down his throat, so she sedated him and after a few minutes he was limp enough to be examined.

“Ah,” she said, “see what’s here in the throat. The trachea is almost completely closed. He cannot get enough air through this very small opening. There is something in his throat that’s making such a big swelling that he cannot breathe. Look.”

“No thanks,” I muttered, but Ron peered at what she was indicating. Apparently the throat and junction with the trachea were greatly inflamed.

Theresa outlined the possible diagnosis. “There is something stuck here. I cannot say what it is. I cannot see it because the tissue has swollen up so much around it that it’s not possible to see. He will need an X-ray and that I cannot do. Probably he will need an operation. You will need to take him to Volos.”

A German who fell in love with and married a Greek, Theresa is a pragmatist. She’s a gem of a vet, a lovely person, mother of three, and very, very practical.

“What I can try,” she continued, “is to see if I can reduce the swelling so that I can tell better what is going on. You need to leave him here with me until at least Thursday.” This may not sound like a big deal but it is, for Theresa doesn’t have a large surgery, and does not typically keep animals overnight. 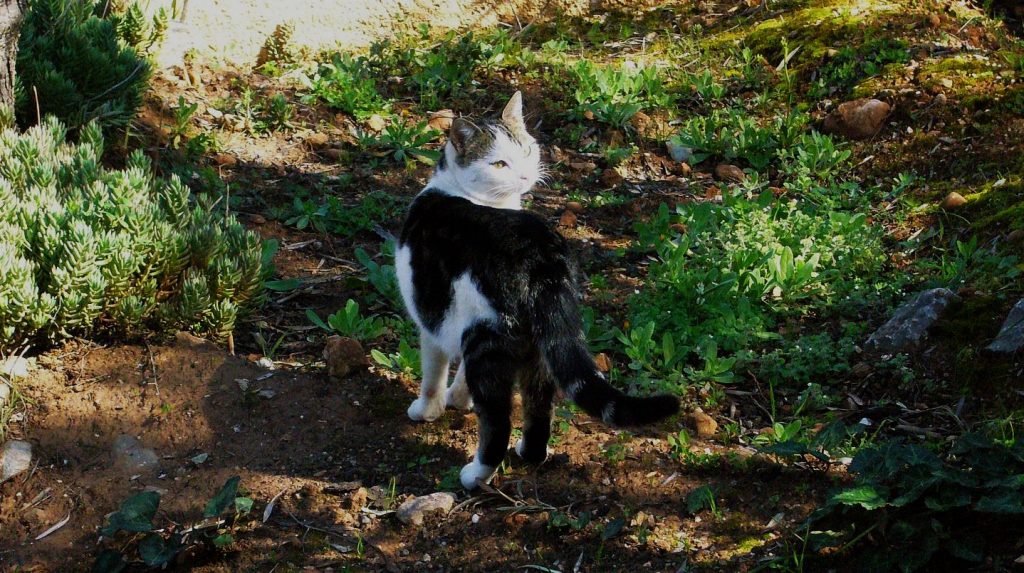 And so Bud stayed on in Argalasti. Theresa called in the evenings to report on his progress. He was on large doses of antibiotics and cortisone, and was beginning to improve, but what ailed him she couldn’t tell. She’d taken the opportunity to attend to his little buds, so that meant one more could be ticked off our neutering list. We collected him at noon on Thursday, and took him and his medications back home.

She’d prepared the syringes for Ron to give antibiotic shots over the next four days, and we crushed cortisone tablets into his food twice daily for many more days. Theresa could offer no guarantees, but the hope was that the crisis might have passed, and Bud would be spared the trauma of Volos and surgery. 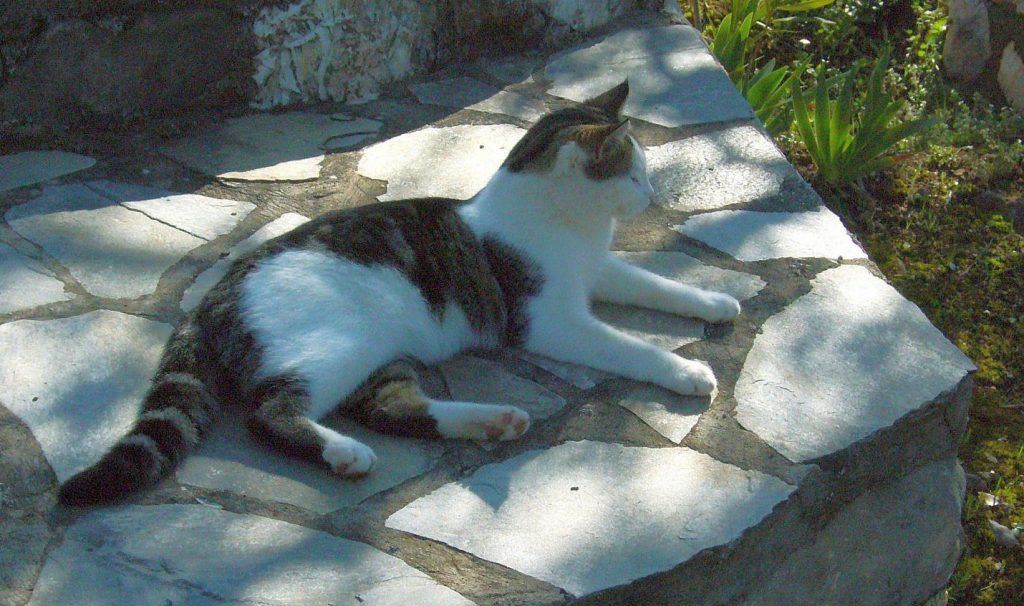 Bud got better by leaps and bounds, quite literally, but he was thin and soon was obviously smaller than the Cappuccino Twins. His story doesn’t end there though, for the irrepressible Bud was racing headlong towards another and very different crisis, one which was to involve me directly.