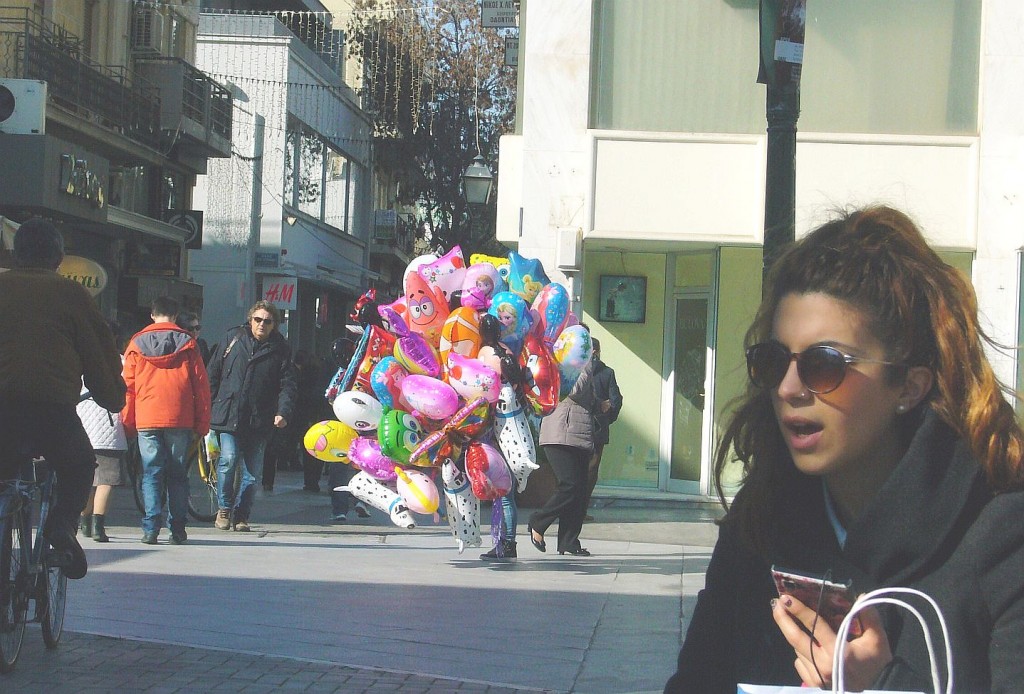 Ermou Street, referred to simply as Ermou, is an important shopping district in Volos. It’s been pedestrianised and is largely free of cars, though it’s criss-crossed by streets running from the harbour on up towards the mountain. Vehicles travel along these streets but it should not be assumed that drivers will automatically stop at the zebra crossings. What typically happens is that one or two people wait as cars carry on through regardless, and when enough have formed an increasingly impatient cluster they surge across.

The shops along and around Ermou are brimful of goods, varied and interesting; coffee shops abound. This past Friday I settled myself with my purchases on a bench in front of the cathedral to wait for Ron and watch the world go by. 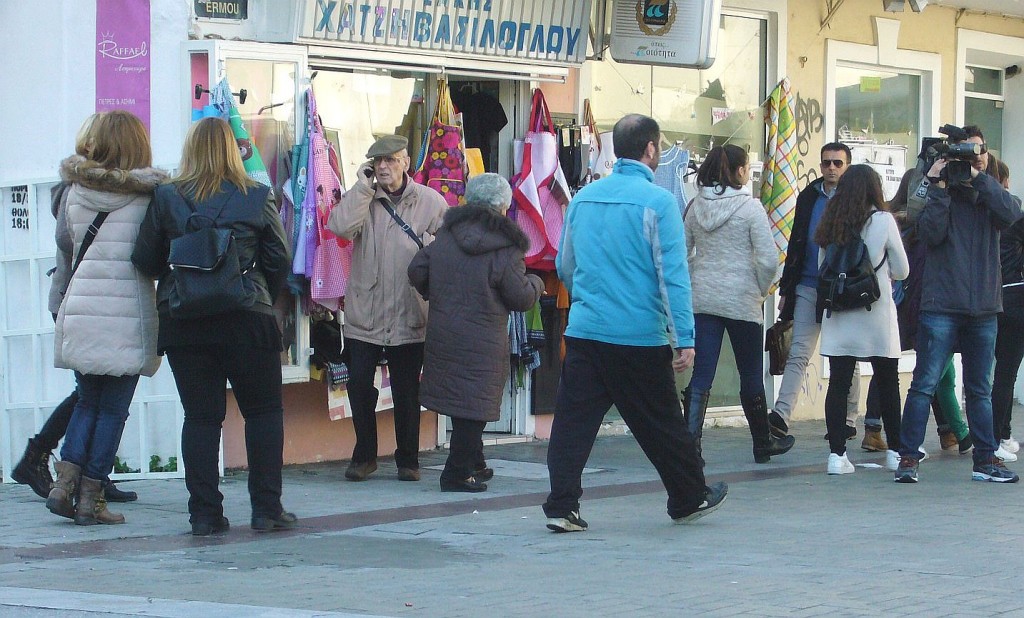 This area is perhaps the heart of the city, almost always bustling unless the weather is particularly foul. It’s quite impossible to be bored if you’re at all inclined to people watching. 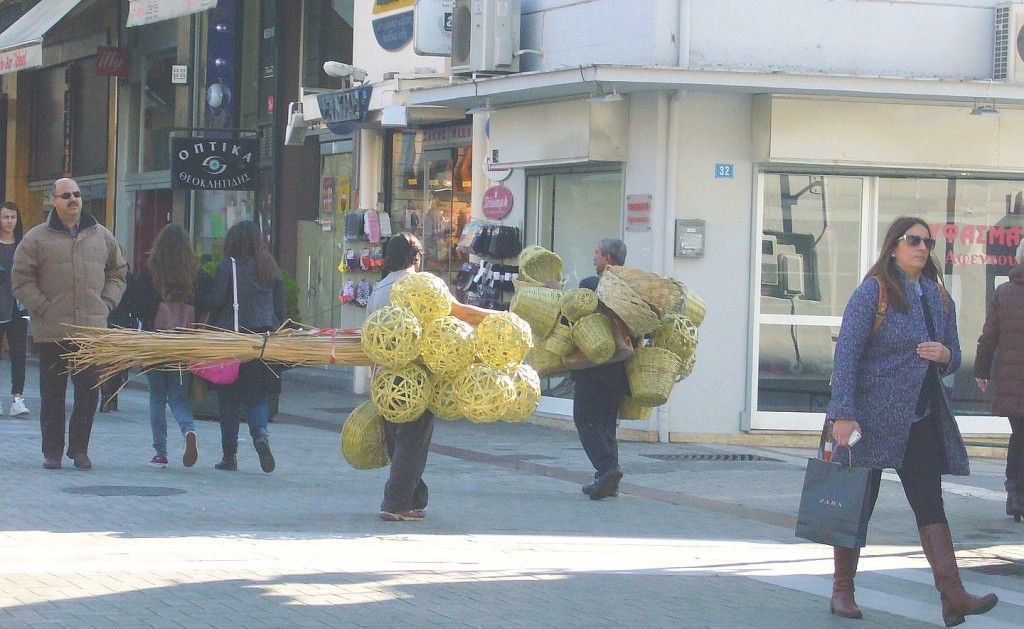 Wait long enough and you’re almost certain to see a large slice of society. Observe a little closely and Volos will reveal herself in all her layers. 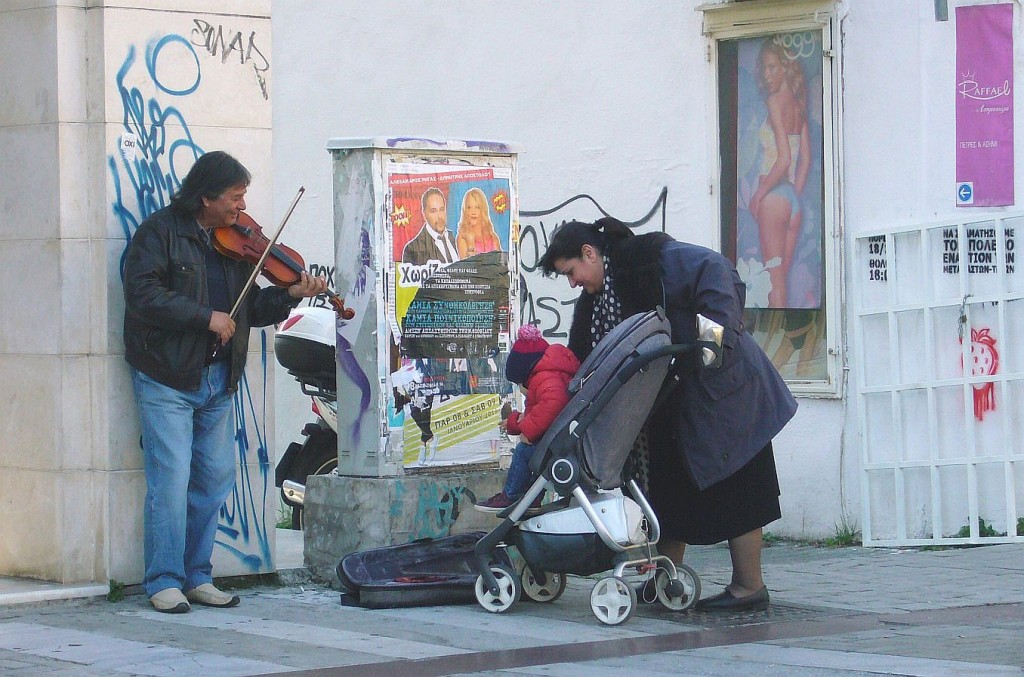 This cheerful violinist, always smiling and often interrupting his playing to greet a friend for a brief chat, is pretty much a fixture at this spot. His choice of pieces is rather fixed also, comprising the schmaltzy mixed with the occasional polka, but he’s an entertainer after all, a busker performing to the tastes of his perceived audience.

A woman pushing a young boy stopped. “Listen to the lovely music,” she enthused to the kid. “When you’re older you’ll learn the violin, and then you’ll play just like this clever man.” The musician obligingly smiled and jiggled about while the kid stared impassively at him, showing no interest at all until the woman tossed a couple of coins into the violin case. Perhaps the child is destined for a career as a classical music critic, or maybe he’ll concern himself with matters financial.

The violin was emitting strains (in more ways than one) of Tschaikovsky when an advancing group to the right caught my eye – an orderly protest by staff of the state-run home for the aged. 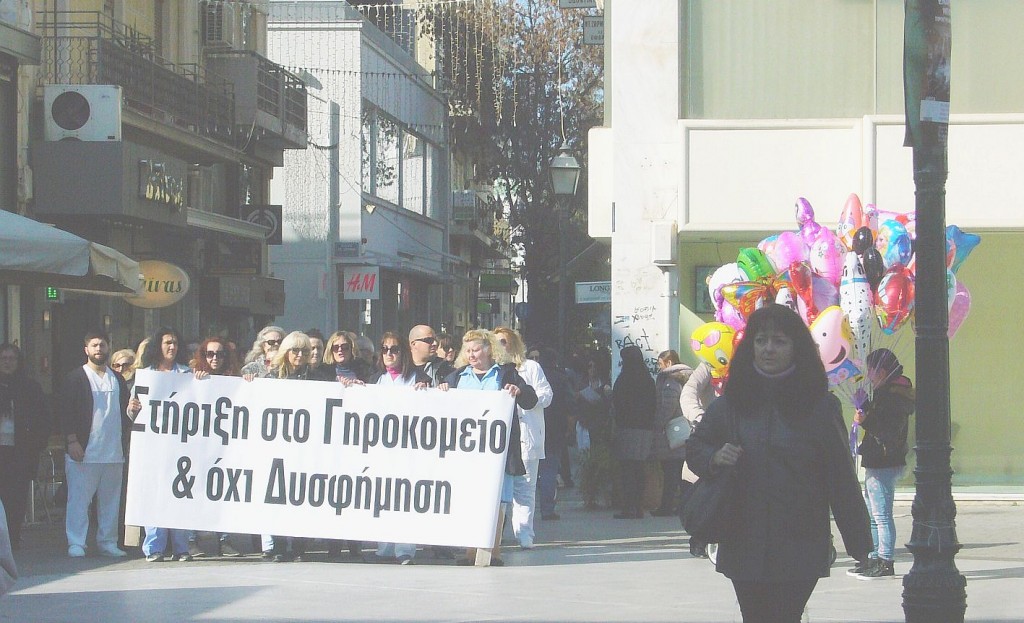 Greece is in a ferment over plans to cut pensions, representing yet another hardship in the lives of people already heavily burdened financially. The care workers grouped themselves a couple of yards from me, standing quietly as helpers handed out leaflets explaining the issue. 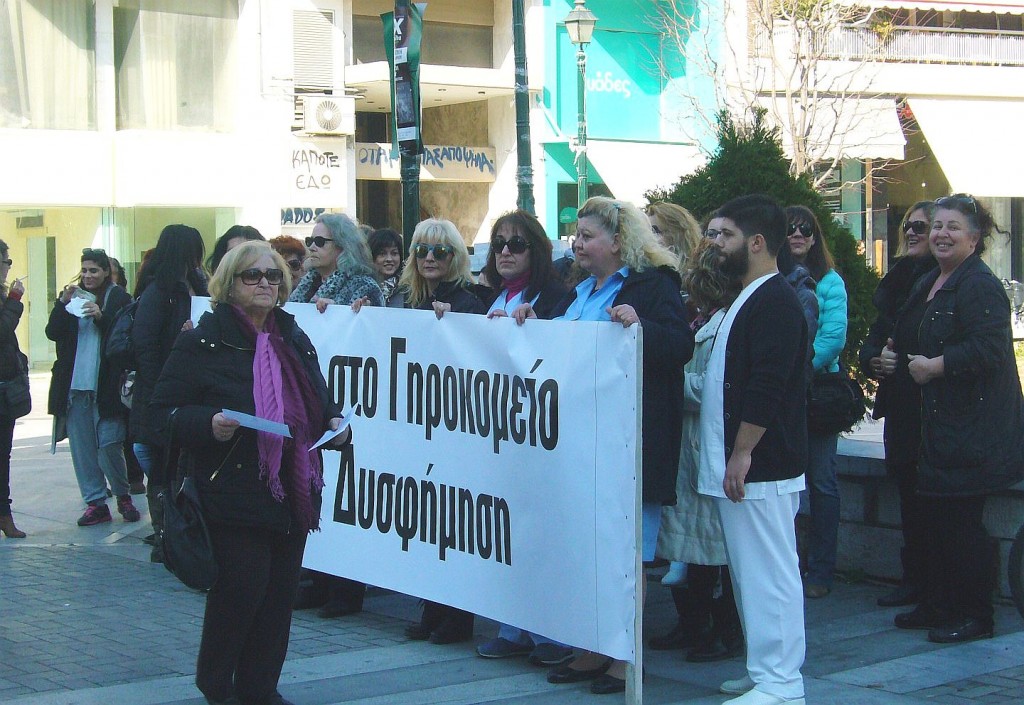 Soon television crews from various stations arrived to record the event for the evening bulletins. 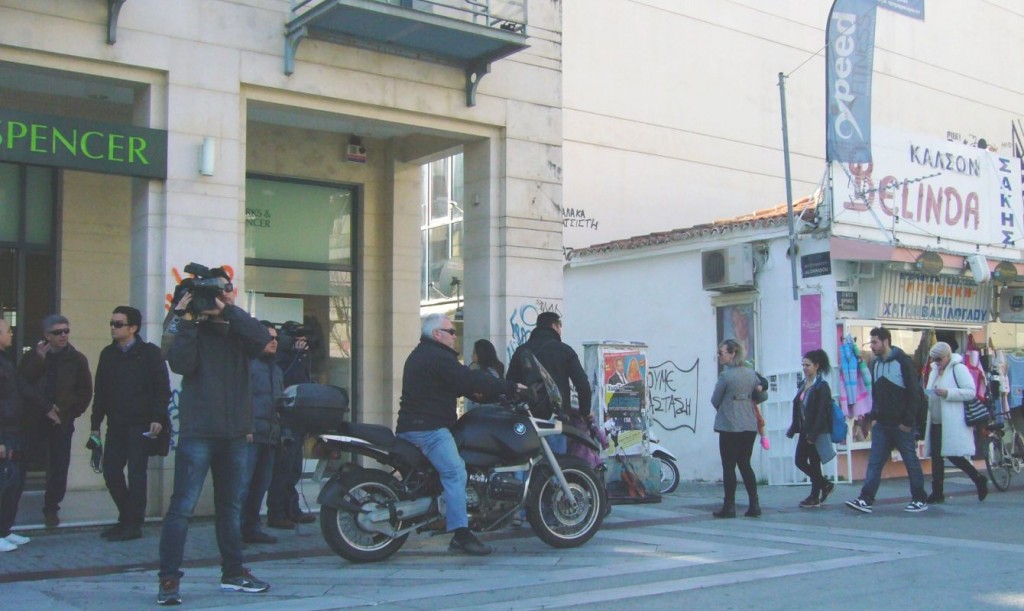 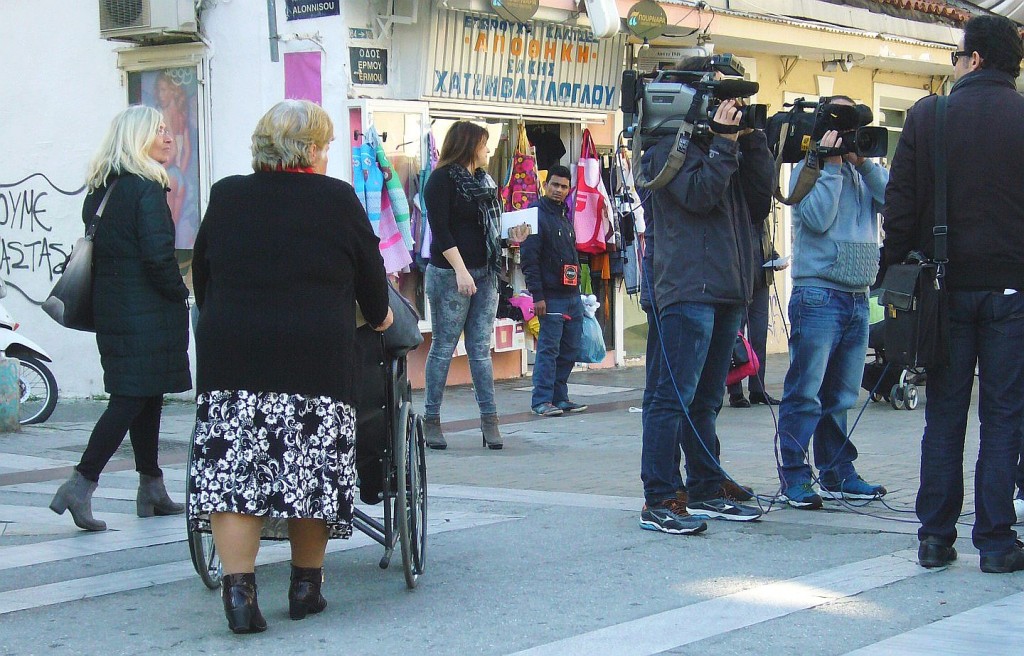 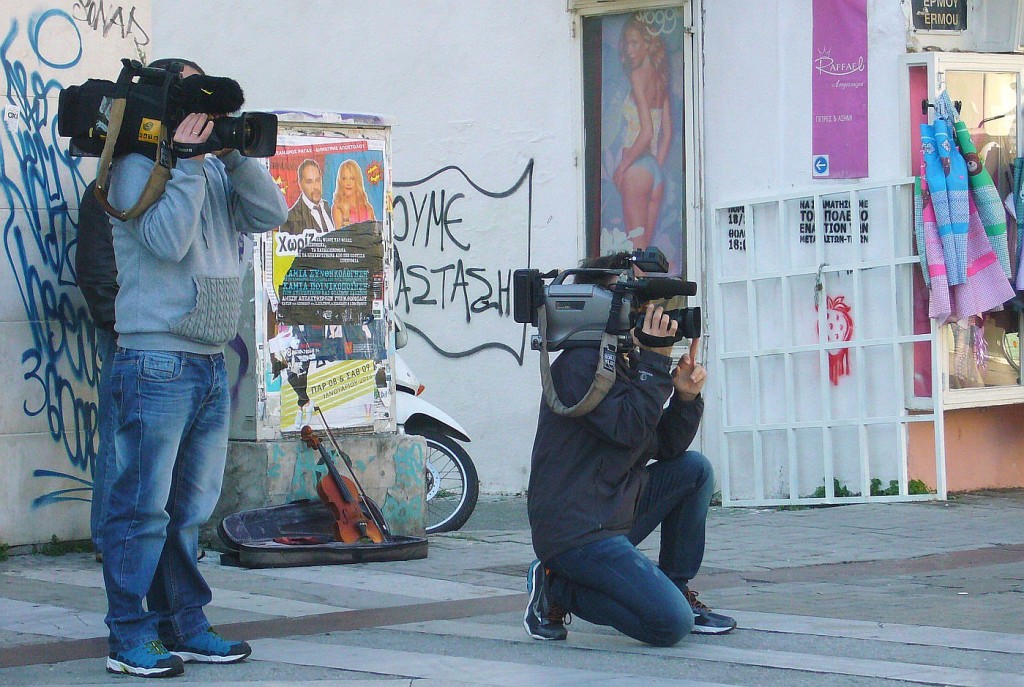 The cameramen drew the attention of passersby, some of whom used their phones to take their own pictures, but mostly the demonstration attracted little interest, and people went on their way. 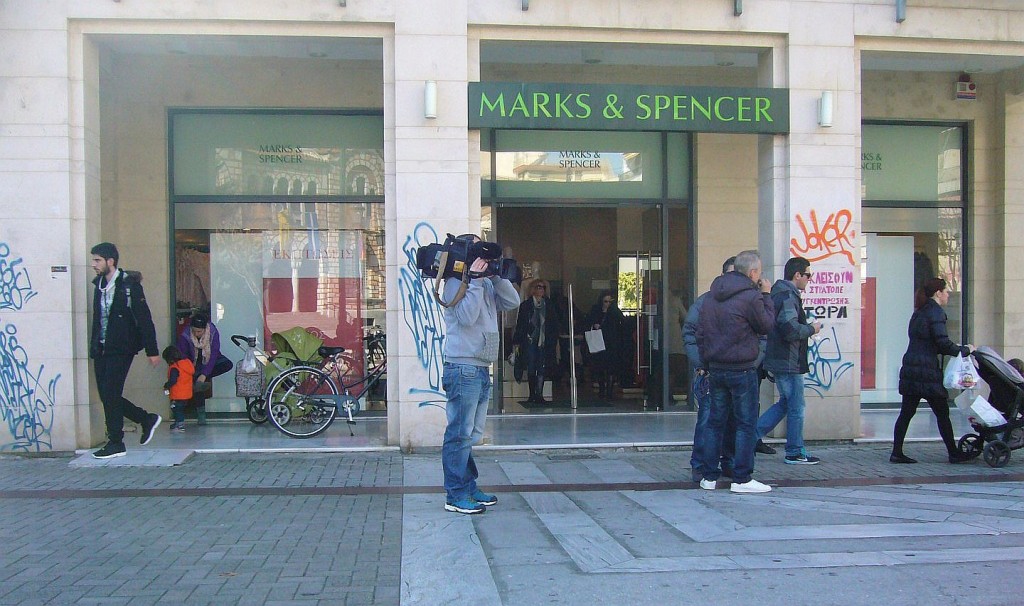 Tschaikovsky was replaced by Strauss, but as the reporters began to assemble in front of the protestors, the violinist gave up the performance, leaning back to watch the proceedings. 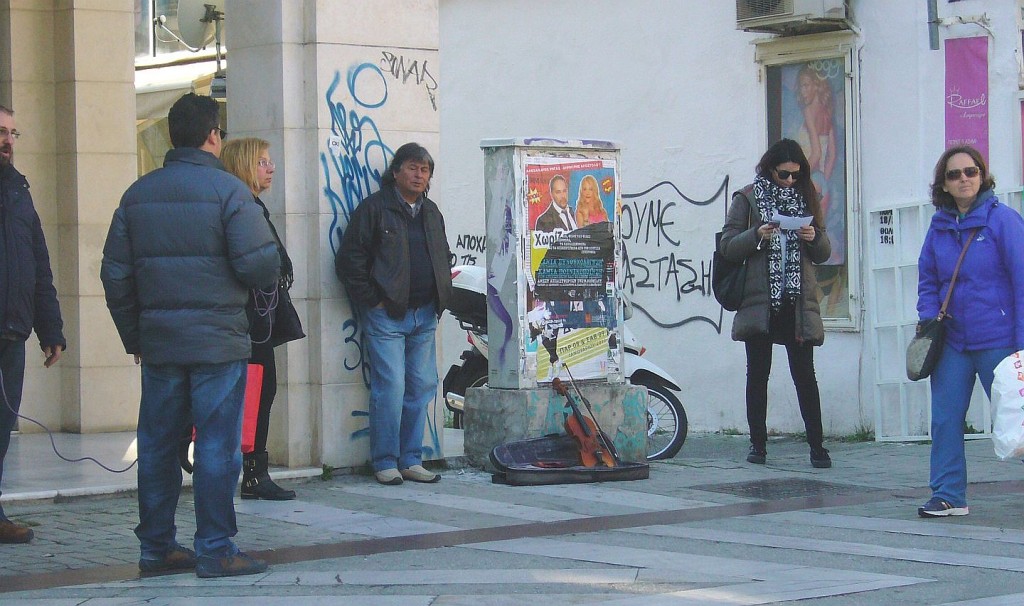 It wasn’t long before his hands needed something to do, and a cigarette was fished from his pocket. 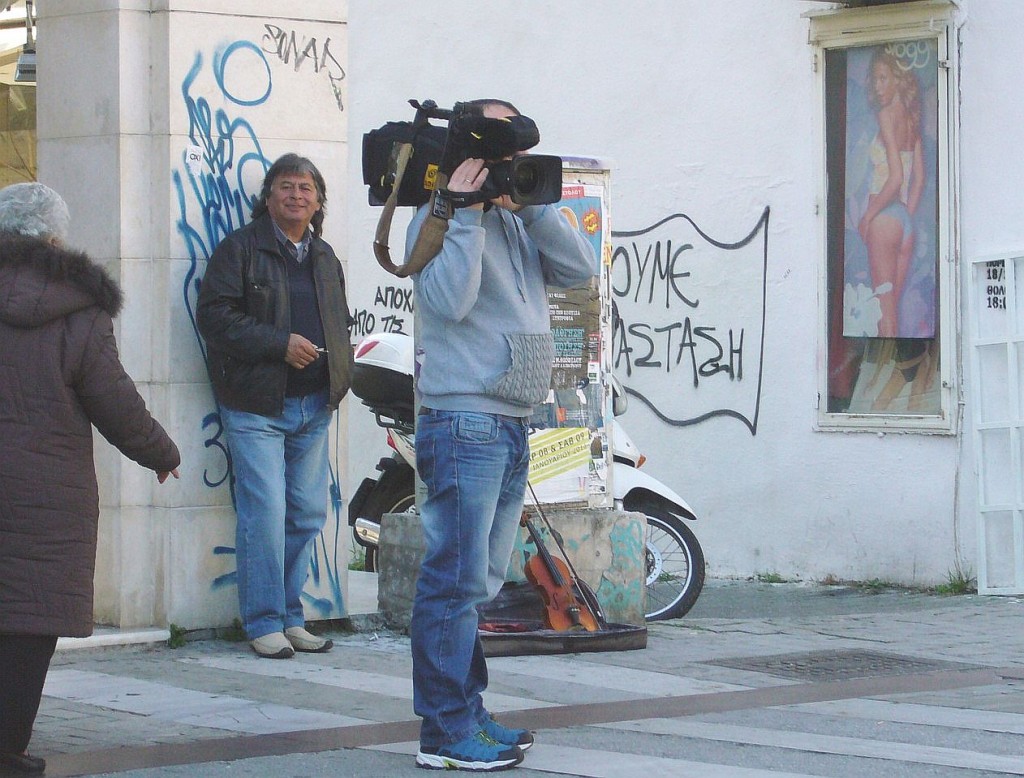 The journalists began their interviews of the staff, who calmly, quietly explained their position. I’m very much in sympathy with them, but it’s clear from the political rhetoric that the chances of success are slim indeed. 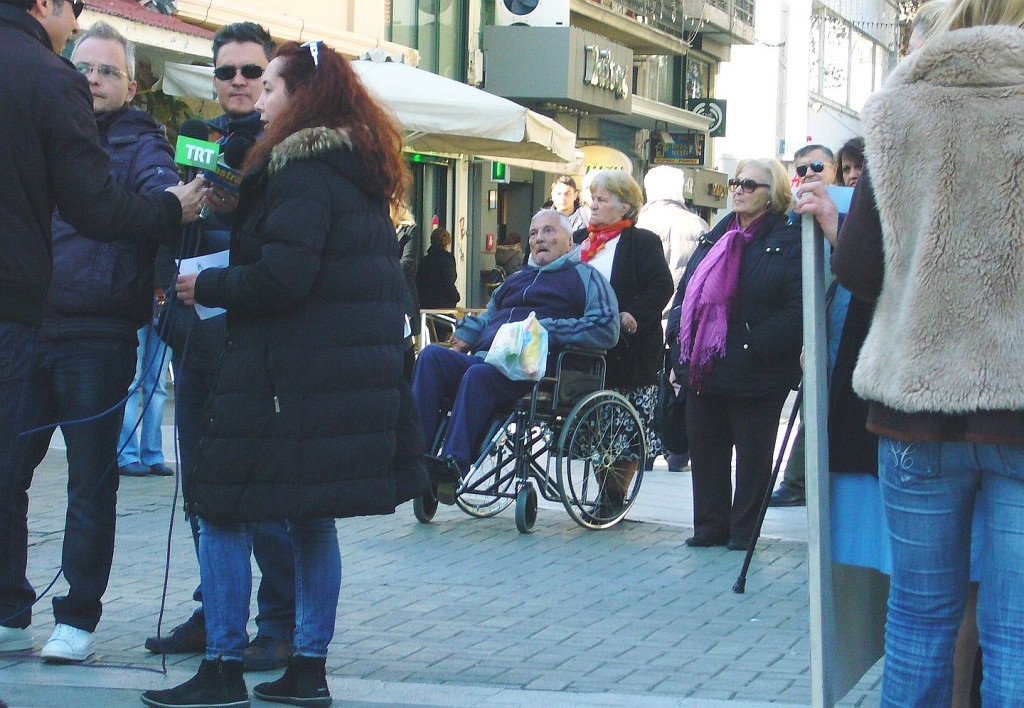 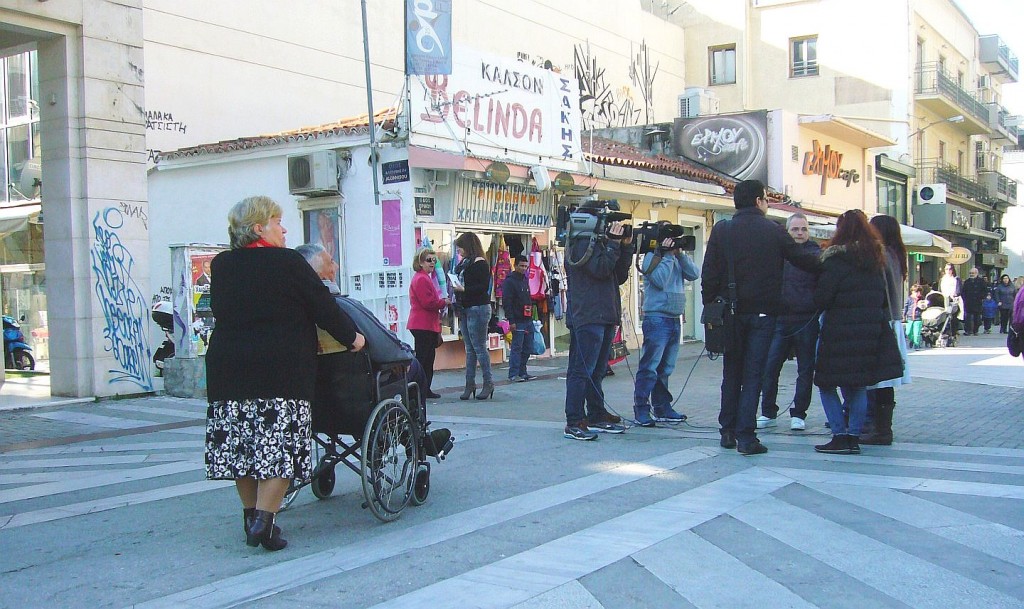 Rather a pragmatic soul is the violin player who noticed the crowds dwindling and decided to call it a day. Smiling all the while he packed up the violin and moved off, nodding pleasantly to me. Maybe I’ll chat to him next time I’m in Ermou.